An initiation into the Catskills 3500 Club

There’s treasure here at the summit, although it takes five minutes of wandering in circles to find it: A faded gray metal canister whose color nearly matches the bark of the tree it’s attached to.

I unscrew the top, gingerly reach inside and pull out a leathery plastic bag containing a spiral notepad and a few pencils. I flip through the pad, reading the names, dates and stories of the people who came before. When I reach a blank page, I write my name, the date and a note about the bears I observed on the way up. Then I return the notepad to the canister.

This is how you join the Catskills 3500 Club. There are 35 peaks in the Catskills that have an elevation of at least 3,500 feet. You climb them all. Four double as “winter peaks” and must be climbed a second time between the first day of winter and the first day of spring. About half of the peaks have no trails. Those are the peaks with canisters, to prove you made it.

The time limit? The rest of your life. The mountains aren’t going anywhere.

Friends have told me they find the adventure admirable. They say they’re impressed by my dedication. If you also are impressed, maybe you should stop reading and flip to the sports page. Everyone else, lean in and I’ll tell you a secret.

The list is an excuse. It’s a doctor’s note. When the mountains are calling, you wave the list around and tell yourself that you have a Very Important Quest you need to complete, when in reality you just want to romp around in the mountains. It’s much like how fly-fishing is a socially acceptable excuse to stand in a river all day watching the interplay of light and shadow. Stand there with a rod in your hand and you’re taking part in a celebrated and honorable activity. Stand there without a rod and someone will eventually call the cops. 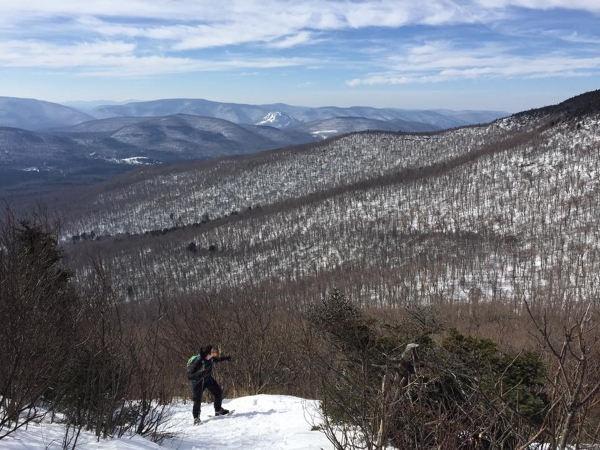 Climbing Blackhead, one of the four “winter peaks” on the Catskill 3500 (Photo by Christian Stadler)

The list is an excuse to get to know a storied and mysterious part of the Hudson Valley. To look out on a summer afternoon, from the saddle between Wittenberg Mountain and Cornell Mountain, to Giant’s Ledge, across the clove and halfway up Panther Mountain. To hike Panther on a golden autumn evening, look back across the clove at Wittenberg and Cornell and realize you’ve climbed those slopes. To come back a few months later at 4 a.m. on New Year’s Day to climb Panther again through a foot of snow in 20-degree air because it’s one of the winter peaks, in time to see the first sunrise of the year crown Wittenberg.

The list is there to get you out the door to where the bears and dogs and rivers and high piles of clouds are.

It’s all worth it because when you finish the list, you can mail it in and get … a patch. I think there’s a sticker, too. It’s possible that there are other, amazing, top-secret rewards that I don’t know about yet because I’m only halfway through. I’m pretty sure it’s more about the bears and the clouds.

When you have your patch and possibly a sticker, you can keep going, because there’s also the Winter 3500 club in which you climb all 35 peaks in the winter, and The Grid, when you create a spreadsheet with 35 rows and 12 columns and climb each peak 12 times, once in each month. That’s 420 hikes. You’ll have adventures.

Take your time with all this, because otherwise you’ll find yourself trying to find ways to get through the list “more efficiently,” which … ugh. I once considered knocking out all four winter peaks the weekend before the first day of spring after an unusually warm winter because there was no snow left.

Then I thought about mountaineer and Patagonia founder Yvon Chouinard, who griped that climbing Everest nowadays, with its base camps and sherpas and tour packages, was becoming too easy. The point of doing something like climbing Everest, he said, was for physical and spiritual gain. Compromise the process, and you’re a jerk when you head out and you’re still a jerk when you get back.

So I waited until the following spring, when there was still several feet of snow. I strapped on snowshoes and headed with my friend Christian to Blackhead Mountain, another winter peak. At one point, while backsliding, I had to jam the spikes of my snowshoes into a rock to keep myself from shooting off the mountain.

After we reached the top, we pushed through to a place where no one had been in weeks. There were no tracks, only untouched powder and melting ice dripping down the branches of the pines and sparkling in the sun while a low wind blew through the trees. We stood for a moment to take it in.

“I don’t go to church anymore,” Christian said, finally. “But twice a year, if I can come across something like this, that’s enough.”