Sophia Rose Antik, the new design studio, antiques-seller and home furnishings shop is rooted in all things Scandinavian, reflecting the matriarchal heritage of its proprietor, Pia Chaudhari (her father’s side is Indian). Not only are the designs and products from that most northerly section of Europe, the philosophy behind them is, too.

“We’re drawing on the beauty and grace of historical aesthetics, the Scandinavian flair for combining form and function, and dramatic synergies between traditional and mo 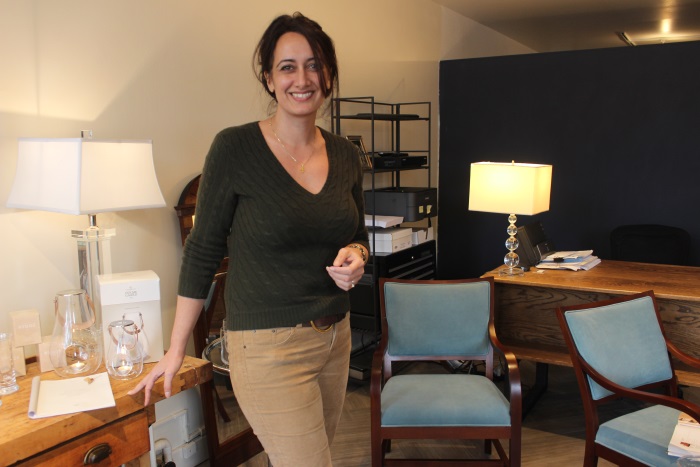 Pia Chaudhari (Photo by A. Rooney)

dern,” a description of the business reads. Indeed, stepping into the shop’s Main Street quarters, one is surrounded by objects from different centuries.

Chaudhari first became acquainted with Cold Spring as a child, on frequent mother/daughter “days out,” traveling from their Westchester home.

“This is my first storefront, but I basically grew up in a store,” Chaudhari relates. “Both my mother and grandmother had them, so it feels very natural. My mother’s mother was Norwegian, but lived in Denmark, where she had a store featuring Nordic folk items. She brought Norwegian art and products to Denmark. My mother’s store, which she ran for 13 years, was in Pleasantville and was called Almue Stuen, which means, more or less, folk room.”

In fact, in a 1978 New York Times story about that store’s opening, Chaudhari’s mother, Karin Chaudhari, touched upon some of the tenets that her daughter speaks of now. “Our surroundings must enrich our lives,” she told the Times. “That means good design, beautiful colors, natural materials and using these things every day, not putting them away for ‘best’ or special occasions. They must be made to last and the designs must not be boring. We want people here to share this.”

The younger Chaudhari says that storekeeping “is in the blood. I’ve wanted my own storefront since I was a little girl.” While there may be a professional lineage at work, Chaudhari first had another career, in theology and psychology. She has a Ph.D. in Psychiatry and Religion from Union Theological Seminary, and still works in that area. Asked how these two, seemingly unconnected, professional strands intersect, Chaudhari replied easily: “The importance of beauty is something they both have in common.”

Living in Manhattan, Chaudhari was “feeling at a crossroads on how to grow my design business when I visited Cold Spring again. I was so struck by the physical beauty and also the vibrancy of the community. I began wondering what it would be like to move there. How would my business fit in? I had just finished up a major project, and I tend to follow my intuition. It wound up becoming both a personal and professional decision. I moved up in mid-September; this place is so special.”

Chaudhari’s business has several components. Primarily, there is interior decorating, with many clients in Westchester, as well as in the city. She’s also been selling antiques online for a number of years. To these, in her store, Chaudhari has added a selection of (largely) Scandinavian goods. These include high-end items like the designer mohair blankets and scarves handwoven in Finland, to more moderately priced items like Danish glassware. “I get to bring over everything I miss. And I can natter on for hours about the shape of the glasses,” she says, animatedly. 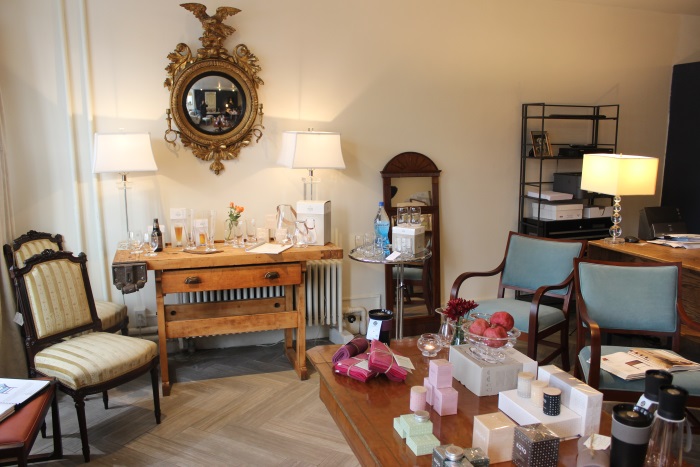 Talking comes naturally to Chaudhari — it’s the line of communication which must be open between designer and clients. And the clients vary in their needs. “Some come in knowing just they want, and others are open to exploration. Some people just need someone else to confirm their choices. Others just don’t have the time to compare and decide. Some have very distinct ideas about a look and it’s a challenge to create that look within the space they are living in. It becomes a combination of what they love and my expertise. I love working with the architecture of the site, what’s inherent, weaving the historic and modern so it resonates inside and out,” Chaudhari explains. She does mostly residential work, plus a bit of commercial, particularly in hospitality.

In her sideline, most of the antiques Chaudhari sells are Scandinavian. She acknowledges that when they hear the phrase “Scandinavian furniture,” most people jump immediately to notions of Danish modern design. However, she notes that this impression comes in part from Danish designers’ radical re-interpretations of previous styles. Earlier Swedish design, some of which she features, was “very, very different. The Gustavian style was influenced by the French Louis XVI style, but became airier and more muted under the Nordic touch,” she says.

As far as Chaudhari is aware, she is now Cold Spring’s only Main Street interior designer. For now, Sophia Rose Antik is open Friday through Monday, or by appointment. (The store’s first name is Chaudhari’s middle name; Rose symbolizes beauty over centuries; and Antik is the Danish word for antiques.) Many people, locals and tourists, some of the latter disembarking from the weekend cruise sails, have stopped by, and Chaudhari has enjoyed the social interaction which results from having a storefront. “I’m specifically open on Fridays and Mondays because I know often local people don’t like to come down to Main on the weekends, and I hope that they’ll come by, have a cup of coffee. I love hearing people’s stories. I just had a man come by who had done all this research on spinners and weavers in Iceland because he is writing a novel focusing on this as women-driven commerce!” 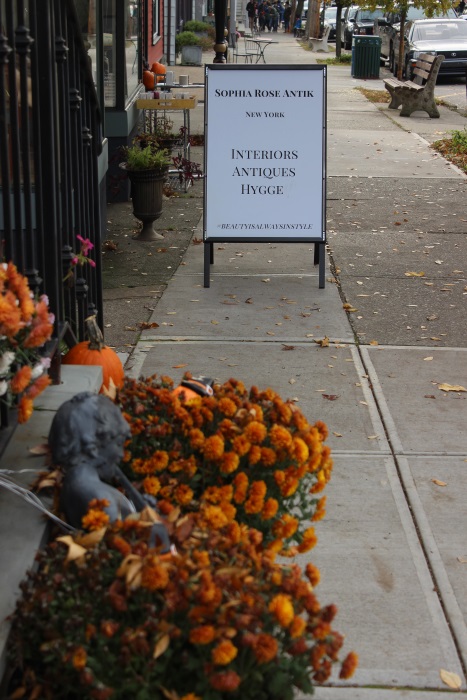 One question which comes up frequently when people drop in involves hygge. That Danish word, employed in recent years nationwide by home-and-design magazine editors, is featured on the shop’s signage, a reflection of increasing  familiarity with what it means. Or at least people think they know what it means. Chaudhari loves defining it more specifically.

“It’s very hard to translate, but it’s primarily an experience. In addition to pleasure and coziness, it has to do with a certain value system. You can’t have hygge without equality. It’s not a grandiose concept; it’s very accessible. It’s something all Danes share. Every Dane knows what it is, which is care for self and others and affirming the essential goodness of life. It could be spontaneously going to the beach and watching the sunset, or a beautiful speech at a wedding. It’s there in every country, but the Danes lift it up and acknowledge it.”