In March 1941, the Beacon City Council met to remedy the problem of streets in Beacon that dated to before 1913, when the city was formed from the villages of Matteawan and Fishkill Landing. As a result of the images, there was Washington Avenue and Washington Street; Tompkins Place and Tompkins Avenue; Center Street and West Center Street; and Park Avenue and Park Street.

In the 28 years since Beacon had become a city, there had been seven mayors, three of whom had died. In a “Eureka!” moment, council members decided to name those conflicted streets after the dead mayors. Thus, Tompkins Place became Beskin Place after Beacon’s second mayor, Samuel Beskin. Washington Street became Russell Avenue after Alfred Russell, the mayor from 1930 to 1933.

However, plans to rename Center Street to Frost Street to honor James Frost, the first mayor, ran into a roadblock. Many residents on that street protested the change and the council took note, so the late Mayor Frost was stiffed.

After running through the dead mayors, the council renamed Park Street (then located near upper Liberty Street) to Wilson Street after Pvt. William Wilson, the first soldier from Beacon to die in World War I.

One of my favorite authors is Mark Twain and for years I have been searching through old local newspapers hoping to find some clue that he once visited in Beacon.

The closest I could come was the time the creator of Huckleberry Finn and Tom Sawyer passed through Matteawan as a passenger on the New England Railroad — riding on the tracks just 100 feet or so from The Roundhouse — as he journeyed from his home in Hartford to West Point. I would hope the views of our Main Street and Fishkill Creek left a pleasing impression as he gazed out the window.

The first major undertaking in Beacon’s Urban Renewal program was the Forrestal Heights Housing Project. In 1966, a handful of handsome old homes on Wolcott Avenue between South Avenue and Dinan Street were seized and razed, among them a dilapidated, bulging, made-over apartment house once known as Cedar Lawn. 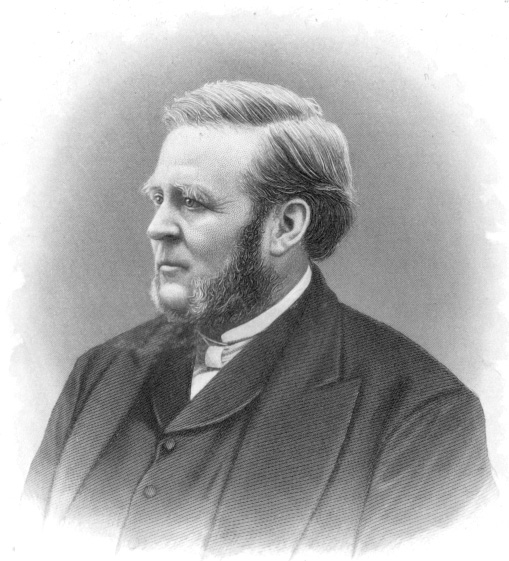 Cedar Lawn had belonged to Dr. Egbert Guernsey (1823-1903), a journalist, philanthropist, founder of two hospitals, and New York’s most noted doctor of homeopathy. For more than 50 years, Dr. Guernsey came to his Georgian mansion summer home with its accompanying 12 acres in Fishkill Landing to take a break from his busy Fifth Avenue practice. At some 400 pounds, the hefty doctor was hard to miss as he rode his carriage about the streets of Fishkill Landing, off to assist those in need regardless of their station in life.

This quality of mercy was not lost on one his literary friends. Bret Harte was best known for his fictional stories of California’s Gold Rush miners, but in his short story, “The Man Whose Yoke Was Not Easy,” he based the protagonist on Guernsey, describing his fictional doctor as a “man who, through his long contact with suffering, had acquired universal tenderness and breadth of  kindly philosophy; a man who devoted the greater part of his life to the alleviation of sorrow and suffering, whose face was as kindly, whose touch was as gentle in the wards of great hospitals as it was beside the laced curtains of the dying Narcissa.” 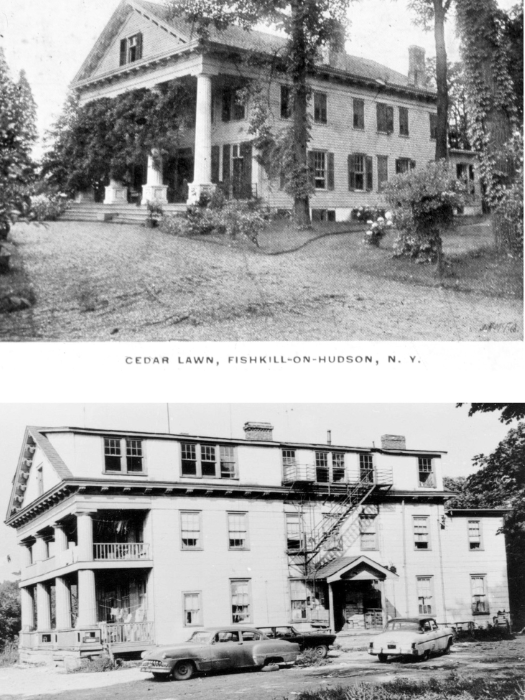 Cedar Lawn (above), which belonged to Dr. Egbert Guernsey, was turned into apartments (below) before being torn down in 1966. (BHS)

Cedar Lawn was located about where the Forrestal Heights high-rise is today. By the 1950s and 1960s, a landlord had chopped the mansion into apartments.