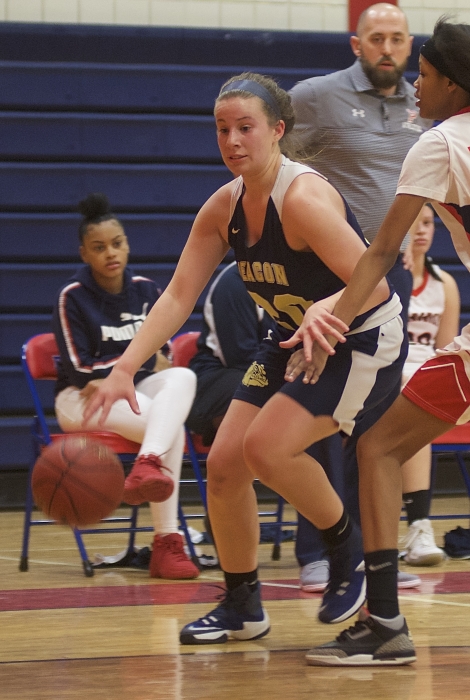 The Beacon High School girls’ basketball team took a trip to Peekskill on Tuesday (Feb. 5) and came home with a hard-fought 61-58 victory over the Red Devils.

The win was the Bulldogs’ third of the season, against 14 losses, including a defeat earlier in the season to Peekskill at home. (The girls also have victories over Roosevelt and Haldane.)

“They beat us by double digits [52-39] the last time we faced them, but today the girls did a good job executing our game plan,” said Coach Christina Dahl.

The Bulldogs led 32-28 at halftime. Grace Affeldt finished with 15 points on five 3-pointers. Dior Gillins added 12 and Lejdina Gecaj had 11.

“Grace played the entire game for us,” Dahl said. “She’s our go-to scorer. Dior was in a little foul trouble, and the team did a good job managing the game when she was on the bench. Sarah Evans gave us nine rebounds and five blocks.”

Beacon fell to Walter Panas, 32-26, on Thursday (Feb. 7) and will finish its regular season with trips to Hendrick Hudson on Feb. 12 and Poughkeepsie on Feb. 13.