Photographer inspired by what lies beyond

With a busy career in commercial photography, much of it in the fashion and beauty products industry, Evan D’Arpino found little time to focus on his artistic work.

It took a 2012 move to Beacon, his wife Dareshanie’s hometown, to find the time and the space, the latter at Newburgh’s Atlas Studio. 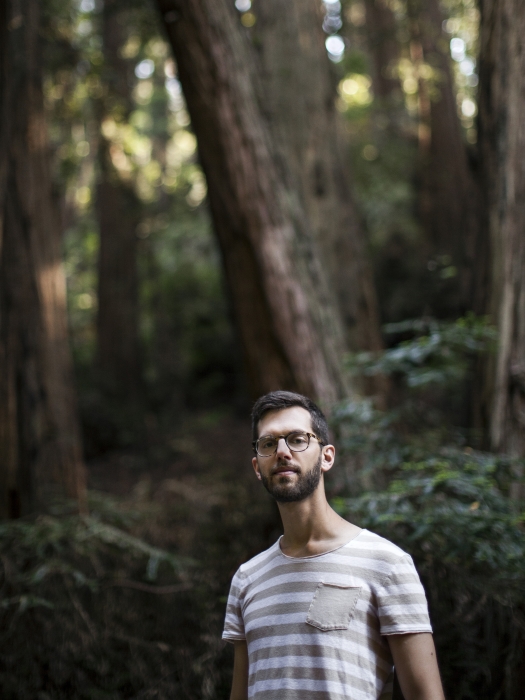 “I still shoot commercial, but over the last couple of years I’ve been doing more of my own work,” he says. “The idea to embark on a creative personal project came after feeling a bit discouraged. We spent a night talking with a friend about creative projects we wanted to pursue. It was a catalyst.”

Many of the resulting images, classified into four series — three of which explore aspects of the origins of life, scientific discovery, myth and fate — will be shown in a solo exhibit, Principia: Origins and Destinies. It opens at Atlas at 11 Spring St. on Saturday, June 15, with a reception from 5 to 8 p.m. and runs through July 13.

The first series D’Arpino worked on was Ekphrasis, which is based on The Iliad and The Odyssey.

“I read different translations but kept stalling, thinking I didn’t have anything to offer,” he recalls. “It was when I listened to an audio-book version that I heard how beautiful the language is, with interacting symbols. I realized I could take these symbols, put them together and create. The components are unrelated visually but they embody the words, the bigger points of the piece. These create their own narrative but still connect with the horrors of war, fate versus free will, and comradeship and love.”

There is no accompanying text. “I debated whether to provide quotes for context and decided that it weighs it down,” he says. “I want people to take whatever they want from it, otherwise it’s like seeing the CliffsNotes before reading the book.” 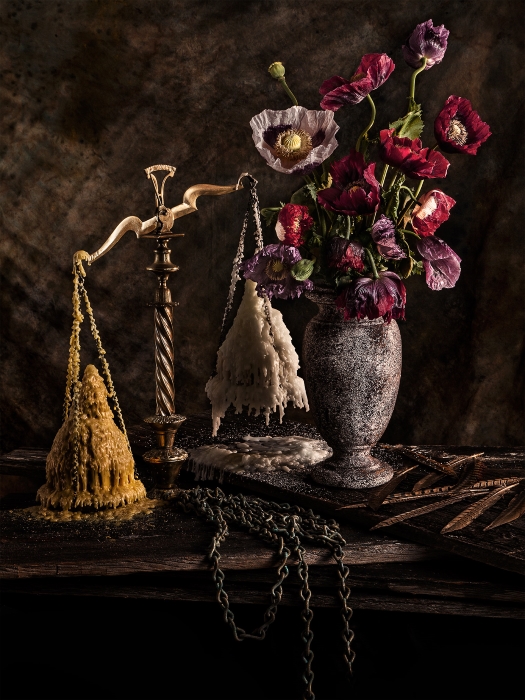 “Two Fates of Death,” from Ekphrasis

Making the images took a long time. “I started by creating a list of symbols and then a prop list. Then I went online and into stores, looking for antiques.” In some works, such as “Two Faces of Death,” he used beeswax to “symbolize God’s intervention and steering the fates of the mortals.” Pouring one teaspoon at a time, “it’s a slow process of pouring, dripping, rubbing,” he says. “The last step is lighting. That’s the center of it, the most important aspect.”

Brutalist Acropolis contains photographs of Empire State Plaza in Albany, the nearly 100-acre complex constructed between 1959 and 1978 that displaced 7,000 residents. “It holds a sentimental place in my heart, because my grandfather’s marble company installed much of the façade,” says D’Arpino. “But more importantly, it serves as a reminder of America’s history of white flight and uprooting minority families.”

Abiogenesis was more streamlined. It was commissioned by a fine mineral dealer, using the dealer’s materials. “It’s about the moment when non-living matter becomes living,” D’Arpino says. “It started when I discovered the existence of giant viruses, which have cellular DNA. Something living evolves into a virus, which is technically not living. The idea that life is binary is a dated way to look at it. Crystals have some of these qualities — they grow, respond to environments and reach an equilibrium. I’m not saying crystals are alive, but I’m displaying them in ecosystems: in bell jars, using fog to imply an atmosphere, to make them seem as lifelike as possible.” 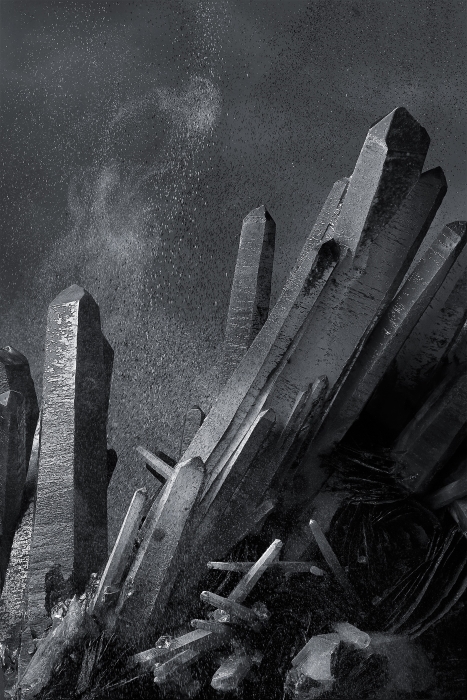 Nucleation “allows organic design to be appreciated on its own merits, while bringing the strong graphic forms and geometry of the minerals to the forefront,” the artist explains. “The lack of spatial context causes the specimens to appear as though they were designed with intent and purpose.”

After hearing his descriptions of Abiogenesis and Nucleation, it’s no surprise to learn that D’Arpino has a background in science. He grew up in Voorheesville, New York, and attended SUNY Albany, where he majored in geology. “I like processes and have always been drawn to science, so it resonated with me,” he recalls. “But I didn’t want to work for an oil company, or in hazard assessment.”

After taking a year off, he enrolled at the Hallmark Institute of Photography in Massachusetts and then moved to New York City, where “the learning really started,” he recalls. “The competition is insane.” Over the next several years, he says, he figured out “what I wanted my visual to be, what I wanted to emulate, testing things, building a portfolio. I did a little bit of personal work mixed in with the professional, then exclusively commercial work.”

Now the scales are tipping again. “I’m always drawn to things that exist beyond the scale that we, as a species, can perceive,” he explains. “Science has informed my perspective, exploring things that we can’t ever find the answers to. I have my own beliefs, but they’re kept out of the work. I have an interest in discovering and learning.”