I’m a pretty optimistic person. As a business owner, I have to keep on the sunny side of life. In fact, I’m listening to a song called “Keep on the Sunny Side” right now from the O Brother, Where Art Thou? soundtrack, a compilation about dying.

My job at Tin Shingle, my business about teaching businesses how to get the word out about their business, is to empower people to move forward, and go for big dreams they don’t think are possible. I have a webinar series called “Give Yourself Permission” where I list a string of ideas together of what people should give themselves permission to do, like throwing themselves a ribbon-cutting party or pitching a big magazine a story.

That’s why I surprise myself — again and again — when I instinctively say to my children: “No, that can’t happen.” My daughter is getting taller, and she outgrew her from-the-scrap-yard bike that came out of our neighbor’s truck, headed for the smelter. 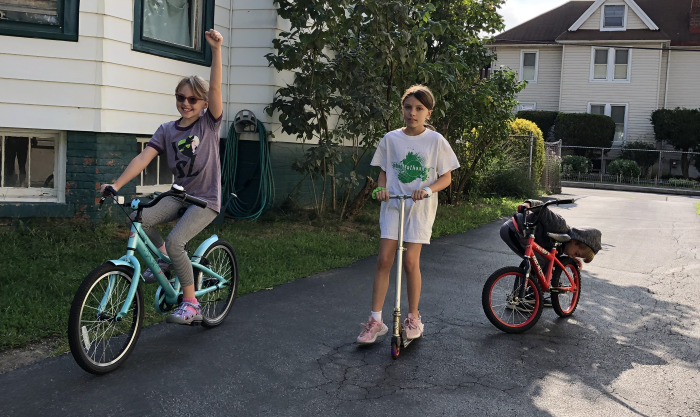 Heading out to get a new bike. (Photo by K. Martin)

For her birthday, I said yes to a brand-new bike. At her request, we headed off to People’s Bicycle in Beacon. As she peddled on her too-small bike, she shouted to me: “Maybe he will buy my old bike!”

“No way,” I said. “He sells good bikes. That bike came from the trash! This isn’t a car dealership, where they buy trade-ins!”

Nevertheless, she persisted. I pushed back a few times (why?) and then gave up. Sure, let her try. We’ll be embarrassed (of what?!), and we’ll move on.

We made it to the shop. Immediately she asked the shop owner, Tim Schopen, if he’d buy her bike. He took one look at it, and said: “Yes! $50.”

What? I was stunned.

“Of course we buy bikes! I sell used bikes, and I happen to also carry that brand,” he said. He directed me to the wall of shiny new children’s bikes. I looked back at the little blue dirt bike that had been perfect for my daughter to learn on — more perfect than the Barbie bike we bought her a few birthdays ago that never pedaled smoothly and was always an awkward fit.

We bought the new bike (I tricked my daughter into thinking that I was thinking about it while arranging with Tim for a birthday delivery). He took $50 off the purchase and encouraged us to sell it back to him when she’s ready.

Mental blocks are all-around us. We block ourselves, and others block us. If you get into the habit of spotting the blocks, you can more easily remove them. Let’s call it Block Hunting. Make it a game.

One morning just this week, as I came back from a jog during which I was mentally preparing for three meetings, not to mention drafting this column, the time came for our older two to go to camp, and the youngest to go to day care. Two drop-offs — not hard but requiring different things (e.g., finding shoes/socks, wrestling child into car seat, etc.).

My husband had drop-off duty. Technically, all children were ready (minus the shoes of my youngest, but those usually get thrown into the car and put on at school). As they were about to go, my husband declared: “I can’t take the little one to school because you parked the little car behind the big car. You’ll have to drive him.”

So you see, blocks are just excuses not to do something, for whatever reason. If there is something you want to do, or you think is a great idea, and is too unbelievable for your mind to accept, go for it. And keep going for it. Because sometimes big dreams take months (maybe years) of tiny steps.

Let your children be your guide. Say yes to them, even when it makes no sense and is hardly worth it. The more you practice saying yes, the more you will bust through bigger blocks.