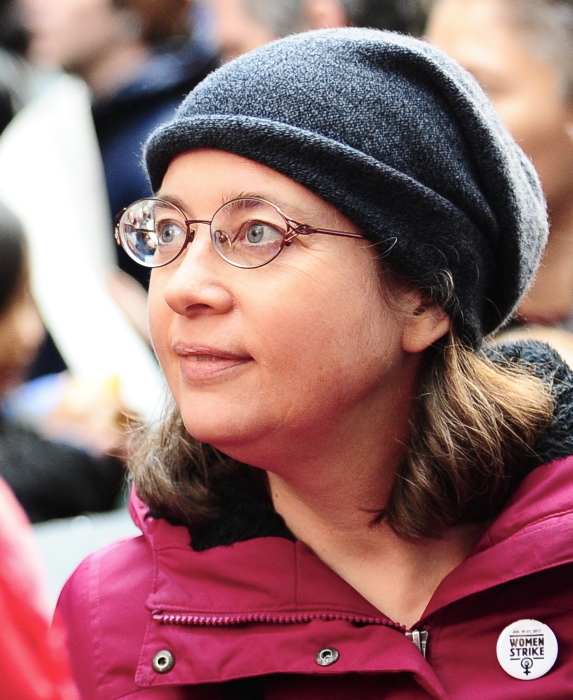 Jenny Brown (Photo by Pete Self)

Jenny Brown is the author of Birth Strike: The Hidden Fight Over Women’s Work. She will discuss it at Binnacle Books in Beacon at 7 p.m. on Friday, Sept. 13.

The title of your book refers to the idea that declining birthrates in the U.S. — which reached an all-time low in 2017 — represent the equivalent of a “strike” by women. How so?

My group, National Women’s Liberation, noticed in our discussion groups that many women said they had one child and stopped because of financial burdens such as insecure health care, very short paid leave, expensive child care and lack of affordable after-school and summer programs. We realized our society is relying on women’s unpaid labor to raise future generations without putting in the resources to make it tenable.

You note that corporations are concerned. Why is that?

Population growth has been the underlying factor for economic growth since the dawn of capitalism. Stagnant growth is a recent trend, and not just here. For instance, Japan’s is usually blamed on low — lower than ours — birthrates. In earlier times, governments wanted more workers, more soldiers. During the Teddy Roosevelt era, they were quite open about it: We need more population to be able to expand and invade. Social Security is a big area of concern, with worries there won’t be enough children earning money to support their parents, so the costs of retirement might end up being borne by employers. It turns out there’s plenty of production and resources to allow a comfortable retirement for all, but it’s concentrated in the top one-tenth of 1 percent of earners, where nearly all income is not taxed for Social Security. That money represents production, yet it is not going into Social Security programs.

So can women gain bargaining power by threatening not to have children?

It’s happened. In France, the low birthrate prompted robust paid leave and child care so people could afford to have children. Sweden’s welfare state, created in the 1930s when there was a panic over birthrates, still provides for families. In the U.S. we’ve been able to win some short, paid leaves, but we haven’t united around the idea. Women blame themselves when we can’t balance family and work. But individuals did not create the problem; it’s part of a system and requires a political solution.

What needs to be done?
Universal health care is what it comes down to. This should be combined with well-paid parental leave and shorter working hours. But it’s also about housing costs and student debt. People sometimes don’t see how their own lives can be affected. If people understood the stakes, they would unite around it.

What have the politicians said?
Sen. Bernie Sanders has cited examples of his constituents in Vermont who tell him they want to have a second child but their work hours, wages and conditions make it impossible. Sen. Elizabeth Warren proposed a big child care program. There’s a hardcore part of the extreme right that believes Western civilization is on the decline because of low birthrates and wants to outlaw abortion for that reason. On the progressive side, it’s clear that the child-production cycle is broken. We need to make this less onerous.