I was walking down Main Street in Beacon one sunny Saturday afternoon. My 2-year-old only takes naps in the stroller now, so we went for a stroll, and I rang up my sister to catch up. My little guy’s feet were without shoes — his choice — and he clung to his bottle while his legs basked in the late summer sun as we headed east toward the mountain, going from M&T Bank to Rite Aid.

A woman was walking in front of us. She turned around to let me know that my son had fallen asleep. “Oh good!” I said in my Saturday stroll cheerful voice. She went on to show concern for his feet. “They are in the sun! They will burn!”

Walking from M&T to Rite Aid will not burn one’s feet. “He’s just fine,” I told her. She persisted: “Surely he has sunscreen on?” I looked straight at her told her, “Yes, he does,” in my deepest, darkest voice. No more cheerfulness. Just ending this conversation.

Thank goodness I’m a third-time mom, because the accusation that I was #momfailing might have rattled my first-time mom self. Nope. Everything is just fine and he’s happy. 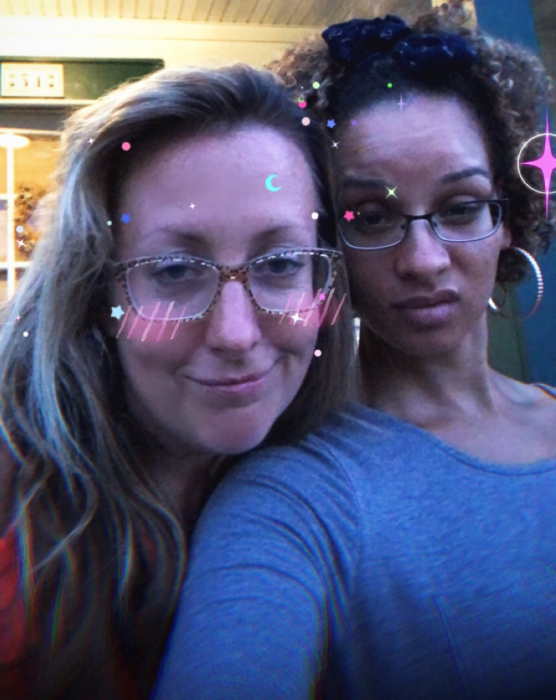 The author, left, shows off her “stink eye with a smile,” while her friend Audrina has a straight-up “take that tone stink eye.” (Photo provided)

Inside of Rite Aid, I got what I needed and went to check out. My toddler was still asleep, and I continued to chat with my sister on the phone (softly) while in line. The woman in front of me said, “Your baby is asleep!” Here we go again. I put my cheerful voice forward. “Yes, isn’t it wonderful?”

She persisted. “Oh!” she said, and gestured. Concerned, I peeked around the stroller. “Is something wrong?” I asked. She said: “You might want to…” What? I didn’t get it.

“His bottle! He might drop it!” His fingers were curled around it. He was asleep, but that bottle wasn’t going anywhere. Plus, it was nested between the corner of the stroller and his leg.

“He’s fine, he loves his bottle,” I said. She persisted. “But he might drop it!”

That’s when I dropped tone. My voice lowered to the place it lives when I mean business. The implication is: “That’s what I said. You heard me.”  As my grandpa used to say: “And I don’t mean ‘maybe.’ ”

I looked the woman squarely in the eye, vocal tone dropped an octave, and I said: “I am not touching that bottle. He is just fine. Thank you.”

She made a gesture of “I’m just trying to help, but you got this,” and we continued with our checkouts.

About this tone. The low voice is a real thing. During my most recent visit to Salon Dae out past Hopewell, I watched as owner Danielle Pitts tried to give Siri a command to set the timer for 25 minutes for my color to set.

Danielle has a velvety voice, dripping in patience and vision. A mother of two boys, she knows how to speak. Yet when talking to Siri, she used a higher-pitched, polite voice. Siri didn’t respond. Danielle got irritated. She dropped her tone and said it again in her normal lower voice. Siri responded immediately.

You know what I’m sayin’? When I drop tone, my hubby doesn’t take it well. The first few times he told me I was acting weird. My children ask me if I’m OK. I need a mental full-court press when I go in public with them, to make sure the tone doesn’t zigzag into craziness.

Just like I love the new shadow root in my hair, with its two-tone blond/brown, I love the dropped tone in my voice. Maybe this came with age (42). Maybe I’m just tired, overwhelmed and dehydrated. Can’t connect words in sentences anymore. I always suspected I was dyslexic, but speaking in broken sentences is a new thing that is only controlled with the dropped tone.

Required listening for this column is the latest Lizzo album. If you listen to Top 40 radio, you’ll know her breakout song as “the Minnesota Vikings song.” It’s actually called “Truth Hurts.” It has a moving beat to inspire you to say what you want, say what you need and speak the truth. If you’re not used to it, you have to practice. It’s not being passive aggressive. It’s being direct.

So speak it, ladies. We got to go low to be heard. Steady and slow.