Governor enacts another round of bills passed by state legislators

Gov. Andrew Cuomo has so far this year enacted 574 bills passed by the state Senate and Assembly, with another 61 waiting for his signature. He has vetoed 46.

■ A state program allows veterans who served in World War II, Korea and Vietnam and who joined the military before graduating from high school to be awarded diplomas. On Nov. 11, Cuomo extended Operation Recognition to include veterans of Operation Desert Storm, Iraq and Afghanistan.

■ Also enacted Nov. 11, this law directs the state Division of Veterans’ Services to create a Discharge Upgrade Advisory Board to review evidence prepared by veterans who want to appeal less than honorable discharges. The board can write an advisory opinion for the veteran to submit with his or her appeal.

On Oct. 29 Cuomo signed legislation to replace phrases such as “husband/wife” in the law that regulates estates, powers and trusts with phrases such as “spouses, husbands or wives” to recognize same-sex marriages. In the procedures for surrogate court, “father and mother” was replaced by “parents.”

On Nov. 5, Cuomo enacted legislation requiring that death certificates in overdose fatalities specify which opioid was involved, if known.

■ On Nov. 6, Cuomo expanded a law that prohibits landlords from collecting rent or evicting a tenant for nonpayment if the property does not have a certificate of occupancy, which indicates the space is legally habitable. Previously, the law applied only in cities with more than 350,000 people; it now includes all cities, including Beacon. The law also prohibits renters from living in an apartment or house that doesn’t have a certificate of occupancy.

■ On Dec. 3, Cuomo signed legislation that makes it a misdemeanor for landlords to create “unsafe, disruptive or uninhabitable conditions” to force a rent-regulated tenant to move, such as shutting off the heat and hot water or scheduling continual construction.

On Nov. 14, Cuomo enacted legislation allowing adoptees to receive a certified copy of their birth certificates when they turn 18. If the adoptee has died, his or her legal representative or descendants will have access.

■ Election boards, such as those in Putnam and Dutchess counties, must create “user-friendly” ballot designs by Aug. 1, 2020. 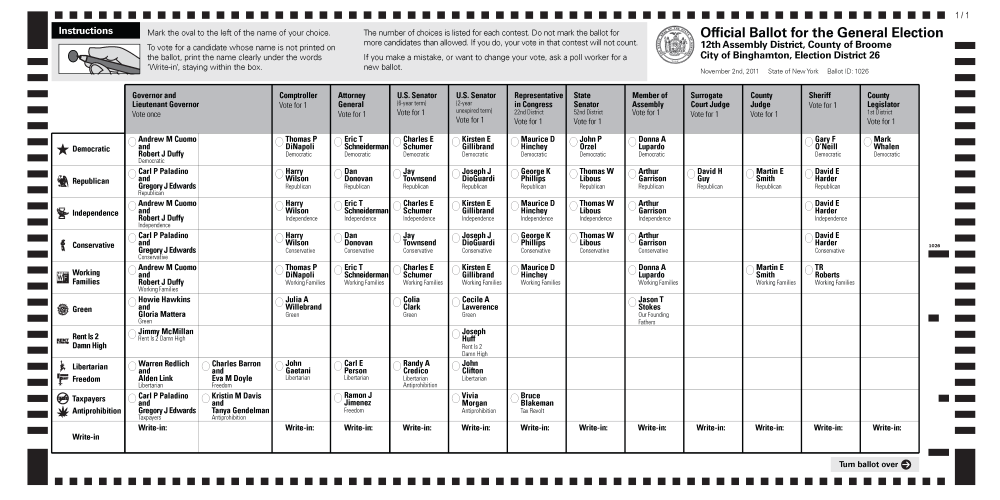 ■ By April 15 of each year, election boards must calculate and post the maximum contribution a person can make to the campaign of a candidate for a county, town, city or village office. The amount changes each year because it is based on the number of registered voters in the election district.

■ Introduced in the Assembly by Galef, this law changes the process that allows people to add a write-in line to a primary ballot, which forces a vote if there is only one endorsed candidate. As part of the process, at least three members of the party must be listed as a Committee to Receive Notices; the new law requires those individuals to acknowledge their appointments. Galef introduced the bill after she received the Women’s Equality Party endorsement in 2016 but was challenged in the primary by an Opportunity to Ballot Petition, and the three members of the party identified as the Committee to Receive Notices each said they had no idea they were on it.

■ A second law introduced by Galef allows a voter to provide an email address when registering to receive information such as polling locations or changes to election laws. It takes effect Nov. 26, 2020.

The federal Affordable Care Act recently required that plans offered in the Health Insurance Marketplace cover contraception (excluding abortions and vasectomies) with no out-of-pocket costs. As a result, “some employers have attempted to prevent employees from accessing this benefit because it conflicts with their personal beliefs,” and more than 100 lawsuits have been filed, according to the governor’s office. On Nov. 8, Cuomo signed legislation that requires employers to allow workers to use the benefits, although health plans sponsored by religious employers such as churches or religious hospitals and colleges are exempt.

This law, signed by the governor on Dec. 2, requires telemarketers to inform customers that their number can be added to the seller’s do-not-call list. It also forbids telemarketers from sharing an individual’s information without written permission. The law takes effect March 1.

This law, enacted by Cuomo on Nov. 25, prohibits credit-reporting agencies from using a person’s social media network when computing his or her credit score, which is used by lenders to determine whether to approve loans. It follows reports that the agencies have considered using the scores of the people in a consumer’s social network as a variable. “It is obvious that individuals in low-income communities will have a social network of similar individuals based on geography only,” lawmakers noted.

To qualify for public assistance, a person cannot have assets of more than $2,000. This law, signed by Cuomo on Oct. 3, exempts the balances of any Section 529 tuition savings funds from the assets used to determine eligibility.