A performance highlights the work of blind photographers

The Seeing with Photography Collective, which has been around for 30 years and meets each week in Manhattan, is unusual. The members are blind.

Its work was scheduled to be part of a multimedia performance, Blind Visionaries, on Saturday, March 21, at the Philipstown Depot Theatre, accompanied by music by the Daniel Kelly Trio, before the production was canceled this week because of concerns about the coronarivus.

During the show, which was part of the theater’s ongoing Flipside series, images are be projected on a screen while the photographers are heard speaking about living with blindness. In addition, audience members make a photo with members of the collective. 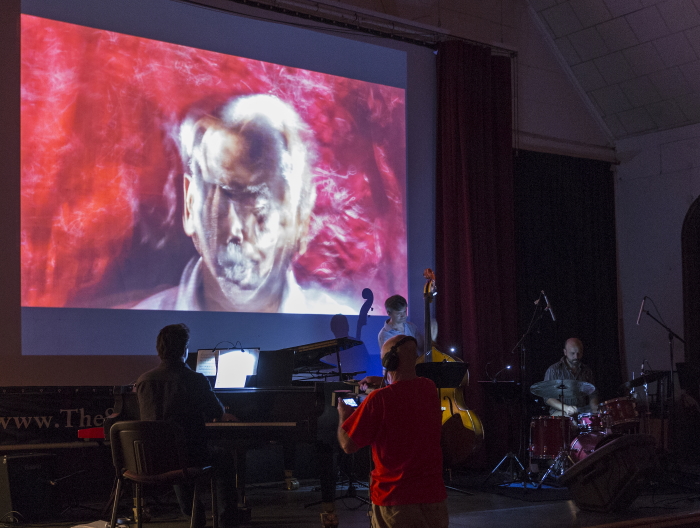 The Daniel Kelly Trio performs while photos by members of the Seeing with Photography Collective are shown behind them. (Photo provided)

That’s make, not take. The collaboration involves a technique called “light painting,” in which a blind or visually impaired photographer from the collective describes an idea for an image. For example, he or she might say: “I want to take a picture of a person with three heads, and clouds all-around.”

A sighted helper works with a camera on a tripod to help focus and frame the shot but “there is “nothing creative in the actual camera work,” says Kelly, who lives in Cold Spring and helped organize the show. “What’s creative is how it’s conceptualized. Several people make the photo together.” 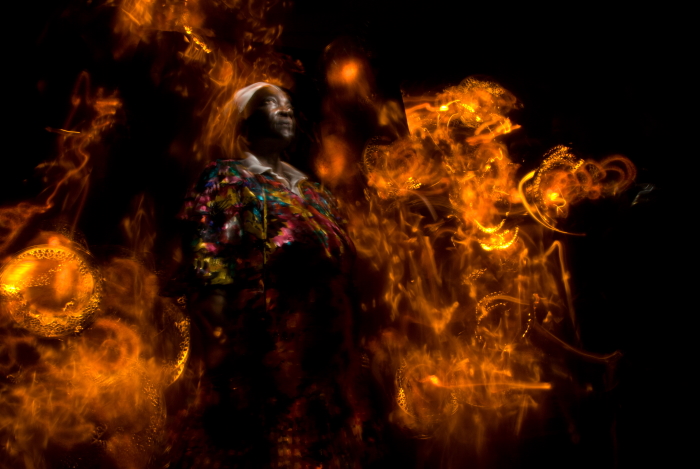 “Woman in Fire, Gazing Upward,” by a member of the collective

With the lights off and the camera shutter open, “people with small flashlights light parts of it, creating multiple exposures,” he explains. “They might use cotton for clouds. It’s surreal portraiture. It’s all about controlling the light.”

Kelly says many members of the collective came to photography after their loss of sight, and that it has given them a way to express what they visualize. After a photo has been taken, Mark Andress, who directs the group, will describe it to its creator. “Most have seen before but have an illness that’s causing them to lose their vision,” Kelly explains. “They know what things look like. This is their photographic imagination.”

Still, the images may conjure up mysteries unknown to the sighted, Kelly says, because they reflect the internal life of those who once were able to see. One member of the collective expressed it in this way: “When I go to sleep, it becomes just like life again. I hear things, I smell things in my dream.”

Kelly says he discovered the collective’s work about 15 years ago. “I was playing a gig in Manhattan, and a friend came,” he recalls. “He’s one of the sighted people involved. He said, ‘I feel like your music reminds me of those photos,’ and he opened his laptop to show me. I felt like the photos created their own world.

“I started going to the classes. It was so rewarding. For instance, I created a photograph with a man named Benjamin Paige. A year later, I returned to the class again and Benjamin said to me ‘I remember you — I recognize your voice.’ Then he described the photo we made together the year before.”

Kelly notes that “none of the participants call themselves a photographer or an artist. They’re not touting themselves as a product; this is a process. It gives them a link to the world of sight, creating a visual that excites people who see them. Equally important, it gives them friendship.”

The photos are underscored with Kelly’s music, which “matches the stories,” he says. “The combination of film, photography and music hopefully amplifies and conveys the experience. There’s something special about being together in a darkened theater, hearing someone’s experience.”