Board discusses how to fight non-native plants

At its May 18 meeting, held via Zoom, the Nelsonville Village Board unanimously approved a plan to eradicate invasive species such as garlic mustard, barberry and knotweed from the Nelsonville Woods & Nature Preserve.

Submitted by resident Heidi Wendel, the plan outlines a three-year effort by volunteers to replace invasive plants with native varieties. It recommends proceeding gradually to avoid creating bald spots, and to avoid herbicides. 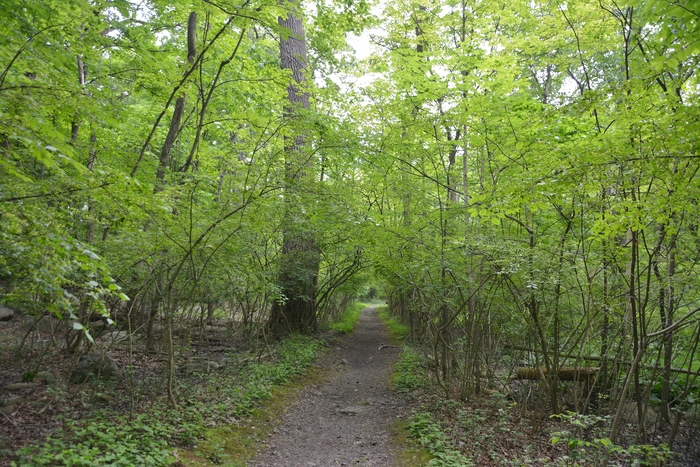 The Nelsonville Woods have long been a favorite dumping ground for lawn and garden clippings. (Photo by L.S. Armstrong)

Under the plan, invasives would be replaced by plants such as milkweed, ferns and sedges, as well as birch and other trees. It anticipates that local gardening clubs and retailers would donate seeds and seedlings, and that other plants could be purchased for modest amounts.

According to Trustee Dove Pedlosky, the New York-New Jersey Trail Conference has offered free expertise and training for a day of eradication efforts by Scout troops, residents and other volunteers.

On a related note, the board agreed to explore a lawn and garden debris/cuttings pickup similar to the village’s fall leaf pickup and Christmas tree pickup. Trustee Lisa Mechaley said that some residents dump lawn and garden trimmings into the Nelsonville Woods, which spreads invasive species.

“For years and years I was guilty of it, along with everybody else,” admitted Mayor Mike Bowman.

Village Clerk Mindy Jesek said in April the increase reflects the need for ongoing engineering expertise on such matters as the pending cell tower installation and exploration of sewer system options or similar public works projects.

Revenue sources in the budget include $284,393 in property taxes (the same as last year) and $49,315 taken from savings, compared to $1,635 last year. The village also expects to receive $30,000 in aid from the state’s Consolidated Local Street & Highway Improvement Program.

After revising successive drafts over several weeks, the Village Board approved the budget on April 29.