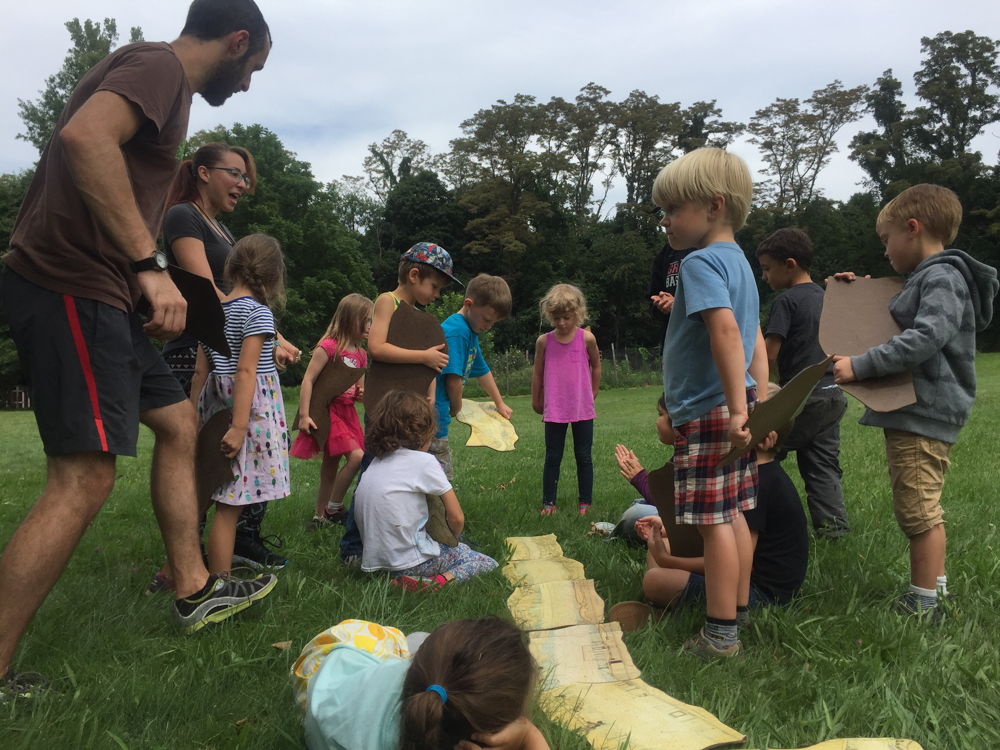 Campers at Camp @ The Camp in 2018 pieced together a puzzle that depicted the Hudson River. (Photo by Ilana Friedman)

Despite Gov. Andrew Cuomo’s announcement this week that summer day camps may open starting June 29, Beacon’s popular Camp @ the Camp has been canceled for 2020 because of the restrictions required to slow the COVID-19 pandemic.

Mark Price, the director of the city’s Recreation Department, described a “hand-wringing, staying-up-late-at-night” process as recreation and city staff wrestled with trying to keep the “magic” of summer camp intact while keeping hundreds of employees and participants safe.

Cuomo said on Tuesday (June 2) that day camps would be allowed to open as COVID-19 infections and deaths continue to decline. Recreational facilities, including camps, fall under Phase 4 of the state’s reopening plan. No decision has been made on sleepaway camps, Cuomo said. The state also did not immediately provide guidelines for day camps.

Beacon announced the Camp @ the Camp cancellation the same day, and said it would refund any payments.

Other camps in the area have also announced the cancellation of their 2020 sessions, including the Philipstown Recreation Department (except for its two theater camps, which will be held online), Hudson Valley Shakespeare, Army Sports, the Storm King Art Center and Surprise Lake Camp in Philipstown.

Other camps are offering alternative programs. The 4th Wall Theatre Camp in Wappingers Falls, Ballet Arts Studio in Beacon and the Manitou School in Philipstown said they would offer virtual sessions, and the Garrison Art Center is planning Summer Arts in a Box, weekly packages that will each contain directions and materials for five projects.

All Sport’s Camp Fit in Fishkill and Common Ground Farm in Wappingers Falls said they are awaiting further guidance from the Dutchess County health department before deciding what to do, while Kid’s Place in Fishkill said it would begin its summer camp on June 15 but limit groups to 10 children and one instructor.

In Beacon, city officials also said the Beacon Pool will not open this summer, and that South Avenue Park Days, tennis clinics and basketball leagues and multisport workshops were also canceled. The city’s parks, playgrounds, and basketball and tennis courts will be open.

Camp @ the Camp launched in 2017, along with the Park Days program, and quickly became one of the city’s most popular institutions. The camp ran five weeklong sessions each of the last three summers at University Settlement, the 100-acre former residential camp site on Route 9D.

Price said city officials two weeks ago received an eight-page document with COVID-related camp guidelines from Dutchess County. However, “at no point did anyone say they were going to let us open,” he said.

The city could submit an application to the Dutchess health department to operate its summer programs but the guidelines were so strict that Price said he began to think, “I don’t know how we’re going to do this.”

According to the guidelines, camps in Dutchess County would have had to modify or eliminate any activities that could not be done while practicing social distancing. Dining would have to be staggered; the “buddy” system would have to be modified to eliminate touch. Camp staff and participants could have been required to wear masks, and facilities would have to be cleaned at least once a day.

The city considered trying to operate within those guidelines, “but what if we did that, only to have kids get sick and staff get sick and then have to cancel it anyway?” Price said. “Do we want to be known as that camp? It came down to, let’s take our lumps for being safe and not our lumps for getting people sick.”

“The one department that has been the most impacted [by COVID-19] has been the Recreation Department, because of its interaction with the community,” Ruggiero said Thursday.