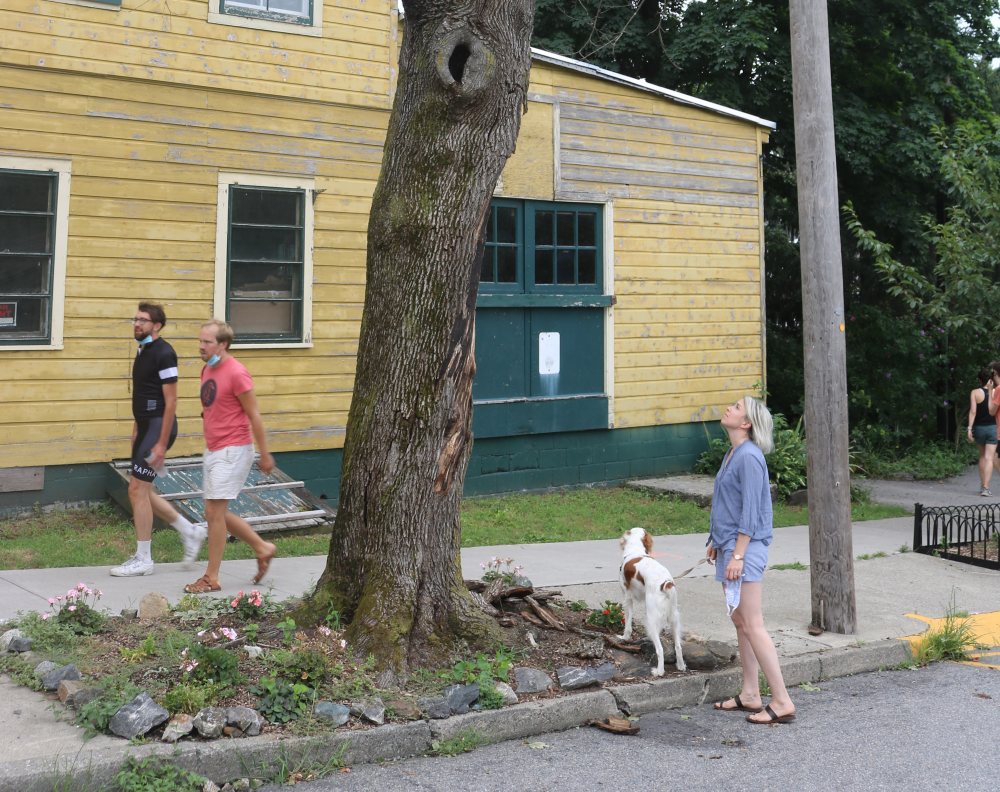 Jennifer Zwarich at the tree on Main Street that is slated to become an artistic canvas. (Photo by M. Turton)

“I think that I shall never see / A sculpture as lovely as this dead tree.”

The Tree Advisory Board of the Village of Cold Spring may be hoping residents and visitors paraphrase Joyce Kilmer’s poem if their creative aspirations for a large dead tree near the pedestrian tunnel work out as planned.

Jennifer Zwarich, who chairs the board, received approval from the village on Aug. 5 to seek proposals from artists with a vision for transforming the doomed Norway Maple.

“We’ve been watching this tree for a long time,” she said. “It didn’t make it through last winter.”

Zwarich said if the tree were removed, the advisory board wouldn’t have the funds to excavate the extensive root ball. So, the five-member volunteer panel brainstormed alternatives.

“We thought we could do something uplifting,” Zwarich said. “Then came the idea of making this already dead tree into at least a temporary piece of art in a very prominent, visible spot.”

Ten to 12 feet of the tree, which has a diameter of about 30 inches, will be kept intact as the foundation for whatever art project is chosen. (Email [email protected] for more information.)

“It’s carte blanche for someone with a creative idea,” Zwarich said. “I envision it as being community-centered. Sculpture would be the coolest, but it could also be painted.”

The advisory board intends to advertise the project soon with a goal of seeing the project underway this fall.

Zwarich hopes it will get the community involved in a conversation about the advisory board’s other work. It received a $50,000 urban forestry grant from the state Department of Environmental Conservation last year. Phase 1 helped fund metal tree guards and pervious pavers along Main Street, while Phase 2 will include extensive pruning of village-owned trees.

“We have a large, aging tree population that has never been maintained well,” Zwarich said. Nearly a dozen trees will be removed as part of the program.

“We’ve been planting trees in those areas to try and make up for it,” she said.

Merandy thanked Wunner, whose services he said “got us through some tough times” and the Butterfield redevelopment project.

The mayor said the board decided it needed “someone that can respond a little more quickly” and work directly with Village Clerk Jeff Vidakovich. The mayor said he wanted to hire Mountain in October but her contract in Mamaroneck prevented her from working elsewhere. Her situation is more flexible now, he said. Merandy met with Mountain on Aug. 2 and the board interviewed her in executive session before the Aug. 5 meeting. Merandy said there will be a period of overlap while Wunner completes current permit applications and Mountain becomes familiar with Cold Spring’s needs.

■ The village will use the state bidding system to purchase a new garbage truck. Its procurement policy does not allow it to seek bids on its own for equipment purchases of more than $20,000. The cost of the truck has been estimated to be much as $134,000.

■ Trustee Fran Murphy said the village is still waiting for information from its insurance company regarding a proposed plan to have volunteers from the Cold Spring Chamber of Commerce be partially responsible for disinfecting the public restrooms alongside the Chamber’s Main Street visitor booth on weekends. Facilities there have been closed since the outbreak of COVID-19. The Chamber must also submit its final proposal to the board.

■ Murphy expressed concern over toys being moved from Tots Park on High Street into the adjacent McConville Park. Tots Park remains closed due to the pandemic. Merandy said people have been dropping off plastic toys at the park in increasing numbers in recent weeks. “It makes no sense to have children playing outside Tots Park if they can’t play inside it,” he said. He added that “there’s no way we can disinfect those toys.” Merandy said he will seek input from parents.

■ Merandy and Kathleen Foley, who is running unopposed for a seat on the Village Board, engaged in a protracted exchange over the role of the Historic District Review Board, of which Foley is vice chair. Foley had provided the HDRB’s monthly report, which stated that its members discussed the Village Board’s “insistence” that the HDRB be prohibited from attending inspections of building interiors, because its mandate only deals with exteriors. “If an engineer decides [a building] should be demolished, why should the HDRB need to go inside?” Merandy asked. Foley said interior inspections sometimes provide information related to the historical accuracy of the exterior. She cited the example of 126 Main St., formerly Carolyn’s Flowers, where an interior inspection before its demolition revealed a parapet that was then included in the design of the new building.

■ Village Accountant Michelle Ascolillo reported that the COVID-19 shutdown has so far led to a loss of about $40,300 in village revenue, more than half of which is fee income usually collected from Seastreak when it docks its cruise ships at the waterfront in the fall. Those trips have been canceled for this year.

■ The Cold Spring Police Department responded to 59 calls for service in July. Officers issued 56 parking and three traffic tickets. No arrests were made.

■ Merandy said he and Philipstown Supervisor Richard Shea are speaking with the state parks agency about the role of local fire companies in rescuing lost and injured hikers at Breakneck Ridge and other trails. Merandy said the number of rescues has gotten “out of hand.”