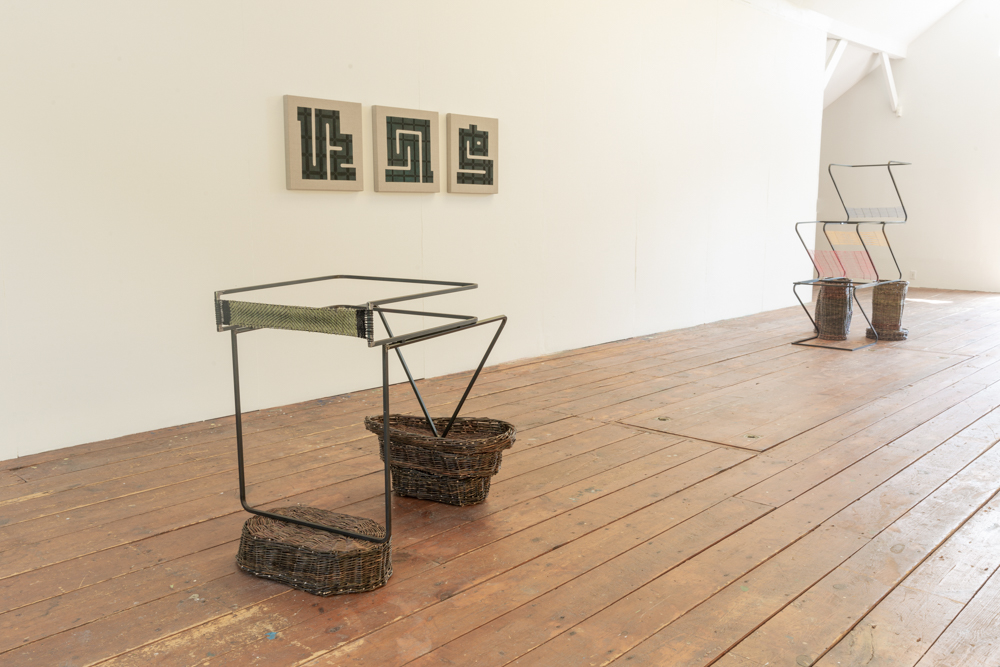 Sculptures by Laura Kaufman on display at the Al Held Foundation are made from steel, willow sticks and weaving fibers including wool, cotton, paper twine and ramie. On the wall are embroidered glyphs by Kaufman made from Japanese watercolors, rayon and rabbit-skin glue on stretched linen. (Photos by Jake Smisloff)

When the COVID-19 shutdown began, Laura Kaufman moved her studio into her Cold Spring living room, which she shares with her husband, an artist who teaches digital media at Marist, their young son and a dog.

“It got crazy — comical, really,” she recalls, with the dog sleeping under her sculptures-in-progress.

Kaufman was preparing for Tension Bridge, a solo exhibition of her work that opens on Aug. 30 at the Al Held Foundation in Boiceville and on Aug. 29 and 30 will be included in the Upstate Art Weekend. The event includes 23 arts organizations between Garrison and Hudson, including Magazzino Italian Art in Philipstown; Manitoga and The Ice House in Garrison; Mother Gallery, Dia:Beacon and Parts & Labor in Beacon; and the Storm King Art Center.

The exhibit features Kaufman’s most recent sculptural work, which melds traditional basket weaving with steel. These types of novel combinations are familiar to Kaufman, whose interests include linguistics, science, materials and the communion of teacher and student in passing things down and around.

“We are in this bridging-year between our pasts and our future — we all feel the turmoil, the sorrow,” she says of the pandemic. “Weaving is a lot about controlling tension, and as we all went about our days trying to adapt to this blanket of sorrow, these steel forms are the bridge.”

Her exhibit in Boiceville was organized following a visit in January to her Cold Spring studio by Alyson Baker and Candice Madey, the founders of the River Valley Arts Collective. 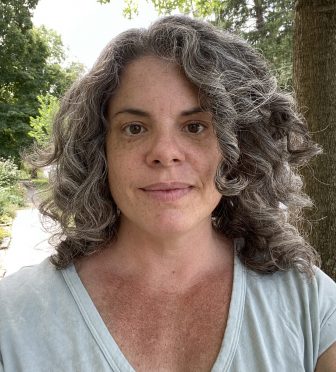 “I had been taking some time away from the studio to learn how to basket weave,” Kaufman recalls. “I did a lot of big projects in 2019, and wanted to refill my studio creativity. So, I spent the fall learning from different weavers. Alyson and Candice have started this new project, curating at different locations within the ecosystem of the Hudson Valley, with artists who are working with fiber, clay and wood, expanding the artist and artisan bridge.”

Before the visit, Kaufman set up some of her work “made from large, chunky bits of felt. I also set up the baskets, though I hadn’t really learned to express myself with them. I thought of them as armature, an engineering that holds up the sculpture, propping things up.”

Baker and Madey asked if she was interested in developing work using the baskets.

“That’s the way curators work — they’re studying the previous work, hearing how an artist talks about their work in the studio and devising something for the artist to step into, without knowing what it might be,” Kaufman says.

“With the weaving, I was steeped in learning techniques in which there are specific ways to do things, whereas in sculpture the training is to devise your own way,” she says. “By treating the baskets as forms, instead of like ‘a basket,’ it made for a small shift. It dawned on me that the baskets could become the engineering, the armature, I could make piles and stacks, much like Greek temples with their plinths and pedestals.

“It became this unnatural cleaving where craft became different from sculpture. I wanted to create a path forward where the two approaches to making objects could be dependent on each other. I realized I could use another form of weaving to further engineer the steel and have it become that a traditional craft object was doing the heaving lifting — that there would be these weaving buttresses, like tension bridges.”

She says the project taps into her interest in language. “In this case, I teased together the forms with the language of weaving, so the act of bending of the stakes, of starting with a flat, sunburst shape — when you prick them up it’s called the upsett, two t’s — I found it to be incredibly evocative. I was also thinking of time’s suspension, especially April and May, when the idea of when or how was completely suspended and we were all living in the present.”

In learning these skills, Kaufman has been enjoying a more communal way of learning. “In my grad student years [at Rhode Island School of Design; her undergraduate degree is from Vassar], you’re alone, in your studio, inventing a language that no one else has invented. In opposition, learning weaving is about, generally, women coming together and talking about techniques used by people for thousands of years. It’s a communal endeavor, and I have found joy in that. I’m completely dedicated to the traditions of it, yet my training compels me to invent.”

Sharing takes another shape in Kaufman’s work as a museum educator. She worked for years at the Aldrich Museum, running its school programs. She designs programming for Grace Farm, in New Canaan, and she’s an artist and guide (currently on furlough) at Dia.

“The Dia education department operates differently,” Kaufman explains. “We’re not docents. We’re hired as artists who come fully able to create experiences. Each guide — there are dozens — has a different approach. I love doing giant public tours, with 50 to 60 people, on a Sunday afternoon, leading them through engagement games, coming back to points in history, reading their body language. Did they feel heard and seen?”

Kaufman has two other projects ahead: a sculpture show at the White Rock Center for Sculpture Arts in Holmes and a group show at Bellport’s Marquee Projects gallery. She also has shown her art at the Dorsky Museum at SUNY New Paltz, the now-shuttered Matteawan Gallery in Beacon and the Field Projects Gallery in New York City, among other places.

Once those exhibits conclude, “the demands of my time are going to be domestic,” says Kaufman, who moved to Cold Spring in 2011. “I have a fourth-grader, and we don’t know yet about school, teaching. I see this as a year of diving deeper into what I’m always doing. The whole set-up of my life is different and I don’t know what will happen. We’re all going to have to find resources.”

For more information about Tension Bridge, which continues through Oct. 18 and is open by appointment, email [email protected] There will be an opening from 9 a.m. to 1 p.m. on Aug. 30, with reservations required.

Our original post gave the incorrect name for the Bellport gallery where Kaufman's work will be exhibited. It is Marquee Projects, not Marquis Project.