“We have a nice team,” Ryley said this week. “The players work hard and appreciate that we’re out here. A lot of them lost their spring [sports] season, and in the summer there were lots of doubts about this fall season.”

“We’re looking for leadership from Kelly and Maura,” Ryley said. “I’m also excited to see how our sophomore singles players have improved.” 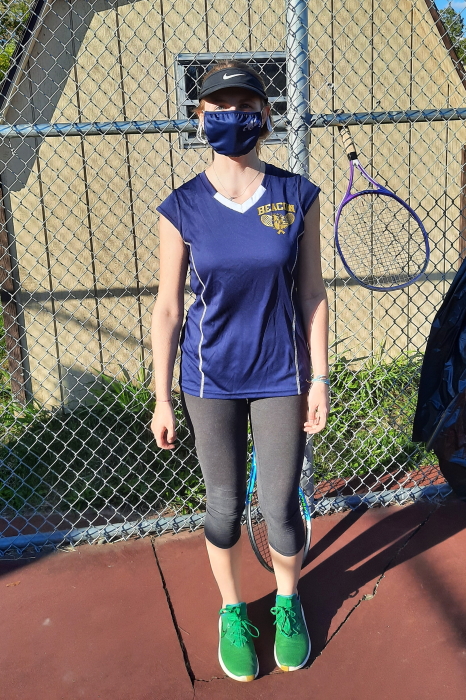 Gretta Anderson, a newcomer this year to the tennis team, at a recent practice (Photo provided)

Ryley is looking at a number of players to fill out the roster, including newcomers Elizabeth Ruffy, Gretta Anderson, Brianna Moleano, Nina Rivers and Tamar Adams.

“At least four of them will be varsity starters,” the coach said. “All of them have improved significantly, working on their own.”

Ryley said that, with a shortened season due to COVID-19 restrictions, half of Beacon’s 10 matches will be against Hendrick Hudson and Lourdes, who have traditionally been formidable opponents. “It may be tough to improve significantly,” he said. “But that’s how you get stronger, by playing good teams. We’ll be stronger than we were last year, and the future looks good.”

As far as protocols, Ryley says his players are on board. “I’ve been pleased so far,” he said. “They’ve been wearing masks through practice; they all know what’s going on. Right now, every day we get to play is a blessing.”