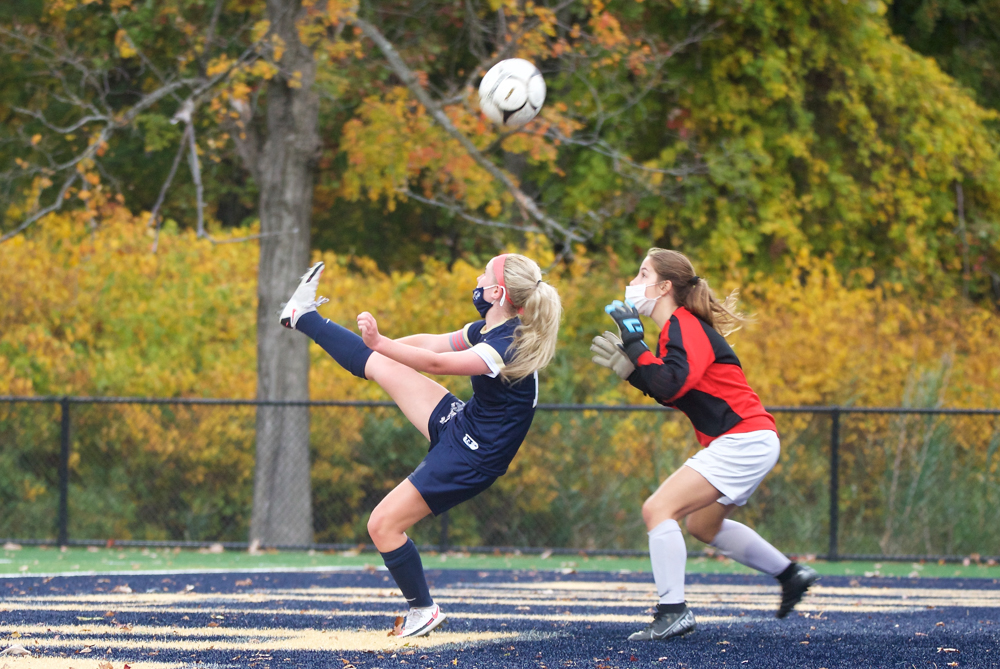 Beacon’s Claire Derrenbacher kicks a shot backward over the keeper’s head; it barely missed, hitting the top of the goal. (Photos by S. Pearlman)

Bulldogs kick off their season with a W

The Bulldogs fell twice last week, at home and away, to a tough Our Lady of Lourdes team.

At Beacon on Wednesday (Oct. 21), the Poughkeepsie squad scored two minutes into the game, although the rest of the first half was competitive. The Bulldogs had scoring opportunities, but an inability to finish has been a continuing problem.

The second half was a different story, as Lourdes hurt Beacon with its speed on the outside of the field. 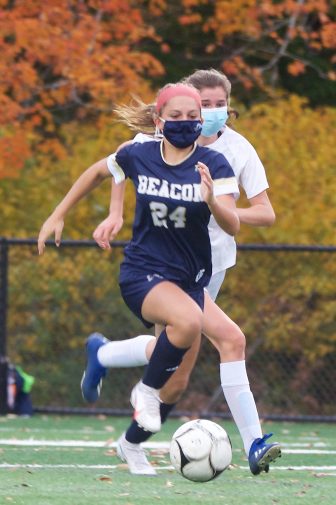 “We made some adjustments [after the first Lourdes goal], and the team played phenomenal with simplified roles,” said Coach Hugo Alzate. “They followed the plan and it led to some effective counterattacks and built a lot of confidence. But in the second half, they broke us down on the flanks. Their speed makes them a dangerous team.

“We learned a lot against Lourdes in those two games,” Alzate said. “And there were a lot of positives from our leaders, and our young group. We’re really looking forward to the rest of the season.”

The Bulldogs (1-2) are scheduled to host Poughkeepsie today (Oct. 23). Beacon will visit Haldane on Saturday (Oct. 24) and Ketcham on Monday.

Haldane knew it was in for a fight on Tuesday (Oct. 20) against North Salem, and the Tigers gave the Blue Devils all they could handle, going up 3-0 by halftime.

Coach Steve Schweikhart said each goal took a little more out of his team.

“We were solid the first 10 minutes,” he said. “But when North Salem scored 12 minutes in, I thought we got back on our heels, and they took advantage.”

That’s when the Tigers started to control possession and the game, he said.

“They started coming in waves, because they knew we were not connecting passes and getting out of our defensive third with any success,” the coach said. “It led to constant pressure on our defense. We were hoping to get out of the first half down 2-0 so we could regroup and maybe make a push in the second half, but when they made it 3-0 just before the half, that made things a lot more difficult.”

The team played better in the second half, but it was too late.

“We challenged the girls at halftime to play with more confidence and heart,” Schweikhart said. “I have no complaints there at all. It is difficult to play a quality team like North Salem without a true center midfielder. We had Sara Ferreira holding down the fort for the first two games, but she injured her knee and is out for at least two weeks.

“We had Sophia Scanga and Finola Kiter filling that role today, and they both did an admirable job. But it’s tough to ask kids who have not really played that position to step in and deal with a team like North Salem.”

“Ruby Poses has done a great job in the net as well,” he added. “Because we’re not scoring right now, her efforts have kind of been lost in the shuffle.”

Haldane lost at Croton-Harmon, 1-0, on Thursday (Oct. 22), to fall to 0-1-3. The team is scheduled to host Beacon on Saturday and Lourdes on Monday.