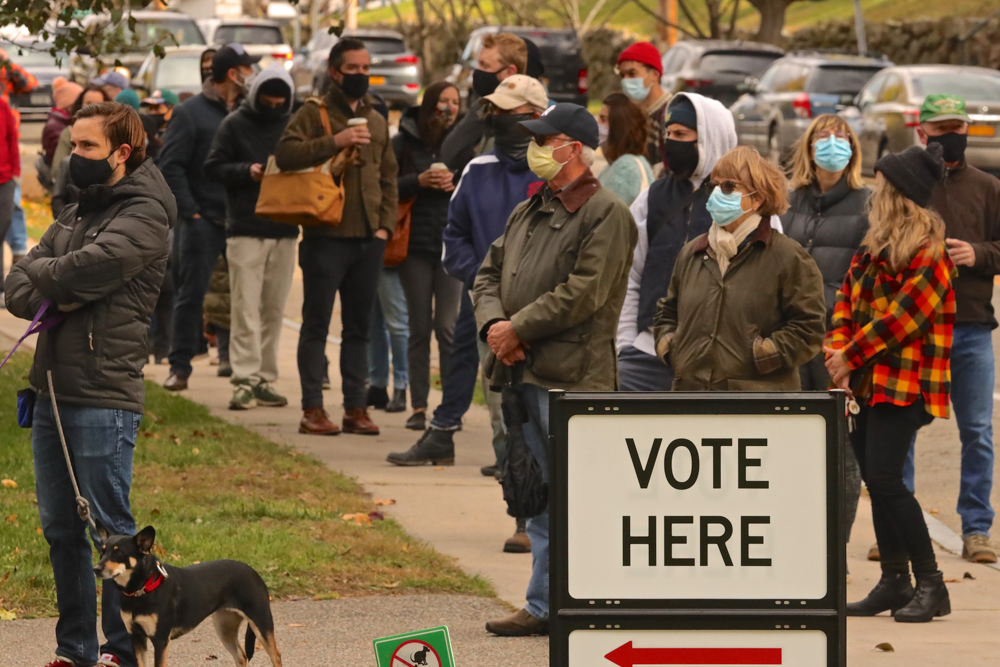 Voters waited in line on Election Day (Nov. 3) at the Methodist church on Main Street in Cold Spring. (Photo by Ross Corsair)

Incumbents in the Highlands held onto their seats this week in the U.S. House, state Assembly and state Senate.

In the Senate, Sue Serino, a Republican, held off a second challenge from Democrat Karen Smythe, whom she defeated in 2018 by 688 votes of 118,000 cast. This time, Serino built a comfortable lead of about 19,500 votes that should hold up against any surge for her opponent in absentee ballots.

In the U.S. House, Sean Patrick Maloney, a Democrat and Philipstown resident, declared victory in his bid for a fifth term with 47 percent of the vote, saying the absentee vote would only widen his margin over Republican challenger Chele Farley.

As it happens, turnout was about the same in Dutchess and Putnam in the 2016 and 2020 presidential elections — there were just more voters.

About 75 percent of registered voters cast their ballots in early voting, by mail or on Election Day, with about 145,576 votes in Dutchess (including 25,511 absentee ballots yet to be counted) as of Nov. 3 and 55,366 (including 11,140 absentees and 424 people who voted by affidavit ballot) in Putnam as of Nov. 6, according to election officials. (Affidavit ballots are used when a person cannot immediately be verified as eligible to vote at a particular polling place.)

That was about 13,000 more votes in Dutchess than in 2016 and 6,800 more in Putnam, but both counties also saw about a 15 percent increase in the number of registered voters. About 40 percent of voters in Dutchess and Putnam took advantage of early voting sites or mailed in their ballots.

With 118,384 votes counted, Serino led by a margin of 19,430 to represent the 41st District, which includes most of Dutchess and the western half of Putnam County. Smythe, who would need to win an overwhelming percentage of the uncounted absentee ballots, conceded defeat on Nov. 4.

“I congratulate Sen. Serino on her victory and on a race well-run,” Smythe said in a statement. “Even with 30,000 absentee ballots outstanding, I do not see a different outcome.”

Serino won 58 percent of the vote in Putnam and 69 percent in Dutchess.

Sandy Galef easily defeated her Republican challenger, Lawrence Chiulli, to win her 14th, 2-year term representing a district that includes Philipstown, although Chiulli improved his standing from 2018. Galef won 51 percent of the vote in Putnam County and 57 percent overall. In 2016, Galef won 65 percent.

In a race among seven challengers for four seats to represent the 9th District on the State Supreme Court, Sam Walker, a Mount Vernon judge, led with 20 percent of the vote with 93 percent of precincts reporting but no absentee ballots. Alexandra Murphy, a former assistant DA in Manhattan, had 13 percent; Robert Ondrovic, a trial attorney from White Plains, had 11.6 percent and Loren Williams, a Newburgh judge, had 11.2 percent.

In the 18th District, which includes the Highlands, Maloney led Farley by about 8,100 votes of more than 280,000 cast, without absentee ballots counted. Scott Smith, who appeared on the Serve America Movement (SAM) and Libertarian lines, received just under 1 percent. Maloney won Dutchess County with 50 percent and Farley won Putnam County with 57 percent.

Farley on Oct. 25 made a late challenge to the ballot, filing a lawsuit in state court that claimed the general election ballots were invalid because they listed Smith as the Libertarian candidate.

Smith received endorsements from the Libertarian Party committees in Orange and Dutchess counties but the state party did not endorse a candidate.

In dismissing the lawsuit on Oct. 29, Justice Mary Smith of the State Supreme Court in Westchester County noted that in-person voting had already started when it was filed and that Smith had been identified as the Libertarian candidate since April. 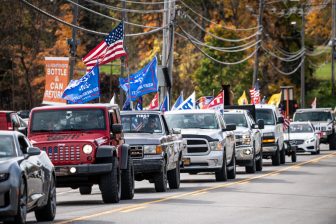 A caravan of vehicles with Trump flags and banners drove past the early voting site at the Fishkill Town Hall on Route 52 on Sunday (Oct. 25). (Photo by Alejandro Lopez)

In a contest that will hinge on absentee ballots, Peter Forman, the Republican incumbent, was leading Democratic challenger Jessica Segal as of Election Night by 7,385 votes of 120,065 cast. There were nearly 28,000 Dutchess absentee ballots to be counted as of Nov. 3, including 14,765 from Democrats, 5,284 from Republicans and 6,699 from independents, according to the Board of Elections.

Dutchess voters approved, with 62 percent of the vote, the creation of a seven-person redistricting commission to redraw the county’s legislative boundaries next year based on data from the 2020 census.

In Cold Spring, Heidi Bender and Kathleen Foley were elected to the Village Board,with 452 and 507 votes on 973 ballots cast, respectively, filling two seats that will be vacated by Lynn Miller and Steve Voloto. (Shortly before the election, Frank Haggerty announced he was running as a write-in candidate; 107, or about 10 percent, of the votes were write-ins.) Camille Linson was reelected as Philipstown Town Justice.

Anthony Mole, a 1993 Haldane graduate and Patterson town judge, was elected to a 10-year term as one of the two Putnam County Court judges. He will succeed James Rooney, who is retiring. Wendy Erickson, a nurse at Putnam Hospital Center, was elected as one of three county coroners. Both ran unopposed.

Three incumbents returned to the county Legislature for three-year terms. William Gouldman, whose district includes Putnam Valley, and Amy Sayegh, whose district includes Mahopac, both Republicans, ran unopposed. Toni Addonizio, a Republican who represents Kent and is chair of the Legislature, easily defeated Democratic challenger Vincent Fiorentino with 61 percent of the vote.

An earlier version of this story reported that Kathleen Foley and Heidi Bender ran unopposed for two seats on the Cold Spring Village Board. While they were the only two candidates on the ballot, shortly before the election Frank Haggerty announced he was running as a write-in candidate. According to the Putnam County Board of Elections, 107 votes, or about 10 percent of the total, went to write-ins. This has been updated in the story.