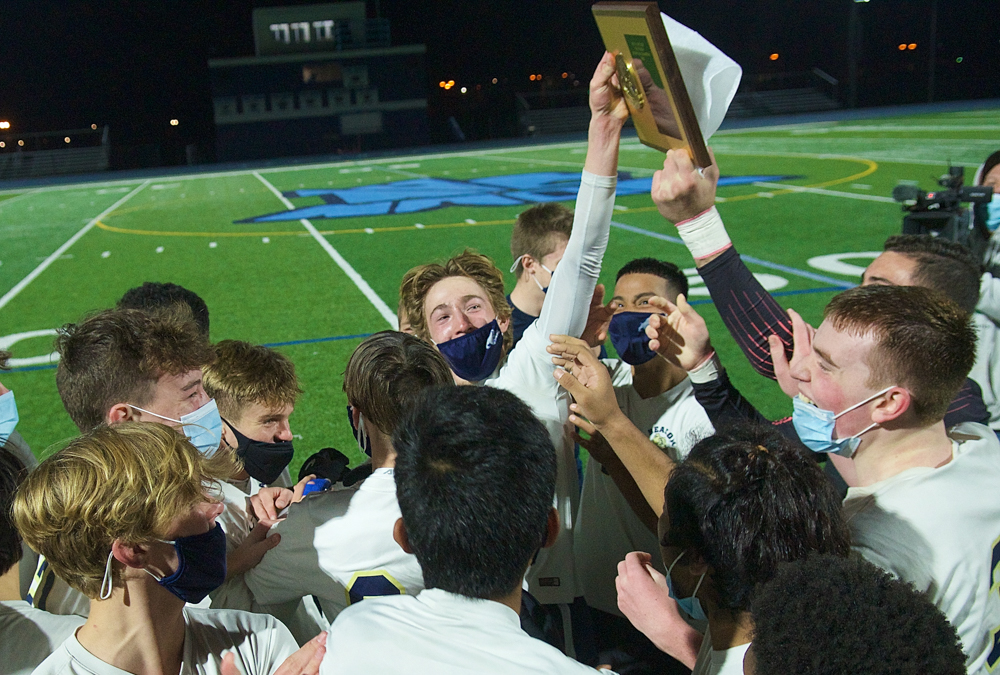 The Beacon High School boys’ soccer team, seeded No. 2 in the Section 1 Dutchess County playoffs, pulled off one of the biggest wins in program history on Saturday (Nov. 21), upsetting top-seeded John Jay, 2-1.

John Jay, which had defeated Beacon, 1-0, during the regular season, dominated the first half of the championship game.

The Bulldogs, who are in Class A based on student-body size, would not usually face John Jay, which is in Class AA, in the annual tournament. But because of the pandemic, the regional and state playoffs will not be held and state athletic officials realigned teams geographically for the sectionals to minimize travel. 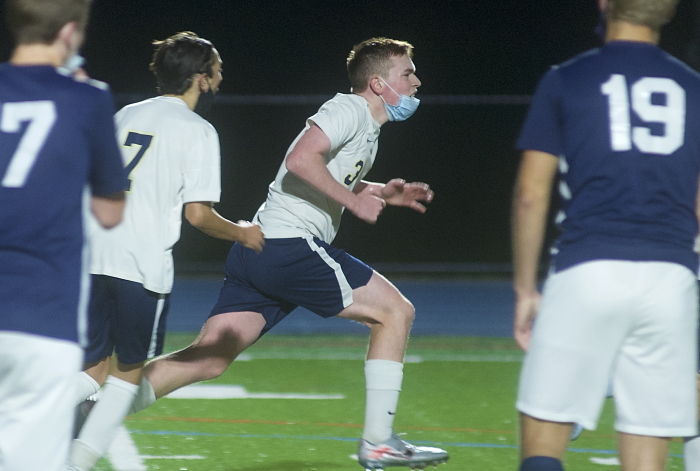 Tommy Franks after scoring the game-winning goal on a penalty kick (Photo by S. Pearlman)

In the Saturday contest, Beacon broke through just over a minute into the fourth quarter when senior captain Warren Banks found space in front of the net for a 1-0 lead.

After Beacon was called for a handball in the box, Zach Rabadi of John Jay delivered a penalty kick with 15:18 remaining to tie the game.

But five minutes later, the Bulldogs were awarded their own penalty kick and Tommy Franks blasted a shot into the lower corner of the net.

“In the first half they had a lot of chances, but we survived the scoring melee and kept battling,” said Dillon Kelly, another of the team’s captains. “In the second half we knew it was a new game. It was such a crazy year, and to come together and win, it’s insane how we had this sense of togetherness — something normal.”

“We are thrilled to come out of 2020 with a championship and to beat an exceptional team like John Jay,” said Coach Craig Seaman. “Jay came out with three center midfielders, and their pace was outstanding. Honestly, I was just hoping to survive the first half.”

Beacon made adjustments, moving the alignment of its four defensive backs and, more importantly, switching to a 4-3-3 alignment to better match up with the Patriots. “After that, we played much better,” Seaman said. “We had bodies in the right part of the field.”

After outlasting Ketcham in a marathon match that included four overtimes and a penalty-kick shootout, the Beacon girls’ soccer team ended its season Nov. 21 in the sectional semifinals with a lopsided 9-0 loss to AA power Arlington.

“Our strategy was to hold them down in seven-minute intervals and get a lot of girls experience,” said Coach Hugo Alzate. “Arlington has a senior-heavy lineup, and we start five freshmen and an eighth grader. It was good for the girls to see how Arlington plays. We strung some passes together, gained some confidence. I’m proud of all of them and the effort they gave.”

Alzate said his team also did well dealing with the complications of COVID. “We got 12 games in,” he said. “Considering it could have been zero — all of the athletes in Section 1 showed great resilience.”