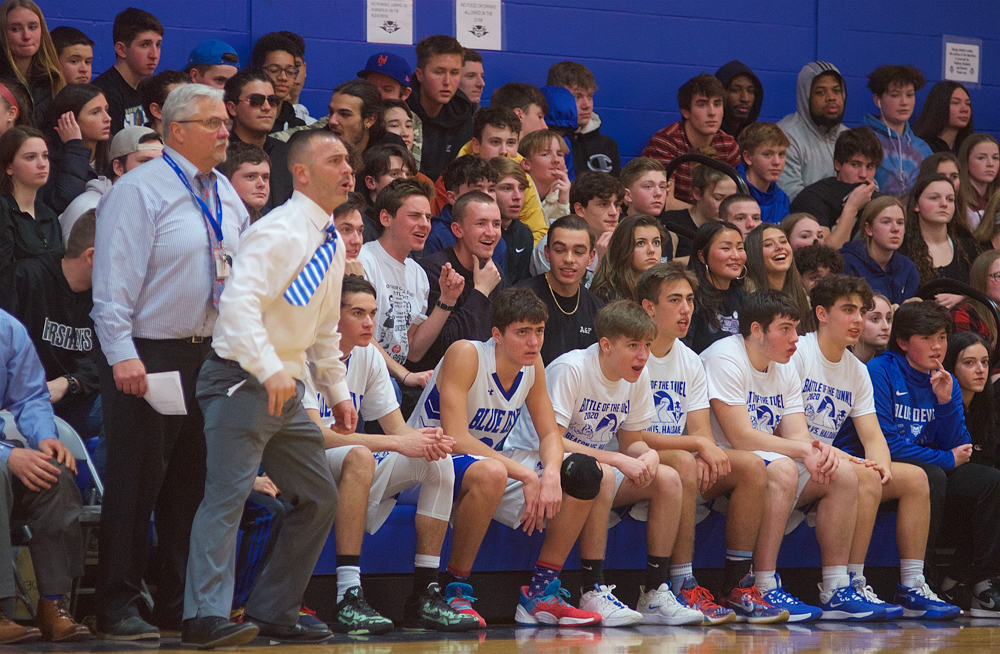 With winter “high-risk” sports approved to begin practices this week, the Beacon boys’ basketball team hit the court running. But even a shortened season of 12 games may be challenging because the Bulldogs lost all of their starters to graduation.

In Region 1, which includes Dutchess and Putnam counties, the 12-game season will be followed in early March by a tournament. (State tournaments for winter sports have already been canceled.)

Teams opened practice on Wednesday (Feb. 3) — unless delayed by the snowstorm — and need to complete six practices before their first game.

Amid the COVID-19 shutdown, sports deemed by the state to be high-risk because of their close physical contact had been delayed from their November start. 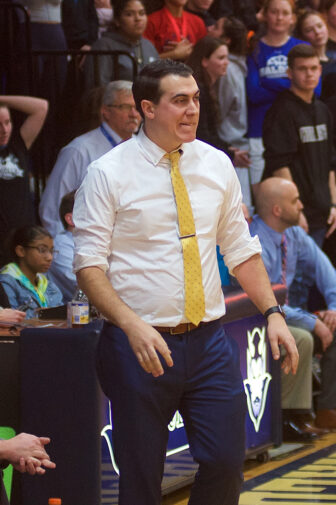 Beacon coach Scott Timpano is looking to rebuild a team that lost all its starters to graduation. (File photo by S. Pearlman)

“I didn’t think it was going to happen,” said Coach Scott Timpano. “Once we got the green light, it’s been insane trying to get everything ready. There are still more questions than answers, but for the seniors it’s great that they have a way to end their high school careers. And for the younger guys it’s a good chance to improve.”

“Chase and Dillon are our most experienced players,” he said. “Darien, Adrian — we’re hoping they’ll be able to improve under greater pressure. It’s a big jump from freshman to varsity ball.” With only two seniors and a short season, he said he hopes to give the younger players opportunities to play “and get through the season without problems. We haven’t been this young in some time.”

Beacon hopes to open its season with a game late next week. Spectators will not be permitted.

The Blue Devils were thrilled to get the news that their season was a go, and that it could begin as early as next week.

Coach Joe Virgadamo held his first practice on Wednesday (Feb. 3) and used the words “awesome” and “amazing” to describe it — probably not typical of any first practice. 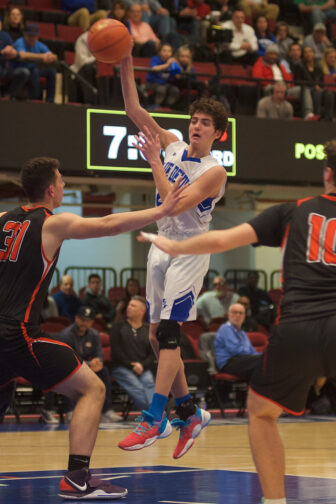 Haldane’s Matteo Cervone during a tournament game in March

“You could see the kids smiling through their masks,” he said. “I still don’t think they’ve realized we may be playing games next week. They have a lot of mixed emotions. A lot of them haven’t played a game since March 2, when we lost to Tuckahoe” in the sectional tournament.

Last year’s team finished 15-6, earning the No. 2 seed in Class C before falling to Tuckahoe, 42-38, in the semifinals at the Westchester County Center.

“Irwin and Viggiano are versatile players with great shots and a great attitude,” Virgadamo said. “They’re well-balanced and can be a problem on the offensive end. I’m expecting good things from the others, as well.”

Virgadamo will look to the Santos twins and Cervone to lead the way. “They’ll give us hustle and communication,” the coach said. “Those three and Soren will be our floor generals.

“I’m looking to play as many as we can,” he added. “We want to make it the best possible season. We’ll run in transition and create havoc.”

Virgadamo said wearing masks during play could take some getting used to. “They know it’s the norm now, and all teams are in the same boat. I just hope our opponents, and our players, have fun.”

Haldane is expected to play its traditional league opponents Putnam Valley, Pawling, North Salem and Croton-Harmon, followed by a regional playoff. Spectators will not be permitted at games.