While others might still be unpacking after a move to Beacon from New York City six months ago, Tara O’Grady is preparing to launch what she hopes will become a series of livestreams from the Howland Cultural Center. 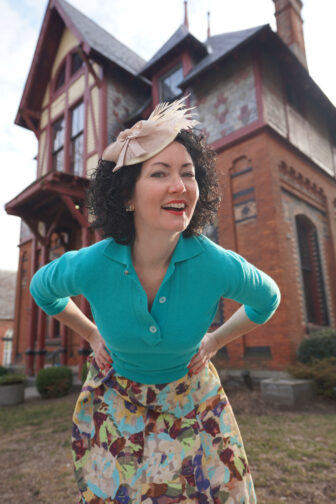 Howlin’ at the Howland is scheduled to debut at 8 p.m. on Thursday (March 11). O’Grady, filmmaker Jon Slackman and guitarist Tony DePaolo will share videos shot locally and perform jazz standards. Tickets are $15 at howlandculturalcentertix.com. In future episodes, O’Grady and Slackman hope to showcase local artists and include a teaching component centered on each guest’s expertise.

O’Grady came to teaching first, and singing second, but her affinity for vintage extended to both and has long been a part of her aesthetic.

“I always was obsessed with vintage-clothing culture and retro lifestyle,” she recalls. “I loved the Golden Age of Hollywood; my parents would play records from the 1940s and ’50s. My brother played in the jazz orchestra in high school and exposed me to big-band music. Everyone was into U2 and Depeche Mode, and I was loving Patsy Cline and Ella Fitzgerald. When I was 14, I dressed up as a bobby-soxer for Halloween; it was with me all the time.”

O’Grady managed to find like-minded souls. “All my friends were purposely dressing up in vintage, and we had milk and cookies at our parties. Yes, we were weird. Usually, kids want nothing to do with their parents’ music. In high school, I performed in all the musicals — West Side Story, Grease — and I preferred to wear that stuff offstage, too. I connected with another time period and it brought me joy.”

O’Grady sampled writing, drawing and dance before studying television and film production in college. After she graduated, she flirted with acting but says her parents sat her down and told her she needed to “get a real job, with benefits.” She earned a master’s degree in education and taught high school arts for three years. “But I was an artist and I wanted to perform, so I moved to Seville to learn flamenco.”

Told by her teachers that she had the technique but not the requisite Spanish “passion,” O’Grady returned to New York and switched to swing dancing. “I was swinging to all that stuff that Ella and Louis Armstrong were playing,” but soon realized she wanted to be writing the songs, and singing them.

O’Grady describes her songwriting as eclectic. “I write mostly jazz, blues and folk. When I write a song, I run with whatever comes out of me; I’m not thinking of what it can slot into. My [five] albums have country, zydeco and pop components. I tend to perform live in jazz clubs and at Irish festivals, but I’ll sing an Irish song and swing it like Billie Holiday — it’s basically American roots music.”

While teaching, O’Grady forged ahead with forming a jazz band. They did monthly gigs until she was laid off from her day job in 2011 during the recession.

“I’m so glad I lost my job or I never would have taken the plunge,” she recalls. “Every time we played in Manhattan, someone in the audience would hire us for another gig: a businessman from Denmark flew us to Copenhagen for a private party; we played jazz festivals in Ireland; a corporation brought us to Arizona.”

All was going swimmingly until a year ago, when O’Grady contracted COVID-19 and was sick for five weeks, including three weeks spent in bed with a fever.

“It took me months to regain my strength and walk,” she says. “By June, things were getting pretty desperate. My neighborhood felt dangerous, with so many people needing to survive. I didn’t want to be in the city anymore, so I started driving my car up into the Hudson Valley. A friend in real estate said, ‘Beacon is your town.’ I drove up on July 9, drove past the Howland Center and immediately thought, ‘I’m going to live here; I’ve found my home.’ ”

After renting an apartment, she says she began meeting musicians and artists immediately, including Slackman, who asked O’Grady if she’d like to make music videos of her songs. Soon they were posting them on social media, where they were spotted by folks at the Howland, who invited the pair to come up with something.

They decided on a format where O’Grady will write the episodes and perform, and there will be interviews in which she collaborates with local artists, makes some art with them and sings with guest musicians.

“I’m honored and thrilled that the Howland Center found me,” O’Grady says. “I feel embraced because I moved here with nothing to do but wait out the pandemic. The fact that I can create my own show and get it up and out with local artists is thrilling.”