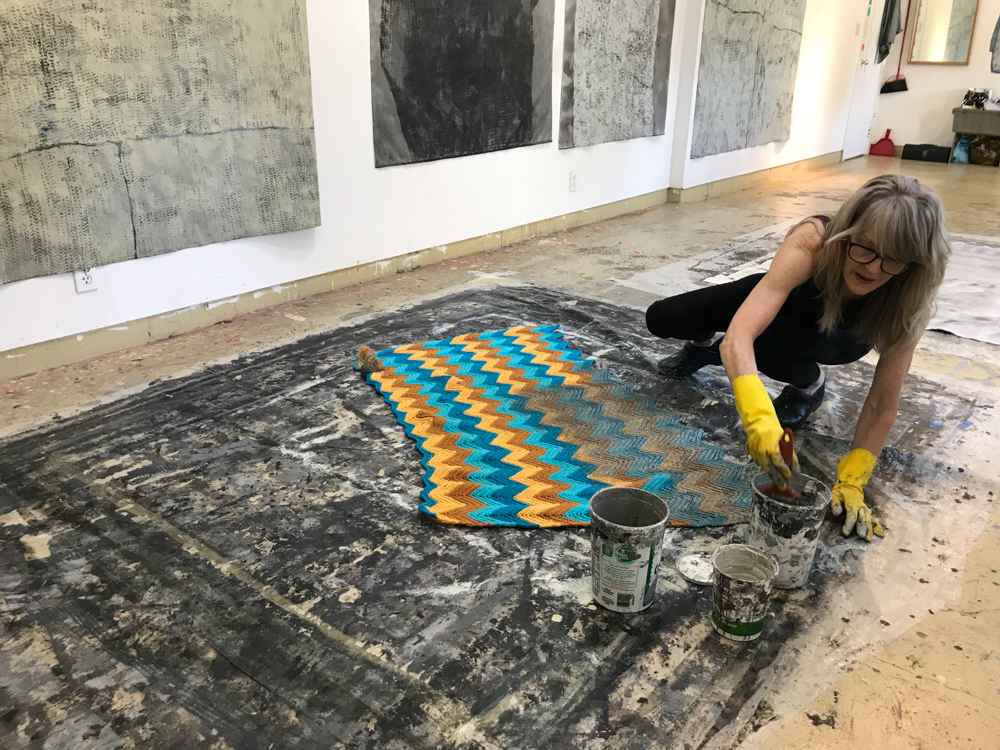 Caroline Burton is shown at work during a residency at the Virgina Center for Creative Arts, painting an afghan before transferring the paint from the afghan onto canvas. (Photo by Azita Mora)

Caroline Burton gets physical in her line of work — and that line is art.

The large, mixed-media paintings she’ll be exhibiting in Incarnations, a solo show opening Saturday (March 20) at the Garrison Art Center, are hewn from unstretched canvas, textiles and paint, then pulled, sewn, torn again and printed on — but not necessarily in that order.

Burton says her process often involves “cutting a huge piece of canvas and placing it on the floor, adding layer after layer. This becomes the underpainting. In another area of my studio [in Jersey City], I paint an afghan, lay it on top, use a tiny hand-printing roller, then press the paint onto the surface. Then I pull off the afghan from the canvas to see what’s there. Maybe I do another layer or part of the canvas with the same afghan, or a different afghan. Sometimes I rip them up, then sew them together and…”

If you haven’t followed all that, you’re in good company. “Curators and other artists come to my studio and can’t figure out how they are made,” she says. “They see a pile of afghans and still don’t get how I do it.”

The work is “very physical, exhausting,” says Burton, who has mounted previous solo shows in galleries in New York, New Jersey, Oregon, Ohio and Vermont. “I’m stepping on them, getting paint all over my feet as I go into this zone of going to see what happens, how they manifest themselves.

“Some artists plan out everything and see the end result before it’s there,” she says. “It’s not often like that with me. I might start out with a composition, but partly because I don’t know the pattern that the afghan will make, it’s a dialogue between me and what’s happening with the canvas. After days or hours, the image appears.”

When Burton was attending graduate school 20 years ago, she wasn’t working in this way. “I was fumbling along” with oil paintings, she says. “I started making sculpture to understand what I was painting. I thought I was making art pieces, but they were more like big sketches. The finessing, the surfaces and imagery become richer.”

Eight years ago, after experiencing a reaction to the solvents used in oil painting, Burton began “playing around with canvas as an object: dipping it in ink, figuring out how I could make marks on a canvas, ripping it into pieces and sewing them back together, incorporating Bubble Wrap, cut-up denim, chicken wire.

“As I was experimenting, this other body of work started to develop. I started thinking more about my printmaking roots, painting on one surface and transferring it to another.”

From her father, an engineer, Burton feels she learned to see things in grids, which she calls “an underlying structural form that holds all the work together. Even if I’m painting an object, the object has a grid in it. I’ve made some bronze rabbit pelts, I cast them, and I consider the fur to be a grid. Skin cells, under a microscope, look like a grid. A grid holds it all together and makes sense.”

But Burton says she wouldn’t have become an artist without the influence of her mother. “I was closer to my father, but my mother is the one who gave me permission to go after art. It was always my favorite subject, and she put me in classes outside of normal school hours, which I loved.”

She says her mother and high school art teacher talked her father into letting her attend the Cleveland Institute of Art, where she majored in graphic design. (“I needed to earn a living,” she says.) She continued her studies at the Mason Gross School of the Arts at Rutgers University, where she received a master’s of fine arts degree.

After moving to New York, Burton stopped making art for a few years. But a monoprint class at the Parsons School of Design introduced her to a new community, inspiring her to start anew, and she hasn’t stopped.

“If you’re an artist in your heart, in your soul, you have to make your work,” she says. “I was unhappy. Something was profoundly missing. After grad school I had to have a studio, because making art was so much more a part of me and my existence. My studio is a sanctuary, a laboratory. Even if I’m depressed about the world, in my studio I’m very content.”

Incarnations will run from Saturday (March 20) through May 2, with COVID-19 precautions in place, at the Garrison Art Center, 23 Garrison’s Landing. The exhibition is open from 10 a.m. to 5 p.m. daily except Monday.