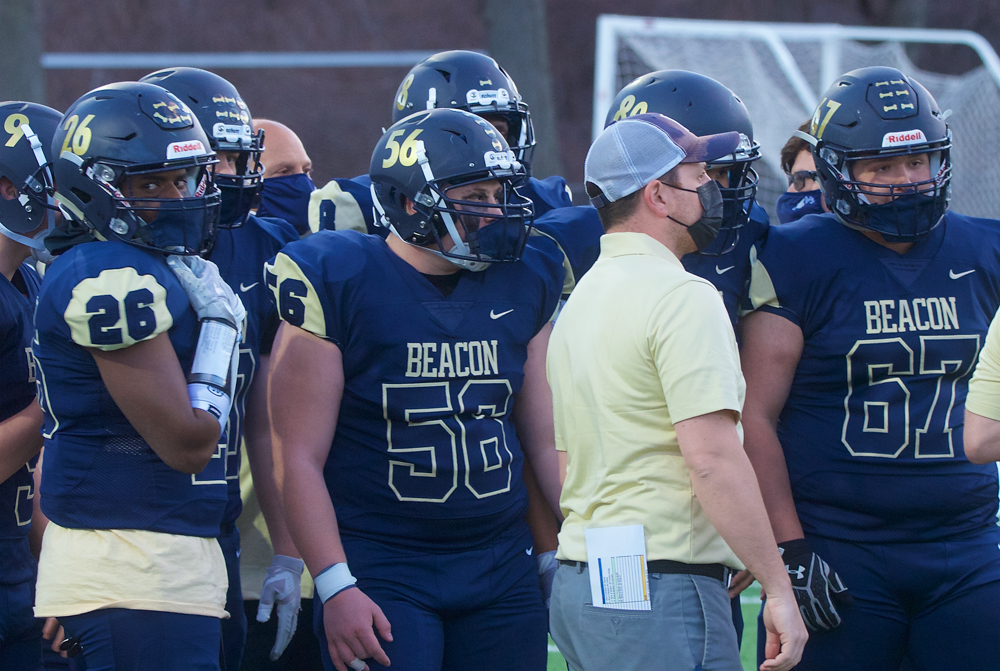 The Beacon football team has struggled this season because of COVID-19 quarantines, with two games canceled. (Photos by S. Pearlman) 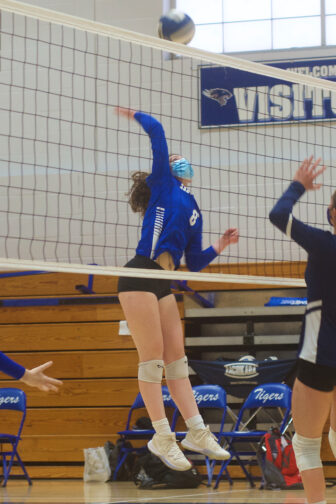 Despite the victory, “we didn’t play our best game,” said Coach Kristina Roling. “We’re happy we came out with the win. They know how to keep the ball in play; we had some long rallies.”

“We do need to clean up some stuff for the playoffs,” she added. “But the girls have a strong mindset; being down doesn’t shake them.”

The Blue Devils are hoping for a high seed in the Section 1 regional playoffs. (There is no state tournament this year because of the pandemic shutdown.) They will compete in the Northern Westchester/Putnam small-school division with Lakeland, Peekskill, Walter Panas, Hendrick Hudson, Putnam Valley, Briarcliff, Croton and North Salem, and should be the No. 1 seed. The potential No. 3 seed, Croton (8-2), handed Haldane its only loss this season, and No. 2 Panas (10-2) has a solid team, as well.

Roling said her team is still getting better. “Maria, Jill, Meghan and Megan have been the backbone. They’ve all been the model of consistency and a positive attitude. Zoe Silverman and Rachel Iavicoli switched positions and have been such a force on the floor, especially with serving.”

Haldane is scheduled to finish its season today (April 16), hosting Carmel. The Beacon squad, meanwhile, lost this week at Lourdes and Carmel to fall to 0-13. The Bulldogs will enter the Dutchess County playoffs for Section 1 as the No. 7 seed and will likely face John Jay-East Fishkill (8-1) or Arlington (9-2).

The Haldane squad played a game on Saturday (April 10) that it might just as soon forget, missing an early scoring opportunity before falling, 28-0, to the defending Section 1, Class C champion Valhalla.

Haldane (1-3) forced a fumble early but couldn’t convert it to points, and things went downhill from there when the Vikings quickly scored on runs of 3 and 75 yards.

The Vikings added a 1-yard touchdown run in the third quarter and a 6-yard score in the fourth.

“They did a good job of bottling us up,” said Coach Ryan McConville. “In the second half we couldn’t get anything going. We need to get back to fundamentals — better blocking and better tackling.” 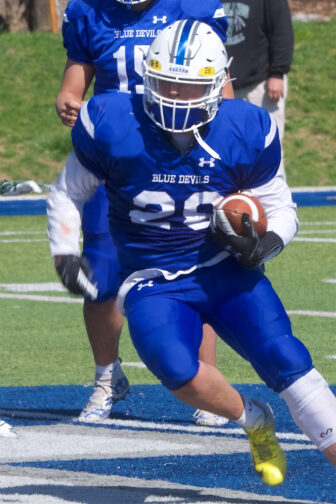 Darrin Santos ran for 50 yards but the Blue Devils were shut down offensively in a loss to Valhalla.

Quarterback Dan Santos completed 5 of 16 attempts for 11 yards and was picked off three times. Darrin Santos ran 10 times for 50 yards.

The Blue Devils are scheduled to travel to Rye Neck (0-3) on Saturday (April 17). Haldane will close its season at Tuckahoe in the Section 1, Class D title game on April 24. The schools are the only Class D teams in the section.

Beacon’s game scheduled for April 9 against Somers was canceled because of ongoing COVID-19 issues. After a 10-day pause following the previous game against Tappan Zee, Beacon didn’t have enough healthy players. The Bulldogs are scheduled to close their regular season hosting Lourdes at 7 p.m. on Saturday (April 17).

Haldane is accepting nominations for inductees into its Athletic Hall of Fame, which honors athletes, coaches and teams. See bit.ly/haldane-hall-fame. The deadline is May 1. Selections are made by a nine-member committee of coaches, community members and a school administrator. The 2020 induction ceremony was postponed because of the pandemic shutdown.

Beacon High School also postponed the induction ceremony for its most recent Athletic Hall of Fame class until the winter of 2021-22. Nominations will be reviewed in the fall by a nine-member committee of coaches, Hall of Fame inductees and community members. See bit.ly/beacon-hall-fame.