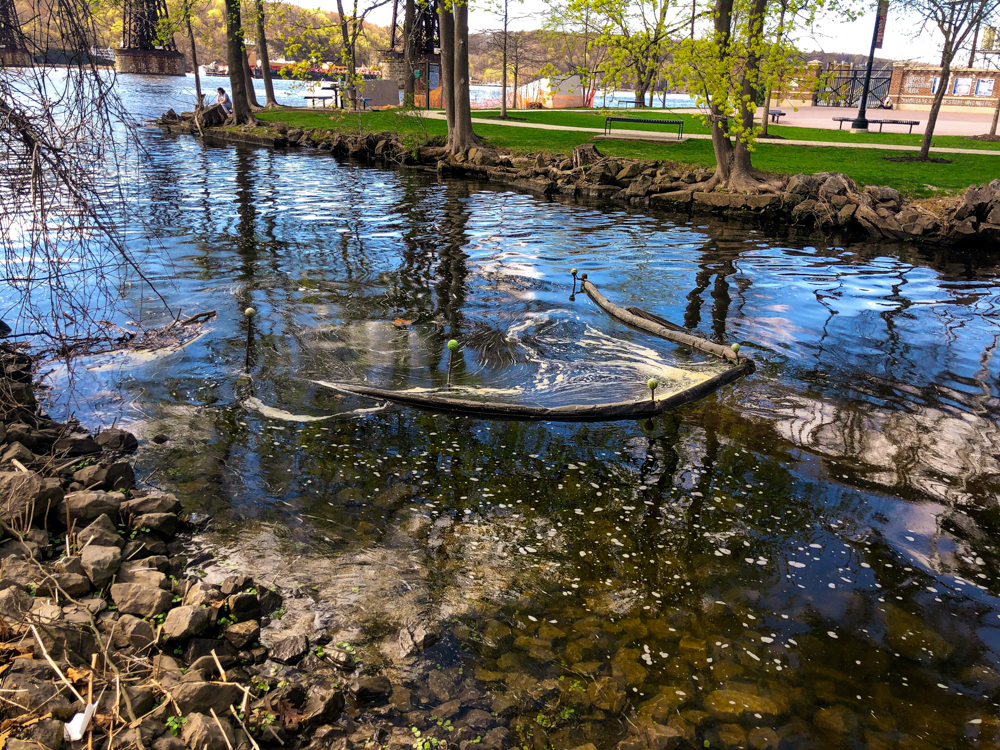 A fyke net at the mouth of the Fall Kill Creek in Poughkeepsie (Photos by B. Cronin)

Glass eels return to the Hudson

It’s called a fyke net: A long cone made of mesh, staked into the creek bed with an entrapment near the base of the cone to catch anything small enough to swim into it. The state Department of Environmental Conservation (DEC) places these nets every spring, with the wide opening of the net against the current.

That seems like the wrong way if you want to catch anything, but everything about the creature the nets are designed to catch seems improbable.

“Eels are amazing creatures,” says Sarah Mount, a scientist with the agency’s Hudson River Eel Project. She says this often. Swimming upstream is the least of it. Waiting for us in the net are “glass” eels, the second of the four major transformations the creature goes through. Each is few inches long, a few millimeters thick and clear as gin. They have already traveled more than 1,000 miles to get to this point in the Hudson.

Where did they come from? “The eel question” is one humans have been attempting to answer for millenia. Mount says that the best scientists can tell, all American and European Eels are born in the Sargasso Sea, northeast of Bermuda. The closer you get to the Sargasso, the smaller the eel larvae become. The working hypothesis, she says, is that when eels transform in the final stage of their lives (into silver eels) they swim back to Sargasso, spawn and die.

Wherever they are born, eels float along the ocean currents for six to 12 months and eventually become glass eels. One group makes its way to the East Coast and the other to Europe. We don’t know how they decide. We also don’t know why some of the American Eels head for the Hudson, or what drives them to Fall Kill, Indian Brook, Quassaick Creek or any other tributaries to transform into yellow eels and spend the majority of their adult lives there.

Further, we don’t know what triggers yellow eels to — from 5 to 50 or more years later — head out to sea. Scientists do know that during this final phase they travel without eating because their stomachs shrivel and are replaced by reproductive organs.

“I can’t not be here,” says Mark Angevine, a science teacher at Poughkeepsie High School with a salt-and-pepper beard who is wearing a face mask that reads Black Sabbath. Angevine has volunteered with the Hudson River Eel Project since it was created in 2008. Some of his students call him “the Eel Man.”

He’s at Fall Kill with a fellow teacher, Lori Thompson, and three students to meet Mount for a weekly check of the fyke net. 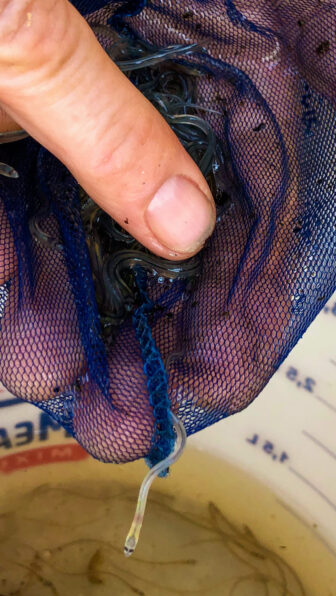 The Hudson River Eel Project hopes to tackle a few problems. First, for some reason, eel populations have been crashing since the 1980s. The European Eel is considered an endangered species. It could be climate change, overfishing, habitat destruction and/or dams. Scientists need to know more about migration, and tracking glass eels is one way to do that. The DEC has a dozen nets in the Hudson but not enough staff to check them each spring, so they rely on volunteers.

Mount likes to tell students that, when she was a girl, she did not dream about becoming an eel scientist. But she liked animals and, in college, did a project with eels. “You never know what’s going to stick with you,” she said.

One of the Poughkeepsie students, Kevin, is a senior who has checked the nets before and is raring to go. Cynthia and Sheri, two sisters who came with their mom, are hesitant. After putting on waders and passing around a bottle of hand sanitizer, we gingerly step down the rocky embankment into the cold, rushing water. The tide is falling, so it’s only knee-high, but the rocks are slippery.

Spottail shiners, which are too weak to fight the current, hover at the mouth of the net. One by one, everyone peers into the trap. Dozens of clear eels squirm in the folds. The students gingerly pick each one up and drop it into a bucket filled with river water while the teachers use brushes to clean algae off the netting. (The net also caught a tessellated darter and a small bluegill.)

When the trap has been emptied, Kevin and the teachers head to shore with the buckets to count eels, while the sisters recheck the net folds. The team moves the eels from one bucket to another while counting aloud. Onlookers peer into the buckets. “Thank you for taking care of our river,” says a man passing by.

The final count is 192 — or 194, as Angevine at one point reached into the creek to catch two — and four “elvers,” or older glass eels that are losing transparency. The eels will be driven upstream to make sure they don’t end up back in the fyke net and get counted twice.

In addition to fyke nets, “eel ladders” are placed at some dams and waterfalls; they are tubes that lead to buckets on shore. Volunteers check the buckets a few times each week, count the eels and release them upstream. Even without that push, some eels reach and get over the Troy Dam. “We’ve found them in the Mohawk River and the Upper Hudson,” Mount says.

They have been finding more eels everywhere. Although the glass eel population is only a fraction of what it was decades ago, the numbers have been growing in the past few years. As with many things involving eels, no one is sure why. Mount says she’d like to think it is the result of conservation and community engagement and advocacy. “That would be one great reason,” she says.

Mount turns and calls to the sisters, who are still in the creek, telling them to come ashore. But they remain in the water, turning the folds of the net, looking for eels.