The Fishkill Landing correspondent for a Brooklyn newspaper reported that authorities were looking for a woman who apparently starved a 7-year-old boy to death at Stormville. The child, who belonged to the “strong woman” of O’Brien’s circus, had been locked in a room with his hands behind his back. According to the reporter, the woman had purchased the child in Paris for $100 to perform with her.

A portion of the dock at Dutchess Junction gave way, sending about 20 tons of pig iron that had been piled up awaiting shipment into the river.

The Newburgh Journal decried the “lounging rowdies” who insulted and often robbed passengers waiting at the Fishkill Landing train depot.

The inhabitants of Glenham approved a new school, voting to raise $1,500 to purchase a site and $7,000 to build the structure.

The former Continental Hotel on Fishkill Landing was transformed into retail stores.

Mrs. Joseph W. Wood, on Mount Honness, about 2 miles from Fishkill, was reaching for a utensil in a closet next to her chimney when she was bitten between the wrist and elbow by a copperhead hidden in the stone work. She drew the snake out with tongs and applied saleratus [baking soda] and vinegar to the bite.

John Turner, 45, died after falling about 50 feet from the railroad bridge in Glenham. He was survived by his wife and seven children.

Eugene McDowell, who disappeared from Matteawan on Aug. 24, wrote his wife from Herkimer County to say that his mind had been a blank from the Sunday night before his departure until he found himself five or six days later being treated by a physician on a canal boat near Little Falls. He said the doctor said the illness was due to “business worry, overwork and excessive smoking.”

Mark McGoldrick was mortally wounded in an attack near his home. “The neighborhood is afflicted by ruffians who have defied the law all summer,” reported a correspondent for the New York World. “The attraction for these outlaws is the 2,000 or more men who work in the brickyards north and south of Fishkill Landing. The laborers are paid on Saturday nights and fall easy victims as they wander along the railroad tracks between the several villages.” Since the spring, 12 laborers had been hit by trains, although authorities suspected robbers placed their unconscious or dead victims on the tracks. McGoldrick, who had been struck in the head with an ax, was spotted on the tracks by an alert engineer. In his delirium at Highlands Hospital, he cried out, “For God’s sake, don’t slug me!” The next day, the body of Patrick Kelly, who worked at a brickyard at Dutchess Junction, was found floating in the Hudson with his skull crushed.

An inmate escaped from the Matteawan State Hospital into the village, where he was chased by suspicious residents until being caught south of the lumberyard. Benjamin Knapp and Nelson Sirrine split a $25 reward.

A windstorm knocked down many communications wires but the linemen said they would have everything fixed within a few days.

A photograph of the daughter of baggage master E.S. Colden that won first prize at the Orange County Fair was on display in the barbershop window of Jacob Larger in Bank Square. It was taken by Bowman & Johnson of Newburgh.

The Common Council heard a proposal to build a memorial building to honor soldiers killed in the World War.

Sarah Seaman of Beacon became the first girl in the state to receive a college-entrance diploma after only three years of high school.

George Donaldson of Glenham, who was sent to Sing Sing after breaking out of the Beacon jail, was caught attempting to dig a hole in his cell with a piece of tin.

Caroline Brazee, 83, sued her son, William, over a wood lot in Beacon. She said she had signed an agreement to have him look after the property and keep it clear of underbrush but discovered later it was a deed.

Beacon High School said it was interested in joining the reorganized Central Hudson Valley Interscholastic Athletic League with a basketball team but had no immediate interest in football, baseball or track.

A member of the Ku Klux Klan attempted to recruit a shop owner to start a Beacon chapter, claiming the Ossining branch had 800 members who had paid the $10 initiation fee and $20 for a robe. The delegate, thinking the retailer was sympathetic to the cause, emphasized that the local Klan was not against Catholics.

Following four years of litigation, the city lost a lawsuit filed by Veronica Meyers after she was injured in a fall on a sidewalk. The judgment was $5,859.

After visiting a friend, Morris Keating returned to his parked car on Fountain Street and found two young men sitting in it. When he asked what they were doing, they said it was none of his business. The men fled when police arrived.

Authorities were searching for a Beacon mother who disappeared, leaving her two toddlers behind, after allegedly being beaten by her husband, an employee at the Matteawan State Hospital.

A judge sentenced the former clerk of the Fishkill National Bank in Beacon to 30 days in jail and a $250 fine, saying he was imposing the minimum sentence for embezzlement because the man stole the money to pay his wife’s medical bills.

Police identified the laundry mark on the shirt collar of a man who had jumped in front of a train at the Beacon station as belonging to People’s Laundry, but the firm said it had not used the mark in 15 years. The man, a hat factory worker and Army veteran who lived at the Beaconview hotel, was later identified by his fingerprints.

A demonstration by 10 disabled veterans at the Hotel Plaza at New York City to prove they could work if properly trained prompted the Poughkeepsie Journal to profile Melvin “Ben” Franklin of Beacon, who had been advocating for handicapped vets in the workforce for 25 years. “The disabled man is often a better employee than the man who has never been sick,” he explained. “After a fellow has fought his own battle, he works harder.”

Two men escaped serious injury when their Piper Cub crashed on the grounds of the Matteawan State Hospital.

Paul Gordon, 44, died at his home. Known as the “Robin Hood” of Dutchess County, he contributed an article on archery to the Encyclopaedia Britannica and made bows and arrows at his Tioronda Avenue craft shop.

Soon after Beacon’s 25 bus stops were each given a fresh coat of white paint, a city tar truck repaved the streets, covering the markings.

Melio Bettina of Beacon won a convincing decision over Eldridge Eatman, one of champion Joe Louis’ sparring partners, in a bout in Connecticut. The heavyweight’s manager, Jimmy Grippo, said he had scheduled three fights for Bettina over two weeks in October in Chicago, Baltimore and Detroit in pursuit of a match against Louis. 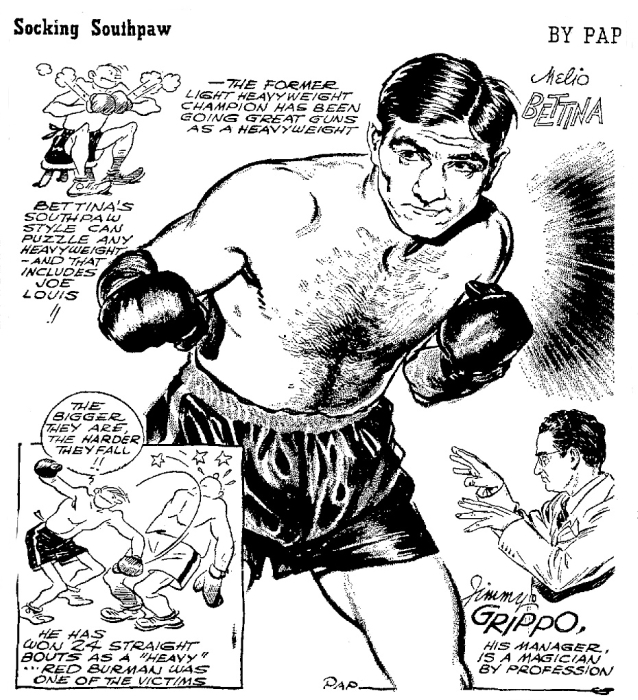 The state recommended that a 3.5-mile arterial highway start on Route 9D south of Dutchess Junction, proceed north past Craig House, across Fishkill Creek and west of South Avenue to Wolcott Avenue. It would then extend north along Hudson Avenue, Park Avenue and Ferry Street and end at I-84. An alternative route would have taken the highway closer to the river.

Art Smith, the first-year coach of a Beacon High School football team that had one victory in the previous four seasons, said his squad “had a whole new attitude and it’s a good one.”

The Beacon school board sued Beacon for $62,000, saying the city had shortchanged the district in tax sale proceeds.

Mayor Robert Cahill said that petitions calling for a riverfront park had apparently taken a “slow boat to China” and not yet arrived at City Hall. Folk singer Pete Seeger and the Beacon Sloop Club organized the signature drive, saying that the park would only cost each taxpayer 50 cents a year.

The couple who owned the Fisherman’s Inn on Route 9D in Wappingers Falls were charged with kidnapping Jasper Canzoneri, a New York City jeweler, who was rescued from an apartment on North Cedar Street in Beacon. Police said Canzoneri had been abducted on a Manhattan street for a $200,000 ransom.

Work began on a blocks-long parking lot behind the retail shops on the north side of Main between Eliza and North Chestnut streets.

A five-hour search for an eagle’s nest on Mount Beacon turned up no signs of the birds. The state was alerted to the possibility of a nest by an opponent of a plan by a mining company to remove 52 million tons of bedrock from the eastern face of Fishkill Ridge over 150 years.

Beacon High School began its second season of varsity football after the program had been disbanded for several years because of a lack of players. The Bulldogs finished 0-8 in their first season back but Athletic Director Eric Romanino said he felt the program was now at a turning point.

After completing the 18th Dutchess County Classic, Eric Rizzo of Fairfield, Connecticut, proposed to his girlfriend, Cindy Stella of Beacon, who accepted. Rizzo carried the ring with him during the marathon.

Chris Bodor, 29, who wrote poetry to pass the time during his daily commute to Grand Central Station, published an e-book collection called Train of Thought.