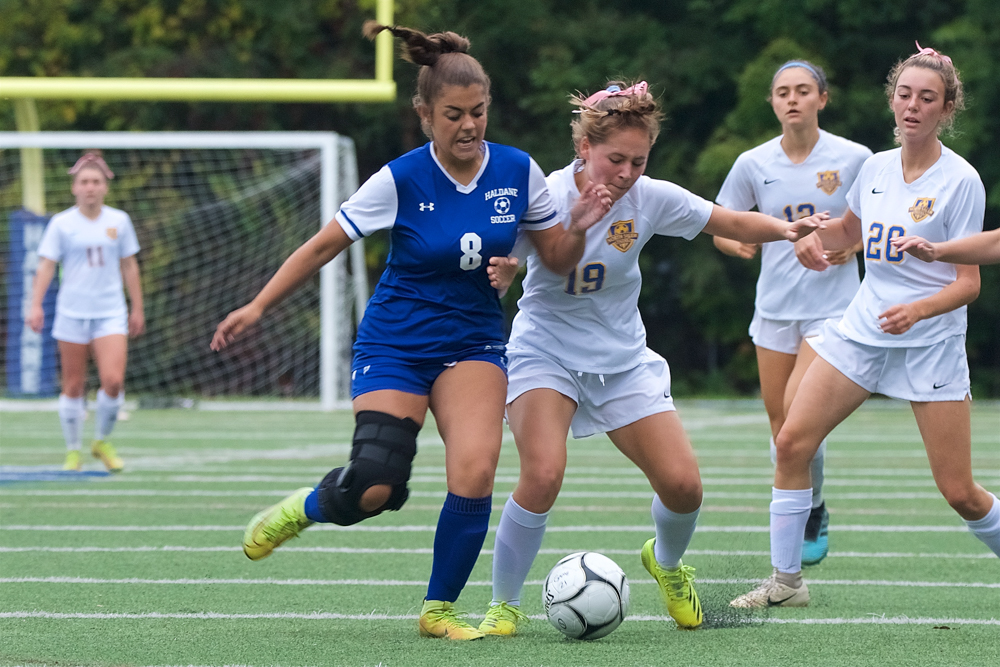 “I thought we played a great second half,” said Coach Mike Lentini, noting that North Salem scored only once after halftime. “We’ve overcome a lot of obstacles this season, and we’re playing well at the right time, before the sectional tournament. Our seniors — Bianca, Madison Chiera, Mazzie Maxwell and Katie Shields — have been stepping up.” 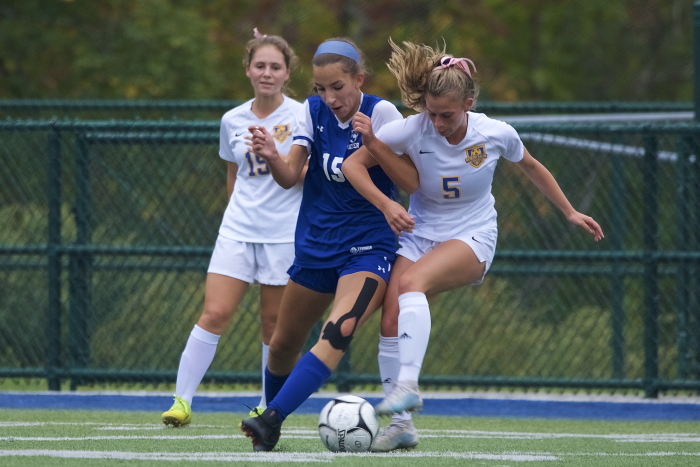 In Saturday’s win at Putnam Valley, Chiera scored a pair of goals and Ashburn and Sara Ferreira each had one. Poses had six saves.

The Blue Devils (5-6-1) are scheduled to host Arlington today (Oct. 8) for homecoming before visiting Croton-Harmon on Tuesday.

Beacon played a stingy Port Jervis team to a 2-2 tie on Tuesday. The Bulldogs trailed 1-0 at the half but in the 66th minute Devyn Kelly dribbled through three defenders and set up Chelsea DerBoghossian to tie it.

Five minutes later Sara Gonzalez put in a free kick from 30 yards out to give Beacon a 2-1 lead. Port Jervis tied the game with six minutes left in regulation, but neither team could score in the overtime period. Hope Cleveringa and Kelly combined for five saves in goal.

“I was happy with the girls’ effort,” said Coach Hugo Alzate. “But we didn’t finish our chances, and that’s something that you can’t allow come October.”

Beacon (5-3-2) will travel to Monticello today and Cornwall on Monday.

Beacon’s boys’ soccer team took care of business early on Wednesday (Oct. 6) against visiting Port Jervis, scoring four goals in less than 10 minutes on the way to an 8-0 win. 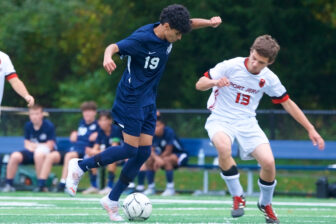 The victory was Coach Craig Seaman’s 200th career win. The Bulldogs, who this week are ranked No. 9 in Class A by the New York State Sportswriters Association, had to settle for 3-3 overtime tie last week at Goshen.

On Wednesday, Dillon Kelly had two goals and Miguel Ruiz, Andre Alzate, Liam Murphy, Kirk Dyer, Alex Wyant and Yahya Ouildane each had one. The defense did not allow a shot on goal. 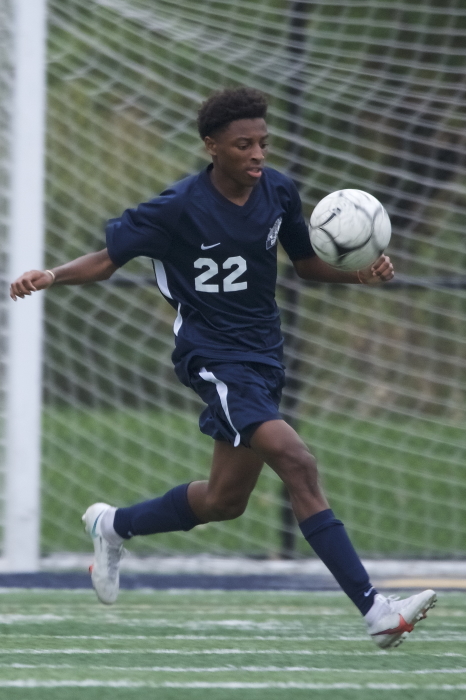 Things didn’t go as easily at Goshen, with goals from Kelly, Dyer and Chase Green. A.J. Lucas had six saves in net.

“Goshen was fired up,” Seaman said. “They’re a deep team. We were a little unlucky. We had a goal in overtime called back [for offsides]. That was a tough call, but it’s all about how we respond.”

He noted that, starting Monday (Oct.11), the Bulldogs will play seven games in 11 days. “That will be a busy finish,” he said. “The next two weeks will tell us a lot.”

Beacon (7-1-1) is scheduled next week to travel to Byram Hills and Washingtonville before hosting Minisink Valley.

Haldane defeated Tuckahoe, 1-0, on Oct. 2 on the road behind a goal by Ryan Eng-Wong. Ronan Kiter had two saves for the Blue Devils (4-7-1).

Haldane also won against Putnam Valley, 4-0, on Monday, with two goals from Eng-Wong and scores by Max Westphal and Matt Nachamkin. Kiter and Scott Bailey each had three saves at goal.

The Blue Devils were scheduled to host Croton-Harmon on Thursday (Oct. 7) and will play North Salem on Saturday at 2 p.m. for homecoming before traveling to Pawling on Wednesday (Oct. 13).

“We made too many mistakes, but were able to persevere,” he said. “There’s always some extra motivation when you play a team on their homecoming.”

Quarterback Jason Komisar ran nine times for 107 yards and scored two touchdowns, while Ahmir Bell had a rushing TD and Isaac Hansen ran for 67 yards and a TD on 13 carries. On defense, Sam Lunsford had an interception and Dan Urbanak had a fumble recovery.

Select Haldane games are broadcast online at bit.ly/haldane-stream and select Beacon games at nfhsnetwork.com or through links at beaconk12.org/athletics.

Evan Giachinta (75 yards on 16 carries) scored on a four-yard run for a 6-0 lead, and Julian Forcello caught a 79-yard pass from Ryan Van Tassel in the second quarter for a 12-7 lead.

Trailing 13-12 in the fourth, Van Tassel (12-of-23 for 183 yards and two TDs) and Giachinta connected on a 17-yard TD pass to take the lead. On defense, Giancarlo Carone and Tommy Tucker each had an interception.

“That was a huge win,” Coach Ryan McConville said. “We got a big stop on a fourth down, forced a turnover and marched 53 yards for the winning score.”

The Blue Devils will host Croton-Harmon at 7 p.m. today (Oct. 8) for homecoming.

At the Section I, Conference 3 championships at Woodlands High School on Sept. 30, the combined Haldane girls’ and boys’ team won the Best Overall trophy with a strong second-place by the girls and a fourth from the boys. 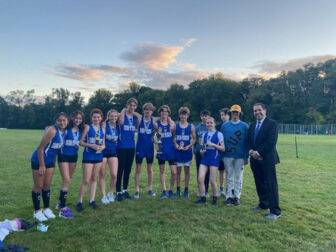 Each team was allowed to award two standout-performer trophies and Haldane gave the honors to Shanahan and Jackson Twoguns.

“Despite our setter [Meghan Tomann] sitting out with an injury, the girls fought a tough game,” Coach Kristina Roling said. “Our focus this week is to get everyone healthy.”

The team is set to host Putnam Valley today (Oct. 8) for homecoming.

The Beacon High School girls’ swim team has struggled this season, with just one win on Sept. 23 against Marlboro, 85-80. In the squad’s most recent meet, it fell at Kingston, 106-62.

Top individual performers included sophomore Meara Kumar, who was second in the 100-meter butterfly in 1:11.64; freshman Saniyah Wiltshire, who won the 100 backstroke in 1:13.25; and sophomore Isabella Haydt, who was first in the 100 breaststroke in 1:22.18.

Next week, the Bulldogs will host Warwick and travel to Middletown.