No light bulb went off when Gloria Gilbert Stoga got the idea to launch Puppies Behind Bars, a program through which inmates train service dogs.

“There was no ‘a-ha moment,’ ” she says. “I had read about it in the state of Florida [where a veterinarian had launched a similar program] and thought it was a brilliant idea.” 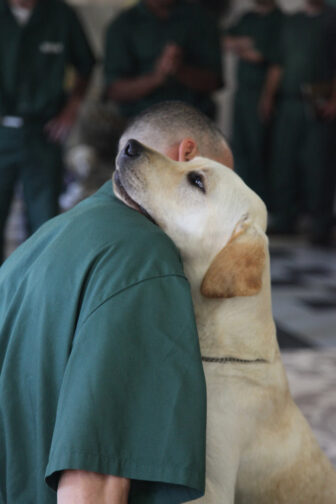 A prisoner works with his charge. (Photo provided)

When she started the program 25 years ago, Gilbert Stoga had no experience with prisons, and her knowledge of dogs was limited to being a pet owner.

Today, six Puppies Behind Bars staff members instruct about 140 inmate puppy trainers in five New York prisons and one in New Jersey. When the dogs are about 2 years old, they are provided to wounded veterans, first responders and law enforcement agencies that train them to detect explosives.

More than 3,000 inmates have taken part, Gilbert Stoga said, and about half of those who begin the program complete it. More than 2,000 puppies have been trained, with about 75 percent of them going on the become service dogs. (Canines that don’t “graduate” are adopted as pets.)

“Because all of our dogs are raised in prison, they have developed an empathy and responsiveness to humans which we have never seen in any other dogs,” Puppies Behind Bars tell visitors to its website at puppiesbehindbars.com. “Our dogs live in prison with ‘puppy raisers,’ who are people who generally feel vulnerable and emotionally fragile. Our dogs learn, instinctively, to help people who need them.”

Pups enter prison when they are eight weeks old and live with their handlers for about 24 months. “The program only uses Labrador retrievers,” Gilbert Stoga said, noting that male and female dogs perform equally well.

“I love working with the incarcerated individuals,” she said. “I like their willingness to learn and their eagerness to do something positive.”

Tom Mailey, a representative for the state prison system, said the success of Puppies Behind Bars was “multi-layered.”

“Part of our mission is to prepare individuals for their transition back to the community,” he said. “PBB incentivizes good behavior and gives inmates the opportunity to do something positive for someone else, while learning patience, pride and accomplishment.”

Inmates who remain in the program for the full two years it takes to train a pup, and who meet other criteria such as having no serious disciplinary infractions, can have six months taken off their sentences. Because the cost of keeping someone in prison is about $60,000 annually, that can be a savings for taxpayers, Mailey said.

One inmate, Ron (the program asks that last names not be used), said Puppies Behind Bars provided him with “an opportunity to be more than just a number, to become a person again.” Adam said, “I am finally, after 20 years of incarceration, able to give back.” Jazzmin said it “represents hope and second chances.”