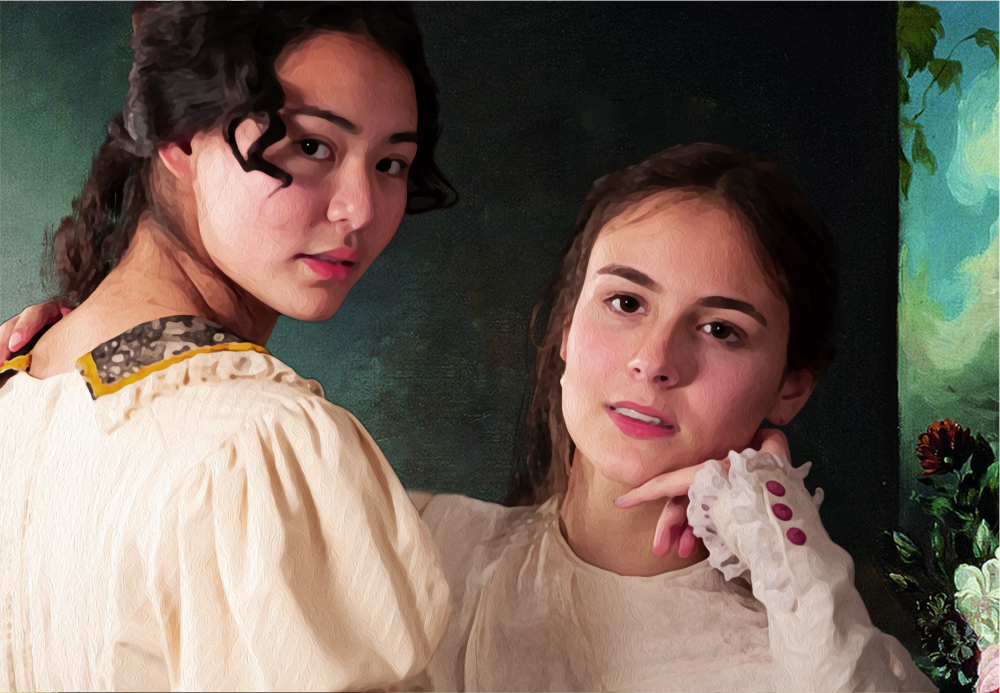 Maya Gelber and Jaclyn Landolfi are Elinor and Marianne in one of the two Haldane casts that will perform "Sense and Sensibility." (Photos by Jim Mechalakos)

Asked how the 19th-century personality she portrays in the upcoming Haldane Drama production of Sense and Sensibility might fit in at Haldane High School if she were instead a modern-day student, Rose LaBarbera is quick to reply:

“She would fit in with the theater kids,” says LaBarbera, who will portray Mrs. Jennings. “She would be a part of Drama Club, because she is a drama queen! I have a feeling she would also be president of the Chess Club.”

That a 2021 teenager has no difficulty transposing someone from 1811, when Jane Austen’s novel was published, speaks to the author’s seemingly timeless grasp of human behavior.

Director Martha Mechalakos says she selected the Austen adaptation (by Kate Hamill in 2016) as the fall production — after presenting Pride and Prejudice five years ago — because “Ms. Austen was very forward-thinking. Her female protagonists are independent, smart, funny, fearless and at times make difficult choices. They routinely turn down proposals for lack of love and affection — something that in her time would rarely happen. Her characters, even minor ones, are genuine, portrayed with all of their flaws. Through them, she addresses issues of morality, money, religion, class, snobbery, family dysfunction and especially women’s independence or lack thereof.” 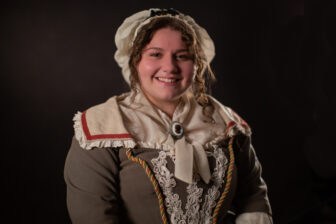 Rose LaBarbera will perform in “Sense and Sensibility” beginning Dec. 3

The cast agrees, saying they have found much to connect with in this story of two sisters: Elinor, the older one, a master of tact and acceptance in the name of honor and duty, and Marianne, who wears her heart on her sleeve and hasn’t figured out how to temper her emotional openness.

The production is double-cast to allow more students to participate. Maya Gelber, one of the two Elinors, was asked why she thought Austen keeps getting rediscovered, generation after generation. “It has all to do with the fundamental connections her work continues to have with the human experience,” she says. “Elinor and Marianne, although somewhat opposites, have an undeniable sibling connection that endures through all the challenges of growing up. The human experience is making and maintaining the connections that matter to us the most while still having room to change and grow, and Jane Austen masters such dynamics.”

For Chloe Rowe, the other Elinor, the challenge has been playing someone unlike herself. “I can be more of a ‘sensibility’ person because I can get easily led by my emotions,” she says. “This is something Elinor and I don’t have in common, so it’s been interesting to play a role from the ‘sense’ perspective.” 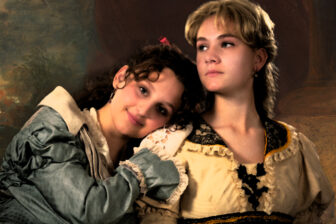 Sophie Sabin and Chloe Rowe are Marianne and Elinor in one of two casts.

That’s emphatically not the case for either Marianne. Sophie Sabin, evidently a Marianne on and off stage, enthuses: “I am sensibility, all the way! I am Marianne, after all! I feel things so much; I see a lot of myself in Marianne and I love that I can play an animated version of myself onstage.”

Her fellow Marianne, Jacklyn Landolfi, concurs, saying she “would consider myself to be far more of a ‘sensibility’ person. Much like Marianne, my emotions consume me and my life is guided by them. I can relate to this part of her. I am often considered overly emotional and to be driven by my heart, not my head.”

For those who presume the production might be drawing-room staid and stuffy,  Gelber says that’s not the case. “It’s easy to get caught up in the idea that because the show is a period piece, it’ll be boring and hard to follow. But people of all ages are helping breathe life into this show, offering different perspectives and creating a vivid — and funny — display of human emotion.”

Rowe says to expect some laughs courtesy of physical comedy: “There are a lot of awkward pauses and glances, which has been a fun thing to play around with as we work on the scenes.”