The only thing missing from Cold Spring Aglow, the annual Chamber of Commerce holiday event, was the glow.

Scheduled to take place on Friday evening (Dec. 10), the event was to include 600 lit candles in white paper bags lining Main Street sidewalks from the traffic light to the river. Shops stayed open late for shoppers, and carolers added to the festive spirit. The weather was perfect.

But on Friday afternoon, confusion reigned. At 2:24 p.m., the Village of Cold Spring announced by email that the event had been postponed to Sunday. At 3:37 p.m., it sent a second email saying that only the luminaria had been postponed.

By the 5 p.m. start, Main Street was filled with shoppers and carolers had assembled at the waterfront. But the question on the street was, “What happened to the candles?” 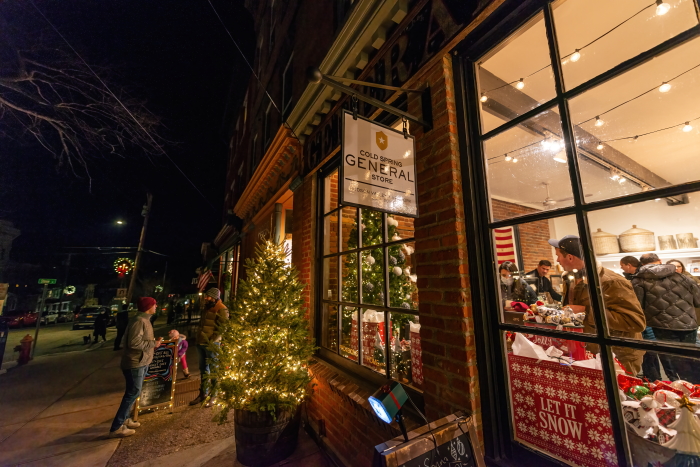 There were no candles, but merchants stayed open late during Cold Spring Aglow. (Photo by Damian McDonald)

At the Tuesday (Dec. 14) meeting of the Village Board, Mayor Kathleen Foley explained that Officer-in-Charge Larry Burke had “raised concerns about the fire risk and what had been inadequate communications with the fire company,” which happened to be holding its annual holiday party that night at Riverview.

A representative from the fire company said that the North Highlands fire department was aware of the party and would have been dispatched if needed.

“Officer Burke and I did make the call to ask the chamber to reschedule the luminaria until Sunday,” Foley said at the Tuesday meeting. “This was not a failing on the part of the chamber or the fire company.”

Foley said the communications breakdown was at Village Hall, “with poor follow-up from the time [the event] was approved” on Oct. 19.

Unlike larger events held at Mayor’s Park, which require an extensive application form, details about Aglow were neither requested by the board nor provided by the Chamber.

“Public safety has to be the primary job for all of us,” Foley said. “As uncomfortable and difficult as the decision was, the officer-in-charge and I felt it was the right one to make.” 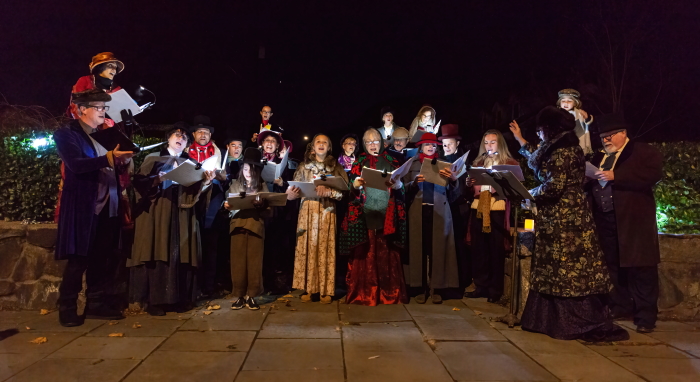 Carolers organized by the Philipstown Depot Theatre sang at the waterfront. (Photo by Damian McDonald)

On Tuesday Foley also reinstated Chamber of Commerce reports at the Village Board’s monthly meetings, a practice that had been discontinued. “That eliminated an essential communications pathway for chamber events,” she said.

Nat Prentice, who became acting chamber president when Eliza Starbuck resigned to successfully run for a seat on the Village Board, supported Foley’s measures to improve communications and said a report on Aglow had already been submitted to Village Hall.

The report, which was provided to The Current, underlined the resentment felt by chamber members at the sudden cancellation, saying “haphazard and untimely communication, especially the mass email sent by the village hours before the event, caused frustration among merchants, disappointment among community members, and damage to the chamber’s credibility.”

It pointed out that Aglow is the only holiday event the chamber organizes for merchants and that “the last-minute chaos and confusion frankly made us look disorganized, through no fault of our own.”

Despite the confusion, the chambers said the event raised $2,250 for the Philipstown Food Pantry.

■ Donald MacDonald, an architect and the project manager for the ongoing restoration of the stone wall on Main Street between B and Orchard streets, reported that more stone was needed, and that 30 more feet needed repair, adding about $25,000 to the $87,000 cost. MacDonald said the contractor would pay to fix a sewer line damaged during excavation. MacDonald said former Mayor Dave Merandy “was invaluable in moving the project forward” and Foley said it would be “a great monument to his time leading the village.” 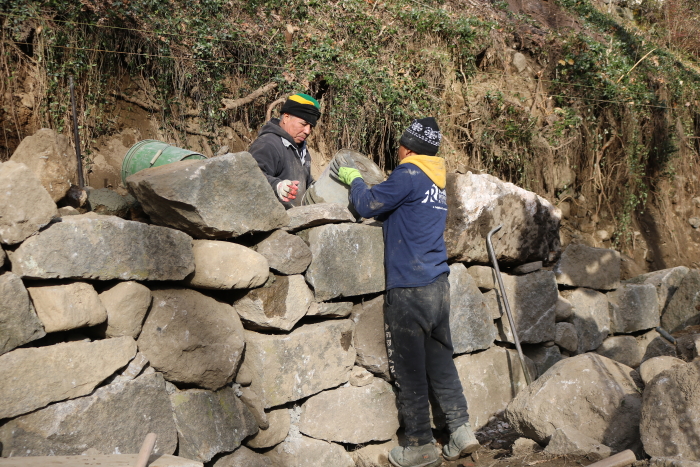 Stonemasons are rebuilding a wall on Main Street. (Photo by M. Turton)

■ The board approved seven parking waivers, at $250 each, for the storefront at 40 Main St., the former site of the Ellen Hayden Gallery. The rear of the building will include 37 office work stations; parking for those employees will be provided at the two municipal lots on Fair Street, adjacent to Riverview Restaurant and at Mayor’s Park, contingent upon the village and the building owner agreeing on an annual fee per space.

■ Code Enforcement Officer Charlotte Mountain reported that she completed satisfactory inspections for three of four applications for short-term rental operations. One applicant did not meet the three-year ownership requirement. Foley noted that the STR law goes into effect on Jan. 1 and that in the new year the board will examine ways to improve and clarify the regulation while simplifying compliance.

■ Sean Conway, vice-chair of the Historic District Review Board, reviewed details of the reformatted district map that updates a 1999 version. The map incorporates the national and local historic districts and is more user friendly, identifying properties by street address rather than tax lot. While the 1999 map depicted district boundaries that sometimes split an individual lot or structure, the update delineates all boundaries as running along existing lot lines. The Village Board now has 62 days to adopt the map. No building permits will be issued until then. The Putnam County Geographic Information Services office assisted.

■ Robert Downey Jr., crew chief at the Highway Department, reported it had collected 56.29 tons of trash and 20.21 tons of recyclables in November. He reminded residents not to blow leaves onto village roads, to refrain from using Main Street trash cans for household garbage and that roadside snowbanks are not safe for children to play on.

■ The Cold Spring Police Department answered 71 calls for service last month, and officers issued 41 parking and 12 traffic tickets. Officer-in-Charge Larry Burke noted a recent uptick in false alarms, especially at the NewYork-Presbyterian medical building at Butterfield, which has had 66 in the past year. He has asked the building inspector to investigate and possibly issue a fine since the alarms have been an ongoing problem that has not been corrected. Burke also advised residents who want to tip highway workers at Christmas to do so directly or drop it off at Village Hall. In the past, he said, tips taped to garbage cans have been removed and that theft is difficult to prove. He also reminded residents to lock their cars, noting night time break-ins have continued.

■ The Recreation Commission submitted, for Village Board review, application forms and fee schedules for events held in village parks, as well as a job description for an event coordinator to be hired by the village.

■ Nancy Montgomery, who represents District 1, which includes Cold Spring, on the Putnam County Legislature, made the first of what is expected to be monthly reports to the board. She said on the previous evening she spoke against a resolution proposed by the Legislature’s Health Committee opposing any government mandates for COVID-19 vaccination. She also said it was “very disappointing” to go to the North Highlands Fire Department for the fire district vote on Monday to find that “fire department representatives weren’t even masked. We do have a mask mandate.”

■ Philipstown Town Board member Bob Flaherty reported that a well drilled to a depth of 960 feet did not produce enough water to alleviate the shortage at Garrison’s Landing. The water district is considering a second drilling site and the possibility of running a water line from the town Recreation Center to the water plant, a distance of more than a mile. The district recently increased its water storage capacity by 5,000 gallons.

■ The board honored Richard Shea, passing a resolution commending him for his service to the community as a Philipstown Town Board member since 2001 and as supervisor since 2009.

■ The board also honored Travis Fyfe, who was recently named Cold Spring Fire Co.’s Firefighter of the Year.