Beacon pulled out a 51-49 victory on Wednesday (Feb. 9) at home over Cornwall Central, which surged in the fourth quarter but never managed to take a lead.

The Bulldogs led 34-25 at halftime and 46-36 at the end of three quarters. But Cornwall pulled closer in the fourth, forcing Beacon to make some big plays.

“We had some good moments, but in the fourth quarter Cornwall played great,” said Coach Scott Timpano. “They got some easy baskets, and we struggled to score. But we did just enough at the end defensively to thwart a comeback.

“Jason Komisar had a tremendous block for us that got us the ball back, a potential game-saver. He also had a huge rebound. Darien Gillins had four 3-pointers in the first quarter that were big, and Joe Battle had six straight points in the second that were a great burst of energy for us.”

Gillins led the scoring for Beacon with 12 points, and Battle added 10.

On Feb. 3, Battle recorded 13 points and seven rebounds, and Gillins added 12 points, in a 63-42 victory over Minisink Valley. Jack Philipbar, Jamel Sellers-Blackwell and Chase Green each had eight points.

The Bulldogs led 20-14 at halftime and then scored 41 points in the third and fourth quarters to pull away.

On Saturday (Feb. 5) at Monticello, Beacon had one of its slowest starts of the season, scoring only three points in the first quarter in a 60-55 loss. Green led the scoring for the Bulldogs with 12 points.

Beacon (10-5) has three games remaining in the regular season: The Bulldogs are scheduled to host Goshen at 6:30 p.m. today (Feb. 11), visit Goshen on Tuesday and visit O’Neill on Thursday. The Section IX playoffs begin Feb. 26.

After losing by 22 points to Haldane in its own gym a week ago, North Salem was determined to give a better showing in Cold Spring on Wednesday (Feb. 9). But it had no answer for a more talented Blue Devils team, which controlled the boards on its way to a 62-54 victory. 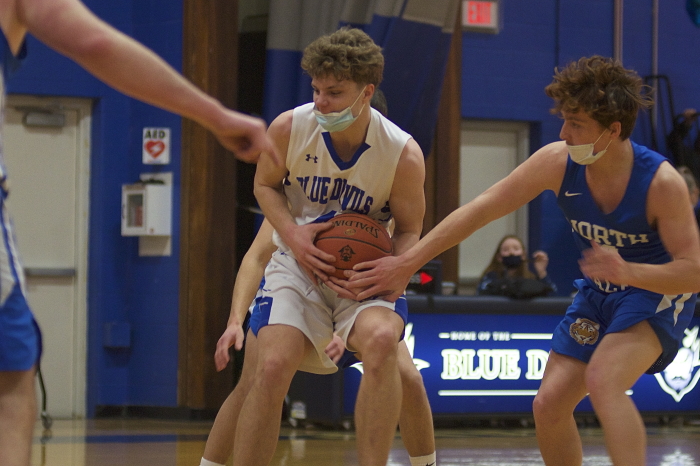 Soren Holmbo fights to hang onto the ball as a North Salem player reaches in. (Photo by S. Pearlman)

“North Salem was on a mission and shot well and out-rebounded us in the first half,” said Coach Joe Virgadamo. “We moved the ball well in the fourth quarter, and good things happened.”

Ryan Irwin led Haldane with 21 points, followed by Matteo Cervone (18), Rob Viggiano (9) and Soren Holmbo (8). “Matt Nachamkin and Will Bradley both gave us good minutes off the bench,” Virgadamo said.

“We want a shot at Alexander Hamilton and that gold ball,” Virgadamo said. “We can’t look past Leffell, but we’ve been wanting this since [the season began on] Nov. 15 — that’s the goal.”

“We came out fast,” said Coach Jessica Perrone. “We focused on getting points in the paint instead of living by the three. We were very successful scoring in the paint. Camilla stood out for her strong defense, sticking to a Spackenkill player we know is a lights-out three-point shooter.”

On Feb. 3, the Blue Devils were on the short end of a 42-37 score at Valhalla. The Vikings led 20-19 at halftime. Chiera had 20 points, six rebounds and three steals, and McDaniel added six points. “We took good shots that weren’t falling, and we adjusted well offensively to find open looks against a tight defense,” Perrone said.

Haldane (8-9) was scheduled to visit North Salem on Thursday (Feb. 10), visit Westlake today (Feb. 11) and host Putnam Valley in the regular-season finale at 4:30 p.m. on Monday.

Beacon took a 49-30 defeat at the hands of Cornwall on Tuesday on the road. Reilly Landisi scored 11 points and Rayana Taylor had six.

“Going into halftime we were down four but got outscored 20-5 in the third, which was eventually our downfall,” said Coach Christina Dahl. “I thought we played fantastic defense in the first half, but we didn’t come out with the same intensity in the third. That, and missing easy opportunities, and turnovers, hurt us.”

Beacon (7-8) is scheduled to play three games in three days next week: It will host Monticello at 5 p.m. on Monday and Goshen at 4:30 p.m. on Tuesday before traveling to Minisink Valley.

Beacon, which finished its regular season last week with a 2-9-1 record, placed eighth at the Orange and Ulster counties championships held Feb. 3 at Valley Central High School in Orange County.

The individual medley relay team of Imroz Ali, Bryce Manning, Ronnie Anzovino and Hunter Ingold was ninth in 2:03.27, and Ingold finished ninth in the 50-meter freestyle in 24.36.

The Section IX swimming and diving championships are scheduled for Thursday (Feb. 17) at Valley Central.