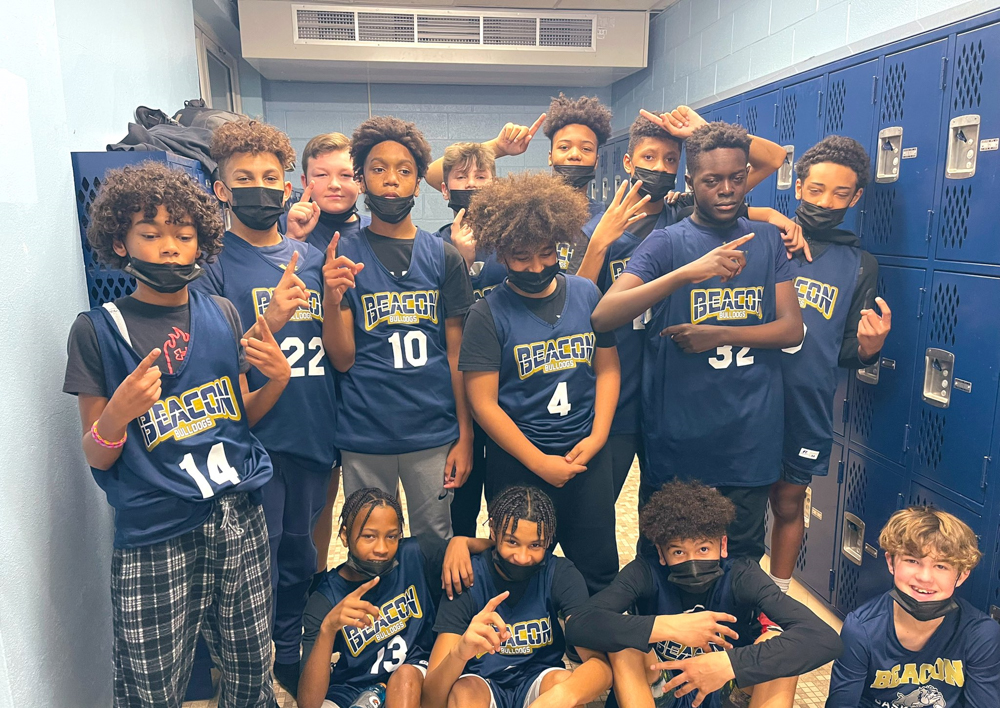 The Beacon modified boys' basketball team finished its season without a loss.

“Goshen has a little bit of everything, and is one of the tallest teams,” said Coach Scott Timpano of the Gladiators (14-2; 9-0 league). “They have three starters over 6-4 and a 6-7 kid coming off the bench. But we played them better the second time around, and the way to get better is by playing better teams.” 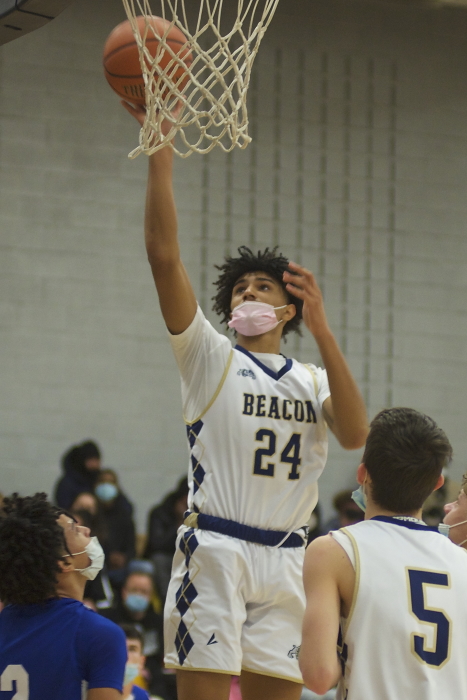 The Bulldogs led, 35-32, before Goshen took over in the second half.

On Feb. 11, it was a seven-point game at halftime before Goshen pulled away. “They went into another gear,” Timpano said. Gillins and Komisar each scored eight points.

Beacon (11-8) was scheduled to finish its regular season on Thursday (Feb. 17) at James O’Neill, and is hoping for a home playoff game when the Section IX, Class A tournament begins next weekend.

“It’s always exciting when you hit postseason play,” Timpano said. “We’ve seen some crazy things in the past. We’re just excited to play in a true postseason again [after a regional tournament was held last year because of COVID restrictions]. We’ve seen most of the teams in the section, and we just want a shot. Just to play a little more basketball — that’s all you can ask for.”

Beacon has reinforcements on the way: Its modified team of seventh- and eighth-graders finished the season undefeated. “What an incredible ride this season has been with this team,” said Coach Thomas Zehner. “Going 13-0 is not an easy feat and they made it look that way. I’m excited for what the future holds for this group.” 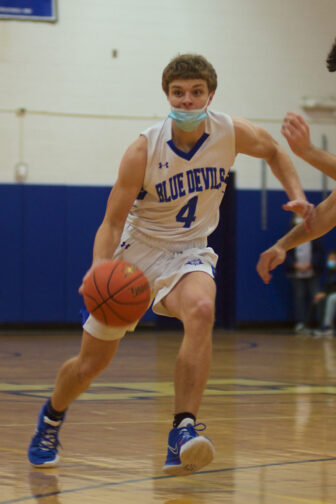 The Blue Devils returned to the New York State Sportswriters Association rankings this week at No. 5 among Class C teams.

Reilly Landisi had 20 points in the victory over Goshen, while Shadaya Fryar added eight and Rayana Taylor had seven. The Bulldogs had lost at Goshen, 36-31, on Jan. 6.

“After losing to Goshen at their place last month, we came out with a game plan and executed it,” said Coach Christina Dahl. “We were able to manage the game defensively, holding them to eight second-half points.”

Against O’Neill, Landisi had 10, Lila Burke added nine and Devyn Kelly had eight. “We got a strong defensive effort from Daveya Rodriguez (nine rebounds); she caused havoc with her length,” Dahl said. “Offensively, Lila Burke came in and gave us great minutes.”

Beacon (11-8) is scheduled to travel to Spackenkill on Wednesday (Feb. 23) and then will await its seeding in the Section IX playoffs. 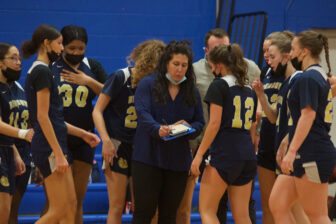 In other news, Lauren Schetter, a 2017 Beacon grad who is in her fifth season playing for Pace University, had a career night on Feb. 5, scoring 33 points for the Setters (19-5) in a win at The College of Saint Rose in Albany.

The Haldane team — the seven-time defending Section I, Class C champions — has had an up-and-down winter. Despite a losing record (9-11), Coach Jessica Perrone and the Blue Devils feel they’ve been playing well, growing and are carrying positive momentum into next week’s sectional tournament.

Seeded No. 3, Haldane will play March 1 on the road against No. 2 Yonkers Montessori Academy (12-8) in the Section I playoffs. The Blue Devils beat YMA by seven points early in the season. The winner will advance to the championship game on March 5.  Haldane and Hamilton (9-11) tied for the No. 3 seed but the Blue Devils won the tiebreaker because they had defeated Hamilton on Dec. 7, 62-26. The No. 1 seed is Tuckahoe (16-4).

“We know we beat Yonkers, but we need to set the tone from the beginning,” said Perrone. “The girls feel good about where we are.”

Is the team feeling the pressure of being seven-time champions? “It’s in their heads,” Perrone said. “No one wants to be the team that breaks that streak. But I’d rather have the streak than not have it, and hopefully it’s a good kind of motivating pressure.”

At North Salem, Haldane played well defensively, recording 16 steals. The team got 15 points and five rebounds from Molly Siegel, and nine points, 10 rebounds and five steals from Mairead O’Hara. The Blue Devils had lost on Feb. 2 to North Salem at home by two points.

Beacon competed at the Section IX divisional championships at the Ocean Breeze Athletic Complex on Staten Island on Feb. 12. The boys finished second and the girls were fourth.

The Bulldogs had two individual champions: sophomore Kyla Richardson won the girls’ 55-meter dash in 7.72 seconds and senior Sal Migliore took the boys’ 600 meters in 1:24.95. His time was the fastest in any division and ranked him No. 1 in Section IX headed into the state qualifiers on Feb. 26 at The Armory in New York City.

“I was excited to see Kyla drop a few more hundredths off her personal best,” said Coach Jim Henry. “This is her first indoor track season, and there are plenty of technical things to work with her on. It’s possible that she becomes one of the section’s top sprinters over the next two years.

“Sal’s race was one of the two best 600-meter races I’ve seen out of a Beacon runner,” Henry added. “He positioned himself beautifully, ran a wise tactical race, and finished strong. It’s great to see kids put together their best efforts at this point in the season.”

Lou DelBianco, at 215 pounds, finished fifth in Division II at the Section IX tournament on Feb. 12 by defeating Chris Betcher of Wallkill. DelBianco had defeated wrestlers from Monroe-Woodbury and Cornwall earlier but lost to Ethan Gallo of Middletown, the eventual champion.