Would develop popular corner on west end of Main

A development proposal for Main Street in Beacon, shelved since 2019, is back.

First submitted to the Planning Board about four months before the pandemic shutdown, the 2 Cross St. project called for integrating the building at 172 Main St. and the brick building at 4 Cross St. with new construction and an undeveloped lot that sits between the buildings.

On Main Street, developer Joe Donovan wanted to construct a four-story building with retail on the ground floor, nine units of affordable senior housing on the second and around 10,000 square feet of office space on the top two floors. The back side of the complex, on Cross Street, was to be three floors. A portion of the undeveloped lot, which has been used in recent years by the Green Teen gardening program, would remain as a park.

The development returned to the Planning Board this week and, citing previous comments from city officials and market changes, now proposes a three-story building enveloping much of the corner of Main and Cross. It would include retail on the street level and 18 apartments for seniors, split evenly between market-rate and below-market-rate, on the top two floors. The building will be constructed using energy-efficient “passive” design standards, including a green roof.

172 Main St., the current home of RonzWorld Guitars and part of the city’s historic district, will retain its facade and be integrated into the new building, according to materials submitted to the board, while 4 Cross St. will be demolished and replaced with new construction. A much smaller, paved, publicly accessible “plaza” at the corner of Main and Cross will remain.

A rendering of the proposed building, looking north from opposite Main Street (Hudson Todd LLC)

The project will provide 19 of 27 required parking spaces — two behind the building, eight in a lot at 10 Cross St. and nine more in a public parking lot at 152 Main St. Planning Board members, however, on Tuesday recommended that the developer conduct a parking study to determine whether the two lots are routinely available.

The board members also warned project officials that their proposal may not be popular. Board Chair John Gunn recalled walking through the community garden space with his daughters, and how proud they were of growing strawberries there.

“You will see a visceral response; I need you to be prepared for that,” he said. 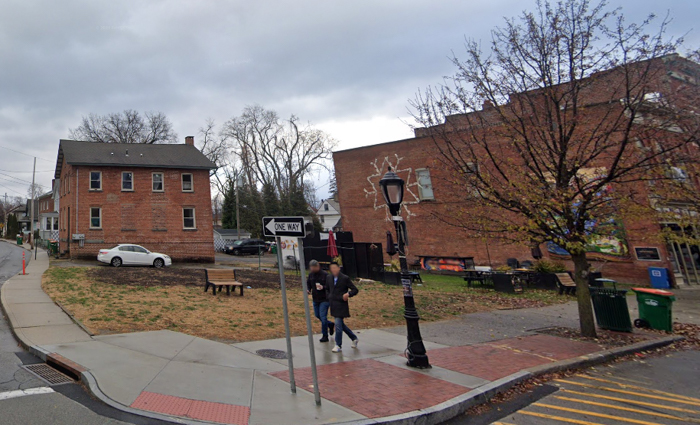 The corner as it appears now

“The area fills with people,” added Board Member Len Warner. “It’s probably the most joyous, crowded area in warm weather on a Second Saturday. It is a magical neighborhood.”

Gunn also said he hopes the design for the proposed building can be improved. “This building could be in any other similar city elsewhere in the United States,” he said. “There’s nothing distinguishable about it.”

The Planning Board continued its review of plans to convert the former Reformed Church of Beacon on Route 9D into a 350-person capacity event space with restaurant and bar but only 32 of the required 136 parking spaces.

Project officials on Tuesday said they’d removed a proposed loop driveway in front of the church and will instead use a two-way “main” driveway along with a one-way, exit-only driveway connecting to the parking area behind the proposed hotel. Planning Board members liked those changes, although they said they’d prefer to see the two driveways simplified to one way in, one way out.

But much of the discussion, as in previous meetings, was about parking.

Project officials have said they hope to make up the shortfall with a combination of nearby public lots, Beekman Street, the Metro-North station and perhaps an as-of-yet unapproved proposal to the City Council to restripe and add spaces to sections of Wolcott Avenue. The 30-room hotel planned for what had been the church’s parsonage and the event/restaurant space will not require parking at the same time of day, eliminating some of the need, said project attorney Taylor Palmer.

But “there’s a theoretical nature to what you’ve proposed that we have to look at closely, because we don’t want to be in the position of having to impose this potential burden on the city and its residents” if a parking lot that’s currently available, such as the 66-space city lot behind the Tompkins Hose Fire Station, is eventually developed, Gunn said. Planning consultant John Clarke also noted that the spaces on Beekman Street may be unavailable once commuters return to a more normal schedule on Metro-North.

Project officials said they expect the event space to reach its full capacity on “very limited occasions.” They also intend to install two dozen bike racks and encourage walking to and from the venue.

The Planning Board directed its attorney to begin drafting approval documents for the three-story mixed-use proposal at 364 Main St.

The developer is proposing retail on the ground floor and 20 apartments on the higher stories. Cars would enter the site through a narrow driveway on its east side and exit through a parking lot in the rear. An addition to the building would be set back on the west side with benches and landscaping in front of the red brick building.

On Tuesday, board members continued to express concern with the Main Street driveway to the building. It could create a hazard for pedestrians, but, if eliminated, would allow the developer to increase the landscaping and public space surrounding the building, they said.