Goats are having a bit of a moment. From jumping-goat videos online to fine cheeses, lawn maintenance and cozy sweaters, goats are considered by many people to be the GOAT (Greatest of All Time) when it comes to farm animals, putting cows and sheep out to pasture. 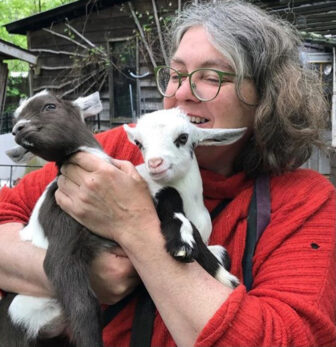 Lisa Knaus, who runs the ceramics studio at the Garrison Art Center, owns four goats and spend hours on many days walking with them. “They really relate to their people,” she says. An exhibit of her work about the animals, A Potter’s Life with Goats: Ceramics, Photographs, Goats and Eggs, opens at the Buster Levi Gallery in Cold Spring with a reception from 4 to 6 p.m. on April 2.

As a ceramicist, Knaus has apprenticed to and assisted many studio potters for decades, and now works from her own studio. After 25 years of traveling to craft fairs, she settled down and started teaching at the Garrison Art Center. This gave her more time to spend at home and allowed her to adopt goats — what she calls “a lifelong dream.” She has integrated growing food, throwing pots, caring for her goats and chickens and photographing them along the way.

One shot of Knaus with her goat Teardrop will fill a tall, narrow window at Buster Levi. Also featured are farm eggs in unusual colors and jars Knaus fashioned to hold goat cheese. “I can make jars all day,” she says. “I love the way the lids fit and how they contain something special.”

There are also vases in pale blue and white, and handmade, rough-hewn bricks made by Knaus from remnants of reclaimed clay and glaze wiped from buckets that she tossed aside while making her ceramics. She’s stacked them to simulate a part of a kiln. 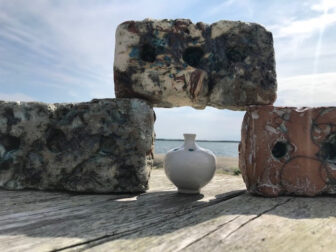 A vase and bricks made by Knaus

Knaus and her husband live near the Wallkill River. Around five years ago, her father suggested they get goats. “I had empty-nest syndrome,” she recalls. “I impulsively got two females, brought them home and found them to be a handful. They immediately became attached to me, so much so that I almost tried to find them another home.”

Deciding instead to increase their numbers, Knaus rented a male goat. “We wound up loving him so much that we wanted to keep him, but after five months, his farmer wanted him back,” she says. The females gave birth two weeks apart but, when one began attacking the other, they found a new home for one. The goat that stayed is Alma, and her kids, Teardrop and Nigel.

The baby goats were such lookers that Knaus increasingly devoted more time to capturing them in photos. Eventually, there were more goats than pottery on her Instagram account at lisaknauspottery.

Alma is a pygmy goat, a friendly breed originally from Nigeria. “They came down off the hills and were bred down to Nigerian dwarfs, which are bred for milk,” Knaus explains. “Alma has no milk, and she likes to sit down on her udders.” 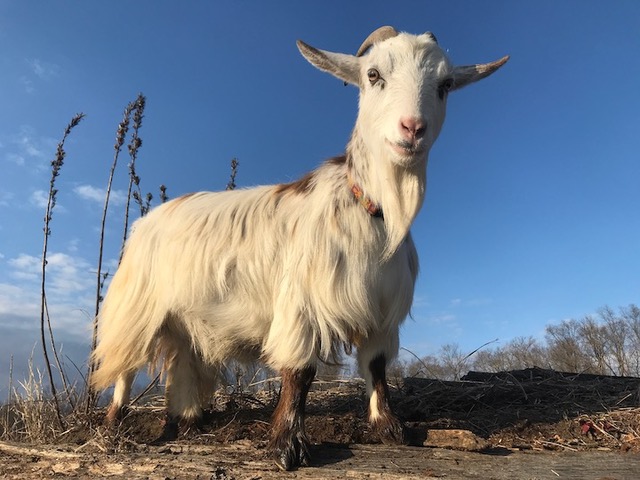 Knaus didn’t grow up on a farm; her parents were educators (her father taught high school art). Her mother said yes to any pet. “Chickens, ducks — I embraced that lifestyle,” Knaus recalls.

As an adult, she began again. “Four years ago, my husband raised a Canada goose, and, when she had one egg left [in the nest], we put it under one of our chickens,” she says. “It worked — call of the wild — we got another goose. This one rules the neighborhood, and eats the neighbor’s garden, but is sweet and never attacks people — she’s looking for a friend all the time.”

Amid all the animals — the couple also owns 10 chickens — it’s the goats that Knaus says bring the most connection.

“I had met many goats in my lifetime before I got them,” she says. “Once you live with them, you come to understand their beauty, their mythology, how they look into your eye and see into your soul. Goats have fascinating eyes; their pupils are horizontal, not vertical. They always make eye contact with me; it feels profound.

“I can’t imagine a goat farm where people have hundreds of goats because you’d have to remove yourself from sentimental thought or you’d never get anything done. The goats cry. They can be mournful, but they respond to calming. They’re in my thoughts all the time. They can look at me in a certain way and I know whether they need attention, food, a walk. 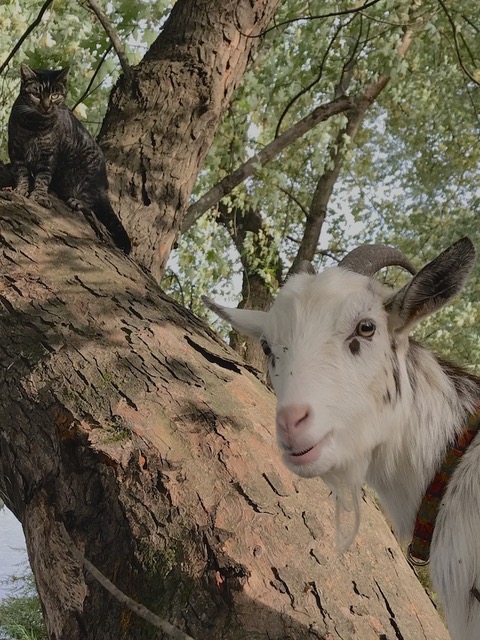 “Once, Teardrop needed to get away from Nigel, her brother. She stared at me and led me to a corner of the field. Milka is the smallest and she often gets bumped away. Then, she stares at me to say, ‘I need a treat now and not to be bothered when I eat it.’ My pygmy goats communicate with their horns. When they want me to feed or pet them, they stick their horns in me.”

Knaus says she wants with her art “to communicate how beautiful these animals are. They’re rarely aggressive; even an unneutered goat is pretty easygoing. They gravitate toward people in a way that is surprising to those who don’t know them. That’s probably how they got domesticated — it was so easy.”

The Buster Levi Gallery, at 121 Main St. in Cold Spring, is open from noon to 5 p.m. on Saturday and Sunday. See busterlevigallery.com. A Potter’s Life with Goats continues through May 1.