When Dirk Westphal headed to a public pool on a clear day in Freiburg, Germany, his family in tow, he had no idea that the excursion would inspire art.

His photographic series, Flying People aka Love note to Johnny B, is on view through April 25 at Artsy.com (bit.ly/westphal-show). Each of the 18 images captures a swimmer leaping from a 10-meter platform.

Westphal, who lives and works in Garrison, says the series, completed in 2021, pays homage to the late conceptual artist John Baldessari, who was among Westphal’s teachers at the California Institute of the Arts in Santa Clarita. The images themselves, taken with a mobile phone, are a tribute to one of Baldessari’s best-known series, Throwing Three Balls in the Air to Get a Straight Line (Best of Thirty-Six Attempts), from 1973.

Westphal emphasizes his affinity for vivid color and concept, both of which have been central to his work. He says they also reflect the joyful anarchy he experienced at the pool.

“I had no idea what I was in for — just going for a swim was exciting for us,” he recalls of the visit. “The diving board was completely unsupervised, with people jumping off in groups, having so much fun doing outrageous and dangerous behavior. It became a high point of the vacation. Looking at the images I took, later, I began to associate them with Southern California — there was something about that blue sky.” 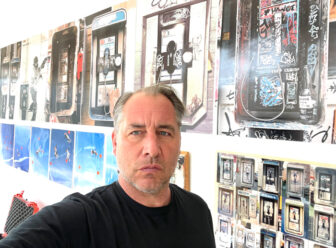 The sky framing the swimmers reminded Westphal of Throwing Three Balls, but he sensed there was more he could do. He decided to add “office dots” to the prints and photograph them, “throwing the viewer off-balance, further disorienting them and initiating a form of collaboration between the people, the balls and the sky.” It all fit squarely into a lineage of pattern and color focus, particularly after he rearranged the images.

As Westphal puts it, his work is most often a “playful exploration of the visually incongruous. What I primarily do in photography is come to terms with what’s happening, using different approaches to understanding. I had pretty fancy training in theory — Cal Arts has a reputation for that. I read and read all these ideas about art-making, but found there wasn’t much time to make art. I was intimidated, but found it to be an interesting place with wild stuff happening all over.”

After moving to New York City, Westphal became interested in performance art. “I lived on the corner of Broome and Center streets, big wide streets, old thoroughfares with tons of honking,” he says. “I knew I couldn’t win that fight, so I thought, ‘Maybe it’s time to embrace the noise.’ I made a symphony out of the honking and shot video. I also had a show in a mini-storage space with art made from stuff I found on the street, so they dovetailed.”

Another project came from drugstore observations.

“I’d stare at bottles and containers of mouthwash and tubes of toothpaste and think about the many meanings of, say, the color of toothpaste, how it’s designed to be put in the mouth, then spat out,” he says. “I love the idea of people out there trying to make things tempting for us, down to the names of nail polish. I started collecting them, finding them really photogenic. 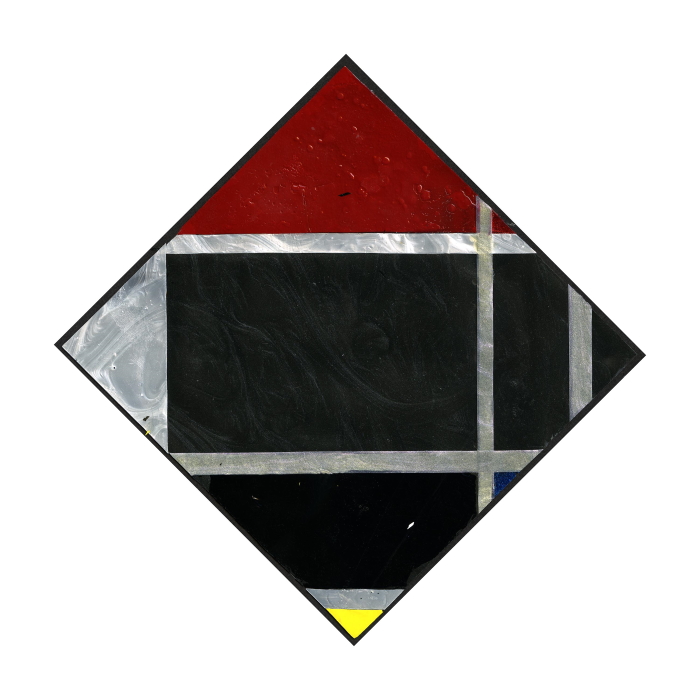 “Lozenge Composition with Red, Black,Blue and Yellow 1925 in Black aka Friar Friar Pants on Fire” (2011)

“I decided to ‘redo’ Mondrian’s paintings,” he says. “I collected many [nail-polish] colors, poured them out, used a ruler, cut them into strips and rearranged them in Mondrian’s shapes, proportions, colors. I was pointedly looking for shiny, fake things and recontextualizing; it’s a mission I’m still exploring.

“I get a lot of ‘Hmmm, your work is so interesting now that I’ve spoken to you,’ ” he says. “I’m OK with that. A friend planted a seed in my head: The artist should stand in front of his or her work and be able to talk to people, defend the work. Put yourself in front: It’s me, my work, I’m comfortable with it. You will learn stuff about how people perceive what you’re doing.”