If a portrait can commemorate a human life, how are other species presented? Not just documented, but honored? 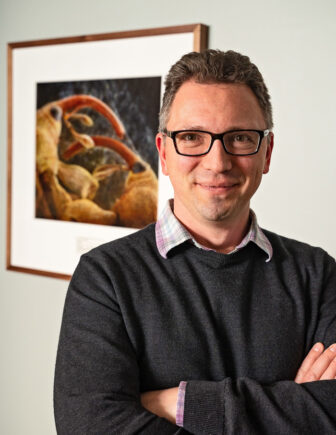 Photographer Daniel Kariko examines that concept with his series of photographs, Suburban Symbiosis, some of which will be shown at the Garage Gallery in Beacon as part of a show called Original Species that begins with a reception from 4 to 7 p.m. on Saturday (April 9).

Through a process of his own invention that involves two microscopes, Kariko captures insects and other arthropods — the kind that land on windshields or get dusted off shelves. In a nod to northern European Baroque painters, he then creates portraits that reflect his “fascination with how people think of nature as a collection.”

Kariko, a professor of fine art photography at the School of Arts and Design at East Carolina University, works largely in exploring connections between human relationships and the environment.

Some of his other projects — he usually works on several long-term studies concurrently — include surveying and documenting damage from Hurricane Ida, and, less broadly, photographing his family in Serbia, whom he left in 1994 at age 17. He was living in Thibodaux, Louisiana, while on a student exchange program and decided he wanted to stay in the U.S.

After enrolling at Nicholls State University in Louisiana, he shifted his focus from mechanical drafting to photography. A microscope demonstration during an open house at the biology lab piqued his interest. “I immediately thought about how I could use them for art,” he says.

Once exposed to the idea of an unseen world, he became more attuned to the insects around his house. Rather than swatting them away, he collected them and began photographing them using two microscopes: one that includes a scanning electron, which could pinpoint minute details in black and white, and a more-traditional one that he uses for color and a laborious process of layering, often running 20 hours to complete a portrait and using multiple exposures.

“I was trained to use the microscope, then I sort of invented the process,” he says. “I wanted to make individual, anthropomorphized creatures full of character.”

“The intent was to demonstrate that we are not living in these hermetically sealed boxes,” he has said. “These creatures are a reflection of the landscape we are occupying as humans. We think of them in terms of eliminating the threat of them, these bugs. We as humans have plopped our homes on the lands that have existed before us. We are the ones who are new to their environment.”

Kariko’s project, which began in 2011, wound up taking eight years. He made about 35 portraits, received a book contract, made about 45 more, and then 56 were included in Aliens Among Us: Extraordinary Portraits of Ordinary Bugs, which was published in 2020.

“I tend to do things the hard way,” Kariko says. “For most scientists, spending 25 hours on a single image is ludicrous, but as artists, we’re happy to do this. But not many artists have access to that sort of equipment.”

While making his portraits and speaking with entomologists, he says, “it became painfully obvious that a lot of insects are undergoing extinction. It’s a silent disappearance. These insects are extremely important in our existence, not just as pollinators but because they get rid of bad things. That’s something that I’m trying to put out.”