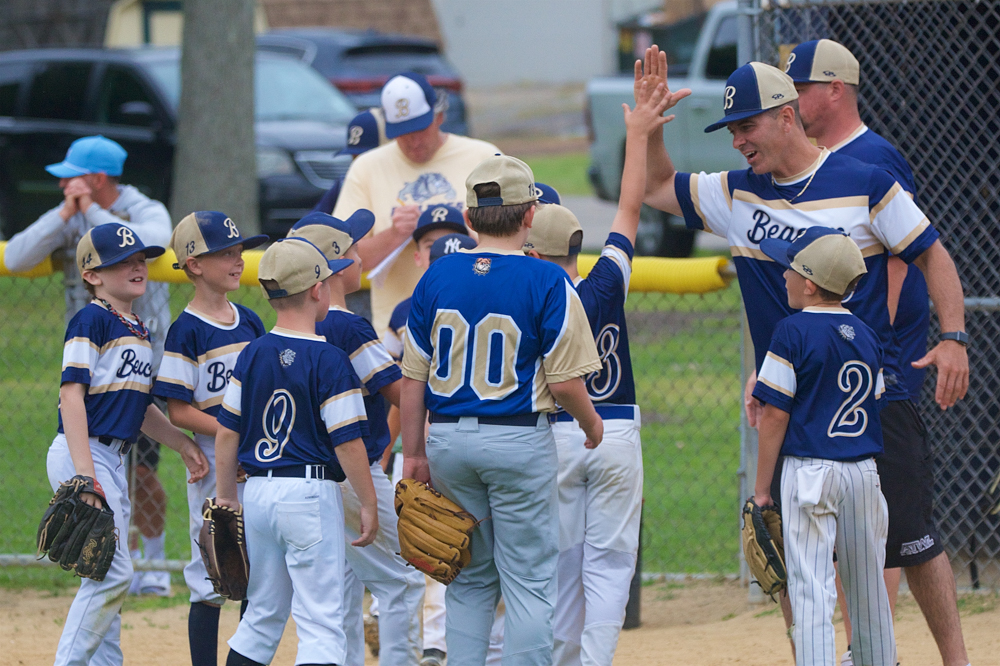 Coach Tom Virgadamo (right) and the 9U Bulldogs are off to a 3-2 this summer. (Photos by S. Pearlman)

Beacon’s 15U travel baseball team for players ages 15 and younger, which includes several players from the Beacon High School varsity, is off to a 7-1 start in the Greater Hudson Valley Baseball League summer season.

Last weekend, the Bulldogs won the nine-team New York Elite Baseball Battle of the Bats tournament in New Windsor, going 4-0. Beacon cruised through its last two games, dominating Crush Plunkett, 7-0, in the semifinals, and the Brewster Crush, 10-0, in the championship.

Beacon’s most recent win was Tuesday (June 21) at Robinson Lane in Hopewell Junction, where the Bulldogs picked up a 7-3 victory over the Northeast Pride, a team from Westchester County.

Jackson Atwell picked up the win on the mound for the Bulldogs in relief, going four  innings and striking out three. Ronnie Anzovino started and went two-plus innings.

Mercer Jordan drove in two runs and went 3-for-4 with a double. Liam Murphy was 2-for-4 with two RBI, Mikey Fontaine drove in a run and had three stolen bases, and Derrick Heaton doubled and drove in a run.

The team split a doubleheader on June 18, losing at Brewster, 9-6, before defeating the Bears, 6-5, in the nightcap.

“The guys have been coming together; this is a good group that plays unselfish, and works well together,” said Coach Bob Atwell.

“All of them can start or relieve,” Atwell said. “We’re working on pounding the zone, walk-to-strikeout ratio, and throwing secondary pitches for strikes.”

The team’s offense has been hitting at a .313 clip. “That average might be a little low for this team,” the coach said. “I feel like they can hit better.”

Atwell‘s team won the league title last summer and reached the championship game in the fall. “This is the same team, so I feel like we should be pretty competitive,” Atwell said.

The Bulldogs will face Fairfield in a doubleheader on Saturday (June 25) at Beacon High School, with games starting at 11 a.m. and 1 p.m. Next weekend the team heads to Hershey, Pennsylvania, for a tournament. 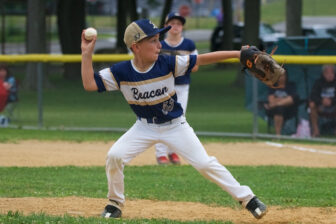 U9 pitcher Leo Virgadamo delivers on Tuesday (June 21) against the Hudson Valley Tigers.

Beacon’s 12U team, coached by Ryan Coval and Jed Varricchio, won its first two games of the summer season, beating the Putnam County Coyotes (Mahopac), 6-0, on June 12, and Wallkill, 18-1, a day later.

Against the Coyotes, Aidan Heaton and Elijah Epps combined to throw a no-hitter. Heaton started and went five innings, striking out seven, and Epps threw the final inning.

“To see Aiden come out and put on one of the best performances I’ve seen was great,” said Varricchio. “He made his pitches and located well. And Epps throws hard for a 12-year-old — he did a great job, as well.”

“Naim, Parker White and Epps are new to our team, and they’ve been a really nice addition to our group,” Varricchio said. “That was a great job by Dika, Fontaine, Epps and Jayden, and Nolan and Connor Varricchio are both starting to hit the ball well.”

The team, which lost 11-2 on June 19 to Marlboro, will play a doubleheader Sunday (June 26) at home against Poughkeepsie at 10 a.m. and noon. 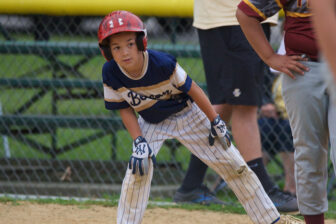 Easton White checks out the situation from first base during the Tuesday game.

The 9U team is off to a strong start, as well, winning two of its first three games. The Bulldogs came up short in their most recent game, on Tuesday (June 21), losing 11-3 at home to the Mid-Hudson Tigers of Kingston. But they scored earlier wins over Shrub Oak and Patterson.

“We ran into a buzz saw” against the Tigers, Assistant Coach Jed Varricchio said of the Kingston pitcher. “He threw hard, and he threw strikes. A lot of 9-year-olds are still learning to be aggressive at the plate.”

Leo Virgadamo, Ryan Spooner and Maxx Digneo handled the pitching for the Bulldogs, and Jack Giametta, AJ Constantino and Digneo each drove in runs. AJ Rhodus and Spooner also had hits for Beacon.

“Our pitchers did a nice job,” Varricchio said. “Leo throws strikes and he grinds, he has a great attitude, and gave us some good innings. Spooner is pitching for us for the first time, and Maxx is our hardest thrower. Offensively, we got some good at-bats from Hudson Fontaine and Easton White; they hit the ball hard. But Kingston made some good defensive plays.”

Along with Varricchio, Beacon is coached by Tom Virgadamo and assistants Anthony White and John Constantino. 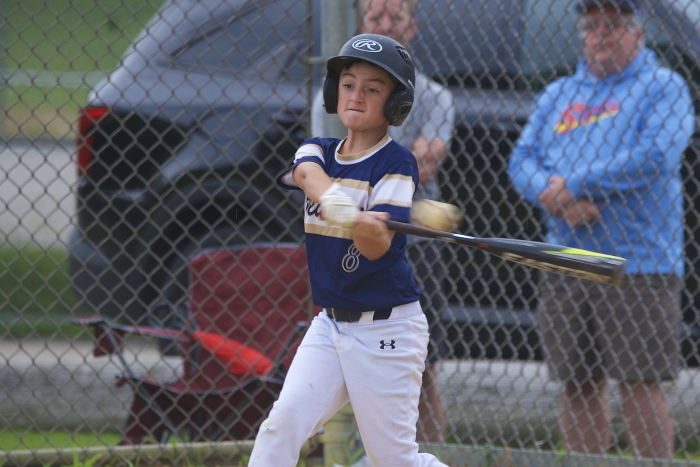 Beacon topped the Shrub Oak Storm, 10-5, on June 17 at Lakeland High School, with Constantino picking up the win, striking out six and allowing just four hits. Digneo and Easton White each pitched one inning.

Digneo drove in three runs at the plate, and Evan Eraca and Grady Barton each knocked in two.

Beacon defeated Patterson, 7-2, in its season opener on June 10. The team is scheduled to host Patterson on Saturday (June 25) at Memorial Park at 4:15 p.m.