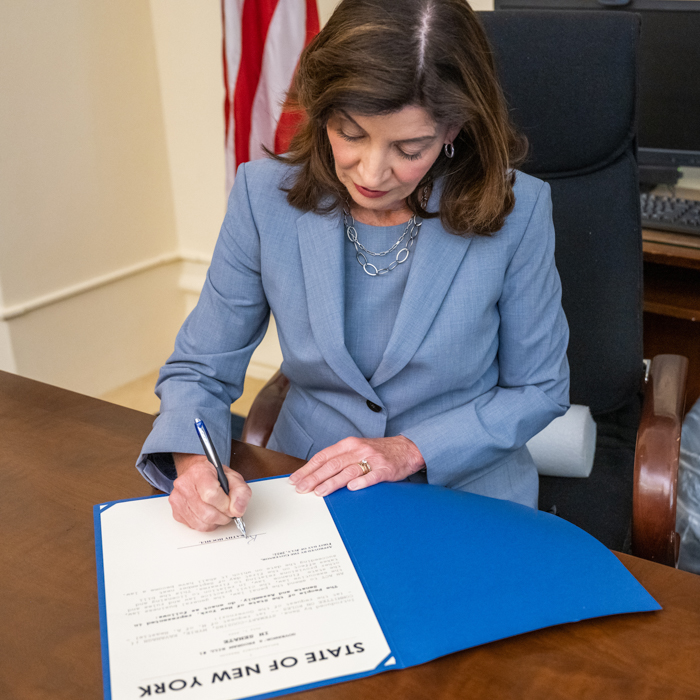 On July 1, Gov. Kathy Hochul enacted legislation designed to address a ruling by the U.S. Supreme Court that invalidated New York State’s concealed-carry laws. The law takes effect on Sept. 1. An appeals board for applicants whose license or renewal applications are denied or revoked will begin operating on April 1.

Among other provisions, the law:

■ Expands requirements for concealed-carry permits to include character references, firearm safety courses and live fire testing. The law will redefine “good moral character” for applicants, who must show “the essential character, temperament and judgment necessary to be entrusted with a weapon and to use it in a manner that does not endanger oneself or others.”

■ Weapons will be banned on private property by default unless the property owner says otherwise, which the governor’s office says “gives power to business and property owners to decide whether they want guns in their establishments. Property owners who do decide to allow concealed-carry will have to disclose with signage saying concealed carry is allowed on the premises.”

■ Raises the age at which guns must be secured from 16 to 18. That is, if any resident of a home is 18 years or younger, firearms must have trigger locks or be stored in a locked cabinet or safe. In addition, the law makes it illegal to leave a weapon in a vehicle unless it is in a lockbox.

■ Allows the state to conduct background checks for license holders and ammunition sales that go beyond federal requirements.

■ Redefines “body vest” to close a loophole that excluded hard armor. During the Buffalo killings, the alleged shooter was wearing a steel-plated vest.

On June 6, Hochul enacted laws designed to restrict access to weapons. The new regulations include those that:

■ Ban the purchase of body armor by anyone who does not work in law enforcement or a similar job.

■ Expand the professions that can file an “extreme risk protection order” (or red flag) for an individual who may be dangerous. It now will include physicians, psychiatrists, psychologists, registered nurses, social workers, therapists and counselors who have examined the person within the previous six months.

■ Eliminate a provision that made it legal to possess large-capacity ammunition feeding devices if they were obtained before the NY Safe Act went into effect in 2013 or were manufactured before 1994.