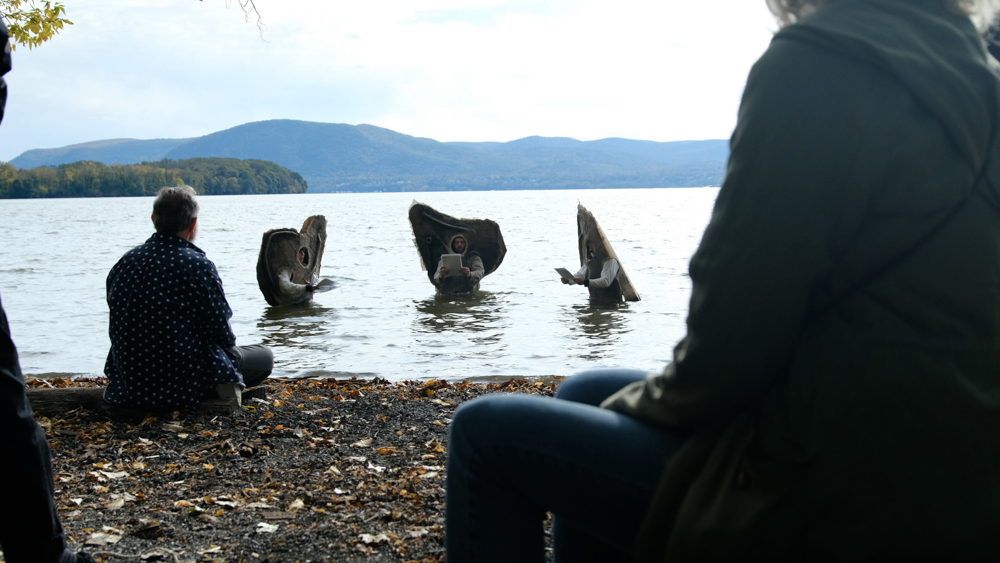 Liz Zito, Eric Magnus and Andrew Brehm perform “The Oysters,” by Miranda Rose Hall, at Soon is Now in 2021.

Soon is Now returns to Beacon

On Sept. 24, Long Dock Park in Beacon again will be the setting for a climate-arts event focusing not on dire prognostications but hoping to spark action and hope.

Titled Soon is Now, the free event will run from 2 to 5 p.m. with performances, participatory arts and tables hosted by community members and stocked with information on activism. Guided tours of the performances will begin at 3 p.m. Now in its second year, Soon is Now is part of the Sustainable Hudson Valley’s Climate Solutions Week, which begins Saturday (Sept. 17).

Eve Morgenstern, the founder and director of Soon is Now, describes it as an “immersive day of climate theater, eco-themed art and activism set in a beautiful, ecologically sustainable park that was once a toxic brownfield” and originally the territory of the Wappinger, Mohican and Munsee peoples.

“Art moves us, our hearts and minds, to the greatest challenge of our time — to act and to communicate,” says Morgenstern, a documentary filmmaker and photographer. The setting is right, she adds, because “the region has been a vital history of environmental activism rooted in Scenic Hudson’s fight to save Storm King Mountain from industry and Pete Seeger’s fight for an unpolluted Hudson River.

“It feels great to do some kind of climate arts project in Beacon, linked to so many wonderful projects done around the world. So much action can be taken now that the Inflation Reduction Act passed [in August]. There are small and large ways people can help.” 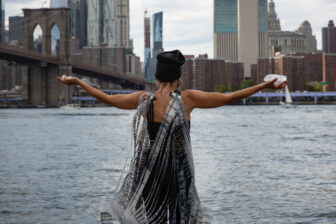 The afternoon will include several in situ performances. Morgenstern, along with Beacon residents Connie Hall and Brian Mendes, theater professionals who are fellow producers of the event, walked around Long Dock envisioning where each performance could take place. For example, dancer and choreographer Elise Knudson will be located at the George Trakas environmental sculpture at Beacon Point, conveying, through body and movement, the rising level of the river tides in a piece performed with two other dancers to Lou Reed’s “River Wind Meditations.”

Once they saw where they would be located, “some performers fine-tuned it,” says Morgenstern. “For example, [poet] Edwin Torres shifted his slightly so the view was extended. Learning from last year, we’ve been more collaborative with the artists in planning.” A former poet laureate of Beacon, Torres will perform with an ensemble he’s calling a “poet’s orchestra.” 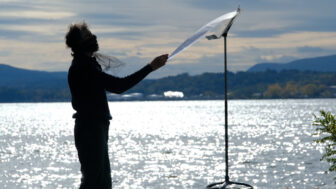 Edwin Torres performing “And My Mother’s Mother’s Other” at Soon is Now in 2021.

Other shows will include Jaanika Peerna, whose work encompasses drawing, video, light, installation and performance, and who often deals with natural phenomena, in Glacier Elegy with Coco Karel; Twinkle Burke and Stephanie Anuwe in How to Hold Water, a play by Erika Dickerson-Despenza; Connie Hall in The Penguin; and Tom King and Katiana Rangel in an original piece about extinct birds. Jean Brennan will also display her eco-themed art.

The plays originated with Climate Change Theatre Action, which commissions playwrights from around the world to write five-minute plays based on a prompt. The collected plays are made available for readings, performances, radio shows, podcasts, film and other adaptations. 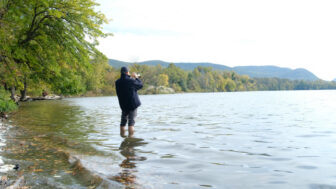 “The presentations aren’t meant to be polemics,” says Morgenstern, but to present an interplay with nature “that allows the audience to absorb climate narratives in a space that reminds us of the beauty and fragility of our earth.”