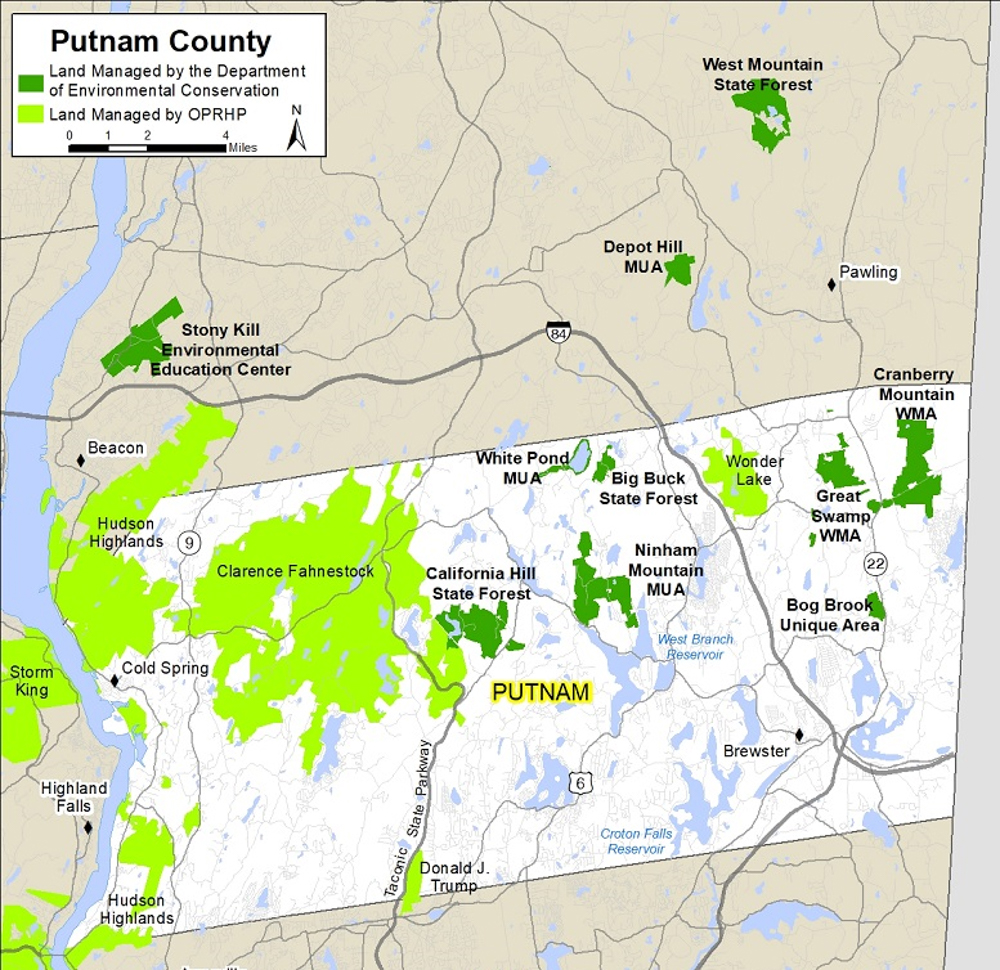 A DEC map shows the parks it maintains in Putnam and southern Dutchess counties.

The state Department of Environmental Conservation has released a draft of its next “East of Hudson” management plan, which outlines proposed actions to be taken over the next 10 years in the nearly 6,700 acres that the agency manages in Putnam, Dutchess and Westchester counties.

The suggested changes include:

The Mount Beacon Fire Tower is the property of the DEC, although it is located in the Hudson Highlands State Park Preserve, which is managed by the state Office of Parks, Recreation & Historic Preservation (OPRHP). The report suggests that ownership be transferred to state parks.

In 2017, the state acknowledged the existence of an unauthorized 10-mile system of mountain biking trails on this 982-acre state park near Kent. Under agency regulations, “no part or portion of the trail network can be designed to accommodate an exclusive use by a single user group.” Working with the New York-New Jersey Trail Conference, the DEC has begun reworking the trails with the goal of using them as the foundation of a 7-mile system accessible to mountain bikers, hikers and hunters.

The plan proposes continuing this work as well as enlarging the parking lot at the trailhead. The DEC also recommends the construction of two camping sites at the western shore of Pudding Street Pond that would be accessible only to paddlers. (The pond is closed to motorized boats.)

How to Give Feedback

The East of Hudson plan is online at tinyurl.com/eastofhudson. An information session will be held from 5 to 8 p.m. on Nov. 22 at the Town of Kent Courthouse, 25 Syblis Crossing, Carmel. During the first hour, members of the public can speak with DEC staff. That will be followed by a presentation of the plan and the opportunity to make public comments. The deadline for written comments is Dec. 22. They can be emailed to [email protected]. 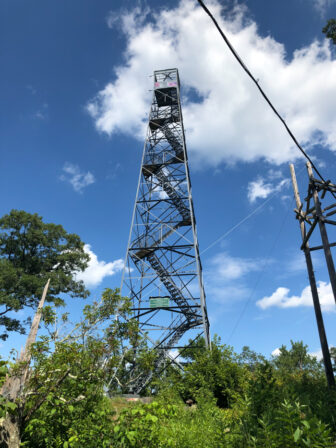 The DEC is proposing an update of the fire tower on Ninham Mountain in Kent, which is still accessible despite arsenic contamination on-site. (Photo by B. Cronin)

In 2019, the state began mitigation efforts to deal with extensive arsenic contamination from abandoned mines at this Town of Kent site. Aside from updating the fire tower at the summit, the DEC suggests that no infrastructure be built because the land has been added by the Environmental Protection Agency’s to its Superfund registry of heavily polluted sites.

However, the state does not suggest the mountain be closed. Signage at trailheads urges hikers to stay on the trail because of the contamination, and “the public can choose to recreate at the property at their discretion.”

Although these two sites are adjacent in the Town of Kent, accessing both at the same time currently would require going off trail. In addition to improving their parking lots, the DEC proposes a trail from the summit of Big Buck Mountain that travels west and connects to the White Pond trail, which would be extended around the pond from its south shore.

West Mountain State Forest (Dutchess)
In 2021, the DEC downgraded the Pawling Lakes Estates Dam from low to medium hazard because of erosion. For $1.4 million, the dam could be rebuilt, the proposal notes. Or, for $150,000, it could be intentionally breached, allowing the upstream area to “naturally redevelop.”

The advantage of the latter plan, besides being a one-time expense that would negate any further maintenance, lies in the fact that the pond, while on DEC land, can only be accessed by residents of Pawling Lakes Estates. “Maintaining a public infrastructure asset that is directly accessible to a private community and not to the public is an inefficient use of state resources,” says the report.