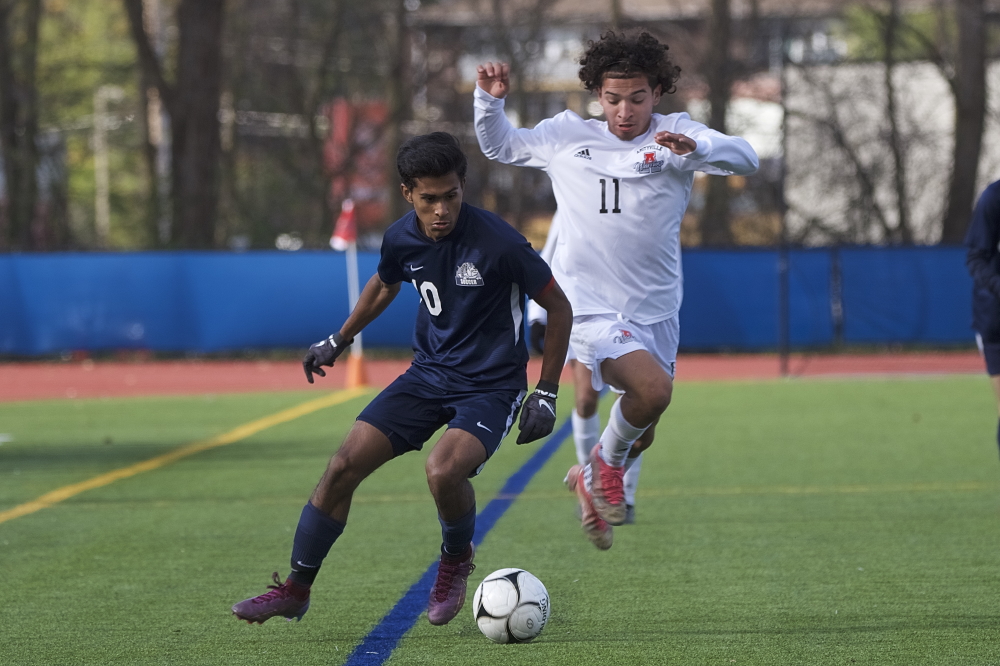 Andre Alzate (10) looks to play a ball against Amityville. (Photo by S. Pearlman)

A magical run came to a heartbreaking end on Sunday (Nov. 13) for the Beacon High School boys’ soccer team, as the Bulldogs finally met an opponent they couldn’t handle and dropped a 4-0 decision to Amityville in the Class A state title game at Middletown High School.

No one expected the Bulldogs, who finished the regular season 9-3-2, third in their league behind Goshen and Cornwall, and seeded No. 2 in the Section IX tournament, to appear in the title game, but there they were. It was the first Beacon boys’ soccer team to reach the championship match.

Amityville, which finished 20-1-1, lost in the state title game last year to Somers, 7-2. It also won state titles in 2015 and 2018. The Warriors seemed to have speed at every position, and thwarted all the Bulldogs’ scoring opportunities, which were few and far between.

Amityville controlled most of the play throughout the game and kept consistent pressure on the Bulldogs. The Warriors led 2-0 at halftime, and never let Beacon back in the game, adding a pair of insurance goals in the second half.

“Initially, of course, the feeling is disappointment,” said Coach Craig Seaman, who is in his 23rd season at Beacon. “Knowing what could have been … At the same time, the journey’s been unbelievable. One game can’t take away from that. It’s been a historic postseason run for these guys.

“Amityville is super-talented,” Seaman added. “Their front three are super-skilled, very fast and they really go at you. One through 11, they’re talented, one of the best high school teams I’ve ever seen.”

Beacon captain Jack Philipbar said the Bulldogs, a group that’s been together for many years, will remember the journey.

“It’s unfortunate to have to lose that way,” Philipbar said. “They’re a great team. We worked hard all season to get here, and we’ve got to be proud of the season we had. We played club ball together for a long time, and we’ve been together for a long time; we love to hang out with each other … It’s a really special group. Not so much the ending, but the season we had.”