As with many professional musicians, the pandemic sidelined Jeff Barone. But three years later, the jazz guitarist says he’s happy about where he ended up: at the Garrison school district. 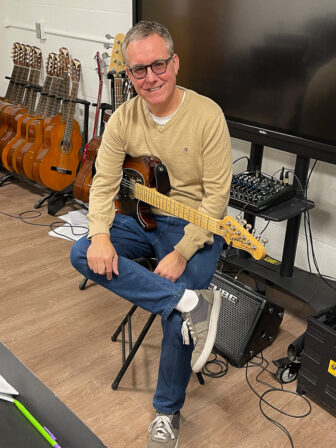 Jeff Barone at the Garrison School (Photo by J. Asher)

His final gig before the shutdown was with the Jeff Barone Trio at The Bar Next Door in New York City, one of many jazz clubs where he performed to packed houses. One of his first at Garrison Middle School will be directing the student band for a performance at 7 p.m. on Wednesday (Dec. 21), its first live holiday concert since 2019.

The Garrison school district hired Barone last year to lead the music and theater department, which includes the band. Before the pandemic, Barone’s typical holiday schedule, in addition to performing in all of Manhattan’s major jazz clubs, included conducting the Big Apple Circus band at Lincoln Center and playing in orchestras for Broadway shows such as Dear Evan Hansen and Seussical.

“It’s two different worlds,” says Barone, who still plays at jazz clubs around the country. “Both are rewarding, but in different ways.”

When he took over as director, he needed musicians. Many students had stopped practicing their instruments during the pandemic. “I went around to all the classrooms and asked, ‘Who plays an instrument?’” he recalls.

Barone recruited 15 students but found their skill levels varied so widely, he had to write several versions of each song. For example, for the spring concert in May, students pleaded with him to include “We Don’t Talk About Bruno,” the hit from the film Encanto. But Barone thought it was too hard. “It’s Latin,” he said. “It’s syncopated. They’ll never be able to do this.”

His students insisted, so Barone wrote a version they would be able to perform. “Duke Ellington wrote for his band,” he said. “I write for the kids. I arranged 12 bars and strategically gave certain parts to certain people.” 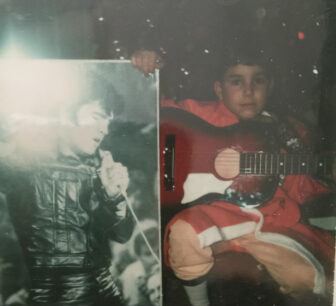 Barone at age 7 with Elvis, and his first guitar (Photo provided)

He said he did the same for next week’s concert. His students loved the lilting version of “Somewhere Over the Rainbow” by the Hawaiian musician known as IZ. For the Garrison students, Barone transformed it into reggae.

Once a student masters a version of a song written for him or her, Barone rewrites it to make it tougher. “I push them to the next level,” he says.

Sometimes his students surprise him. Ames Jannetta, 13, plays piano in the band. Barone saw Jannetta playing in a music class and asked him to join the band. “He kind of recruited me,” says the teenager.

Barone also learned that Ames wrote songs, including one called “Band Kid Beat.” He told Ames: “If you can develop that, maybe we’ll do it in the concert.” He did, and the students performed the song at the spring concert.

“I’ve only seen a small handful of music teachers who work this way,” said Carl Albano, the Garrison superintendent.

Barone, 52, who lives in Peekskill, grew up in Syracuse. Knowing her 7-year-old son loved Elvis, his mother gave him a guitar for Christmas. He took lessons from his cousin, Joe Stagnitta, who owned a local music store.

By age 13, Barone had a summer job performing three times a day in the Syracuse Parks and Recreation All-Star Band. By 16, he was gigging at taverns and clubs, including the Three Rivers Inn, which attracted the likes of Bobby Darin, Nat King Cole and Tony Bennett. One of Barone’s early gigs was with Al Martino, an old-style crooner who portrayed the singer Johnny Fontaine in The Godfather.

Barone earned a bachelor’s degree in instrumental music education and a master’s degree in jazz guitar. He taught a bit but eventually built a career as a jazz guitarist, appearing in clubs and on Broadway, and touring in the U.S. and Canada with Patti LuPone, Linda Lavin, Bobby Caldwell, Kathleen Turner and other performers.

He recorded two albums, Crazy Talk and Open Up, and is included in The Great Jazz Guitarists: The Ultimate Guide, by Scott Yanow. Barone also has appeared on the cover of Just Jazz Guitar magazine.

His reputation brought him many opportunities to perform. “I was on a conveyor belt that was out of control,” he says. But the conveyor belt came to a sudden halt when the pandemic hit in early 2020.

To earn a little money, Barone became a substitute teacher at Garrison. But when Albano offered to hire Barone as the music teacher, he hesitated. The students were still learning remotely, and the idea of teaching band that way seemed far-fetched. “I didn’t know if I could be effective,” Barone said.

But by all accounts, he has been highly effective. The music program at the small school now has 39 students. In fact, about half of the middle school is in the band, said Albano. “I’ve worked with many music teachers over my 30-year career and he is one of the best I’ve ever worked with.”

Barone still performs in Manhattan and around the country and says he loves both of his jobs. “That feeling I get playing to a packed house in the city is the same feeling I get after a student performance in Garrison,” he said. “I’m hoping they’re trying their best. And I’m hoping I’m doing my best, as well.”