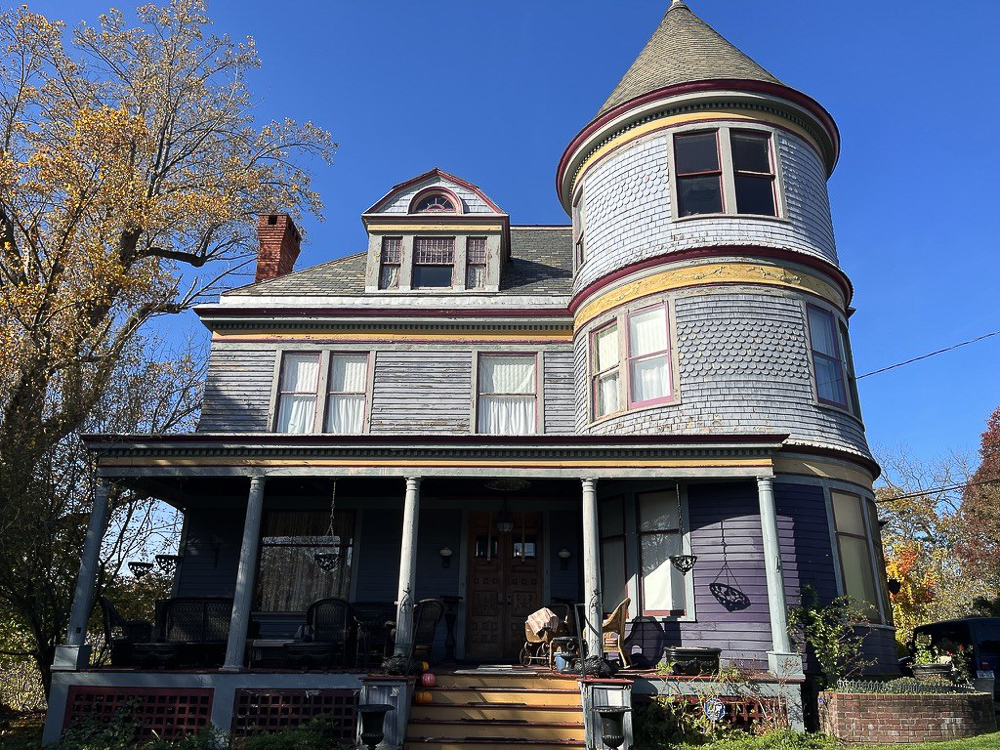 It continues to inspire her, in more ways than one. 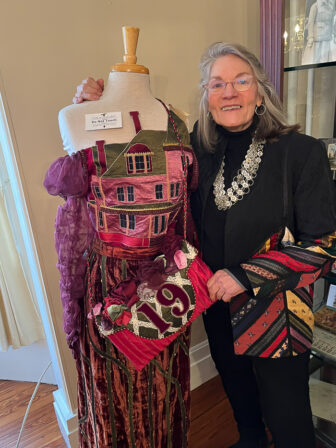 Shirley Botsford with a dress she created that was inspired by her home (Photo by A. Rooney)

Botsford, a sewing and design professional, began to create patterns based on elements in the home, such as a newel post, a stained-glass window, a tile floor and a carved fireplace mantel. (They are all included in her book, Decorating with Fabric Crafts.)

And now, the Beacon Historical Society has enlisted Botsford for an exhibit that runs through Feb. 18: A Common Thread, which “highlights Shirley’s connection to her historical home and her connection to Beacon’s textile industry,” explains Diane Lapis, director of special projects at the historical society.

Botsford’s home, at 19 High St., is one of two in Beacon designed by Poughkeepsie architect Arnout Cannon. The other was the Dibble House, which was located across the street from the Beacon Theater and now houses Carter’s Restaurant and the former Beacon Hotel. Cannon also designed the Wilderstein estate in Rhinebeck and what is now the Cunneen-Hackett Arts Center in Poughkeepsie.

Botsford bought 19 High St. in 1994, moving from the house next door. She had earlier relocated to Beacon from New York City after digital production changed the design industry.

“I hand drew and could do layouts, but those weren’t needed, and finally I wasn’t involved in production any longer,” Botsford recalls. “I decided I wanted to live in Beacon in an old Victorian house.” 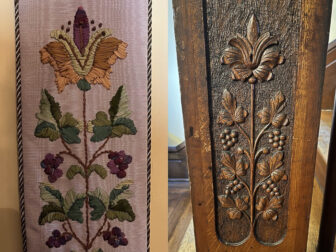 A bell pull designed and made by Shirley Botsford (left) is based on a carved panel at Botsford Briar (right).

During her 22 years in New York City, Botsford worked with “anything that could be sewn,” she says. She had learned as a child. “My grandmother did sewing for spare change; she said you can’t create a career. My mother taught me at 4, throwing me scraps to sew, while she was ironing. I loved it.”

As a young adult, Botsford studied at Philadelphia’s Moore College of Art. After stints at magazines, as a costumer and in television production, Botsford landed at Simplicity Patterns, for which she is still designing, decades later.

When she started, she was mostly designing garments for catalog models, she says. She describes her output during that time as “accessories, crafts, babies, a mass-market, not really art sewing, but I still loved doing it.” 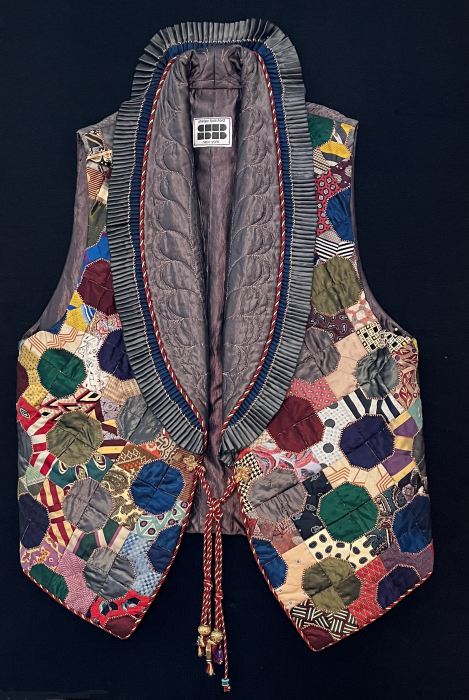 A vest created by Shirley Botsford

She began helping to create books that promoted Simplicity Patterns. “It’s challenging to come up with something ‘on trend’ and original which also fits within the criteria of what they need,” she says.

“You had to do them at the plant back in the day,” she says. “For example, there might be an orange dye job, and the orange had to be an exact match with a John Deere product. It usually took about an hour to get it right. The dye would drain out across Fishkill Creek, and the creek would run the color of the dye. Kids swimming in the creek would turn blue — not good!”

She also began writing her own books. Her first, Between Thimble and Thumb, was about quilting, while her second, Making Gifts for Men, was a how-to guide to recycling shirts and other fabrics into creative projects.

Her third book, Daddy’s Ties, is her most personal. “My dad was a tie aficionado. My mom saved his ties for me and I used them to create new things, like keepsakes, quilts, pillows, accessories, even lampshades. I made a garment for a fashion show and there was not a dry eye on the runway.”

The Beacon Historical Society, at 61 Leonard St., is open from 10 a.m. to noon on Thursdays and noon to 4 p.m. on Saturdays, or by appointment. Call 845-831-0514 or email [email protected]. Botsford will lead an adult class Feb. 11 in which participants can create a fabric flower or bow from a silk tie. The cost is $15; email to register. There are also activities for younger children on most days when the exhibit is open.

In the original version of this story,  we stated that the Dibble House stood on the site of the Beacon Theater. In fact, according to Diane Lapis of the Beacon Historical Society, the house was located across the street on the site now occupied by Carter’s Restaurant and the former Beacon Hotel. “You can still see the turrets, but it has been renovated so many times it is barely recognizable,” she said. The Dibble Theater was torn down in the 1920s to make way for the current Beacon Theater. In addition, we stated that the Wilderstein estate designed by Cannon is located in Rhinecliff. In fact, it is in Rhinebeck.