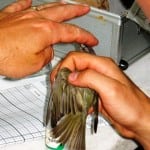 A crucial part of their mission: collecting data on the many birds which visit during the summer season.

Eight times a year the naturalists at the Constitution Marsh Audubon Center and Sanctuary set out in the wee hours of the morning to perform a crucial part of their mission: collecting data on the many species of birds which visit during the summer season.  Beginning in June, the bird banding takes place every 7 to 12 days, under very specific conditions.  This year’s banding sessions concluded on August 2, when Philipstown.info observed.  Five hundred other stations throughout North America also participate, on the same dates and following the same protocols.  The material gathered from every participating station is then analyzed at the Institute of Bird Populations, located at Point Reyes, Calif., as part of the Monitoring Avian Productivity and Survivorship (MAPS) program of continent-wide demographic monitoring. Per the Institute’s Web site, the MAPS program comprises a “continent-wide network of hundreds of constant-effort mist netting stations. Analyses of the resulting banding data provide critical information relating to the ecology, conservation and management of North American land-bird populations, and the factors responsible for changes in their populations.” 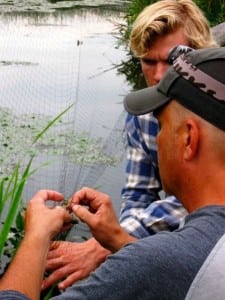 Eric's experienced hands remove a bird from the net

The morning begins in darkness at around 4 a.m. when Center Director Eric Lind and Assistant Director Rich Anderson, together with summer college and high school interns, venture out to various far-flung parts of the Marsh to hang fine mesh nets, designed to trap birds humanely. The goal is for the birds, who don’t detect the nets, to fly into small pockets, from which they are quickly and carefully removed, for examination and banding.

After the nets are set and the sun begins to rise, members of the team spread out for the first round of bird collection.  All are in touch with each other via walkie-talkie, in case of any difficulties extracting a bird from a net. The team is very careful not to leave any bird in a net for too long, particularly as the morning goes on, as direct exposure to sun is of great danger to birds. Not every net yields birds, and the intake from the first walk-through on Aug. 2 was minimal until net #10 was reached.  But first up was a Marsh Wren from net #3. According to Eric Lind, the Marsh Wrens are “very habitat-specific, and we want to keep an eye on them.”  Undoing this Marsh Wren from the net was a little tricky” a not uncommon situation, evidently, as the wrens are “notorious for tangling.”  Sometimes a net has to be cut to safely remove a bird.

Once a bird is extricated, it is immediately moved to a white cloth bag, which is closed with a wooden clothespin marked with the number of the net. This is done both to accurately record where the bird was captured, and to ensure that the birds are examined in the order in which they were caught. When a number of birds have been extracted, the naturalist walks back to the data collection station, hangs the bags in order, and the in-sequence examination begins. 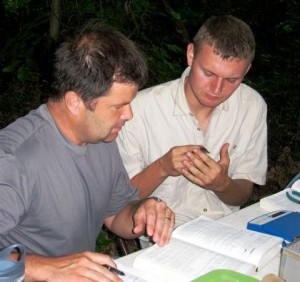 Rich (l) and Tom make determinations about the bird

When holding the birds for examination, it is best to “hold them loosely, and risk escape, rather than risk harming them with a firmer grip,” notes Rich Anderson.  If a bird gets overly stressed, it is released immediately. The banding itself is the priority.  If a bird manages to escape, at the very least its habitat has been noted.  The bands themselves are all uniquely numbered, and are easily slipped on and then closed up with special pliers, the band floating freely on a leg.  The birds carry these bands for the duration of their lives.  Many of the birds now inhabiting the Marsh migrate as far south as the Gulf of Mexico.  With this system, according to Lind “if a researcher in Mexico captures the bird, and records it, we’ll know where they are wintering and can get a truly comprehensive picture of the bird.” 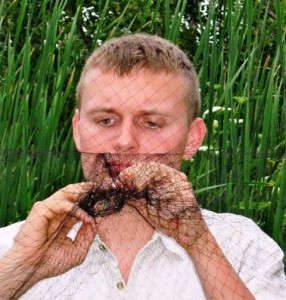 After banding, it is time to assess and record the details.  Here the interns work under the direction of the Audubon staff as they hold each bird and make determinations.  Using “Identification Guide to North American Birds” by Peter Pyle as their primary guide, college interns Ian Kingsley, from the SUNY College of Environmental Science and Forestry, and Tom Schmeelk of SUNY Oneonta, determine age, gender and condition.  Feathers come first in gauging age.  As Eric Lind describes it, “primary, secondary and tertiary feathers tell us a great deal. Coverts also tell us a lot”hey cover the primary and secondary.  We also look at the tail feathers and everything else—the full body plumage.  If the undertail covert feathers on the abdomen just above the tail are loosely textured, the bird is likely a juvenile.  If there is no breeding plumage, the bird is either very young, or a female.”  A straw is blown through to divert feathers and researchers look for fat deposits.  Birds accumulate fat to use in migration.

The color of the lining of the mouth and the iris also help in diagnostics. In some species the eye gets darker with age.  A Grey Catbird is determined to be a juvenile through its “dingy, wispy feathers, and lack of breeding characteristics.  It was definitely hatched this summer,” Anderson comments. Other data collection includes the measurement of the wing and the weight of the bird.  For weighing, each bird is carefully inserted into a cardboard tube and placed on a scale. 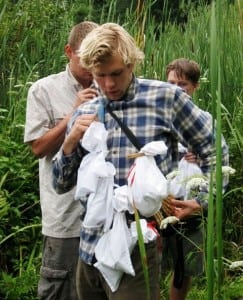 Ian carries the birds in bags to the examination station

This type of documentation also records changes over periods of time, as many of the birds being examined are returnees, having already been banded  With these birds, the focus is on what they’re now doing, and if they are reproducing.  “We’re seeing birds now that we would never normally see. Climate warming is bringing birds here that don’t like it too warm; they are shifting north,” says Anderson. A detailed habitat study is performed every 5 years.  This study takes into account both naturally and human-induced changes: things like fires, storms and subdivisions. Links are made between changes in bird population and changes in habitat. 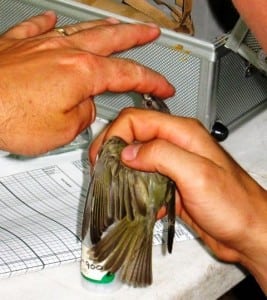 Visitors are welcome at Constitution Marsh throughout the year (though not at the bird banding sessions).  For more information on the site and the many programs which take place there, visit constitutionmarsh.org or call 845-265-2601.