A highly successful tradition continued on Wednesday, September 8 as The Garrison hosted the annual Cold Spring Farmers’ Market (CSFM) community dinner.  The dinner celebrates what has become mainstay of Philipstown life — a robust market held every Saturday morning from mid May through November that features a variety of fresh foods produced on farms in the Hudson Valley. Residents came out in big numbers to support the market. One estimate put the crowd at 300 hundred fresh-food lovers.
“We think this is the eighth dinner but we’re not exactly sure,” said Steve Bates, who co-manages CSFM along with Lachele Coninx-Wiley.  The market was established in 2002, in response to the loss of the Grand Union grocery store which was destroyed by fire. The market had only four or five vendors 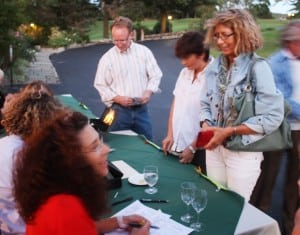 that first year but has grown since to include 20 stalls each week. The Village of Cold Spring has been the official sponsor of the market since its inception. A good indication of the support CSFM enjoys in the community is the more than 30 local businesses that paid a fee in 2010 to be listed as additional sponsors.
“Planning the dinner makes you realize the talent and resourcefulness of our vendors-and the challenges they sometimes face,” Bates said. As an example he said that “Captain Rick,” a CSFM vendor who fishes off of Long Island had pledged fifty pounds of sand shark for the dinner.  When he went put out to sea to make the catch just after Hurricane Earl, the aftermath of the storm resulted in there being no catch at all.  Fellow vendors came to the rescue and provided more chicken and beef than originally planned. 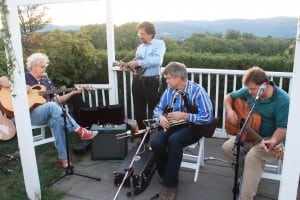 The CSFM dinner may be the definition of low overhead. Almost all of the food served at the dinner is donated by the market’s farmers and vendors. Protein items are provided at greatly reduced cost. The Garrison provides the venue, cooking and wait staff at no cost. Local musicians again donated their talent to the 2010 dinner as they have in the past. This year’s band featured Al Hemberger, John Teagle, Mike LaRocca, Andy Revkin, Seth Gallagher and Joe Murphy. The dinner is the market’s biggest fundraiser with all proceeds going to support CSFM. This year’s buffet menu featured assorted breads; salad; penne pasta with creamed corn and Swiss chard; shredded chicken with peppers, garlic and carrots; sirloin tips with mushrooms, onions and red wine; potato and string bean salad and assorted vegetables. Desert included apple bread pudding, pear crisp and carrot cake.
The 2010 season marked a homecoming for CSFM as it returned to its 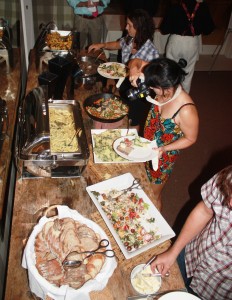 Guests line up for the feast.

original location at the Butterfield Hospital site after being at The Nest for several years. “We had a good long run at The Nest,” said Shelley Boris who co-chairs the CSFM board. “People really wanted to keep the market in the village. We’re excited to be back at Butterfield.” Cold Spring resident John Allison echoed what was the predominant sentiment around the very full banquet room. “This dinner has become an end of summer, back to school annual tradition for us. It has great food, great people and great music. And we like to support the market.”
Boris said that the market will go indoors for the winter on Saturday, November 6 when it moves down the road to the Philipstown Community Center at Glenclyffe on Route 9 D in Garrison. Until then, CSFM remains open each Saturday at the Butterfield site. [slide]

One thought on “Farmers Market Dinner Draws a Crowd”