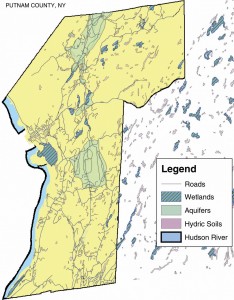 Philipstown’s complicated route to an updated zoning code took another turn this month with dissemination of a new draft that clarifies provisions on non-conformity and doubles the size of tracts that can be disturbed in hillside-protection areas without triggering site-plan scrutiny. Dated Oct. 7 and available on the Town of Philipstown website, the 107-page document contains only about a dozen changes from the prior, July draft. Several alterations deal with non-conforming properties — those whose uses fail to meet the requirements of a revised code.
Under Article VI, the draft adds a line that specifically states that “non-conforming uses, structures, and lots are legally permitted to be maintained in accordance with the provisions of this chapter.” Chapter 175 of the Philipstown Code covers zoning. If approved by the Philipstown Town Board after a hearing process and completion of other final steps, the rezoning draft will replace the existing text of Chapter 175. Since 2008, the town has been working through a series of redrafts, releasing most sequentially since the debut of a controversial version — the second overall — in August 2009. The October text is the sixth.
The July draft had already provided that a non-conforming business could continue to operate. The October draft expands the leeway in terms of operating a similar business after a sale. Thus the new draft states: “Any business owner or tenant may continue to operate an existing business, or any business in the same use category as the existing business, in a zone where it is not permitted by this chapter, and may sell or transfer it to another owner or tenant who shall be permitted to operate the same business or any business in the same use category as the existing business, in the future.” The phrase with the new, upgraded permission appears at the end, italicized here.
Similarly, the October draft elaborates on the role of the Philipstown Zoning Board of Appeals (ZBA) in handling proposals to expand the size of a non-conforming business. Previously, the proposed rezoning had provided for expansions, under some conditions, with the permission of the ZBA. The October draft stipulates that “in the case of a proposed enlargement of a non-conforming structure used legally for business purposes in the Highway Commercial, Hamlet-Mixed Use, Office Commercial-Industry Mixed-Use, or Industrial-Manufacturing districts, the board shall be required to find only that the enlargement will have no greater impact on the public and on any neighboring residential or institutional uses than the existing structure and will not have an adverse impact on the appearance of the site.”
In a related move, the new draft restricts the town Planning Board’s scope in regard to site plan reviews of non-conforming properties. It states that “in considering any site plan amendment or any site plan approval for an existing use or structure, the Planning Board shall be limited to reviewing proposed changes and shall not require changes to any structures or conditions on the property legally in existence prior to such application, even if such structures or conditions are nonconforming.” It adds the words italicized here.
A section discussing ridgeline and hillside protection increases from 1,000 square feet to 2,000 square feet the amount of land that can be disturbed without recourse to site-plan review. The new draft reads: “Within the Hillside Protection Area, any structure containing 500 square feet or more of floor area or which is more than 25 feet in height, and any land disturbance of 2,000 square feet or more, shall be subject to site plan review.”
Some of the changes in the new draft seem intended enhance precision. For example, the draft makes clear that it refers to unregistered trailers in a measure prohibiting certain types of commercial signage; it had already used “unregistered” to refer to vehicles, in the same context. It now states: “Portable signs that are mounted on wheels, including unregistered motor vehicles or unregistered trailers parked in one location for more than 30 days in any calendar year and functioning primarily as signs, shall be prohibited.”
The draft also tightens the demands affecting outdoor recreational businesses in the institutional conservation district, which covers institutional uses of properties, 20 acres or larger in size, “that maintain significant amounts of contiguous open space and/or historic structures.” The previous draft allowed such recreational businesses as a permitted right. The new draft stipulates that they need a special permit.