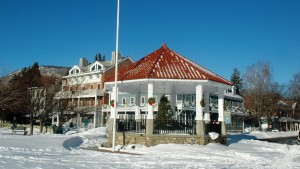 Snow blankets area around the bandstand.

MetroNorth is running a regular weekday schedule, with “good service” reported on the Hudson Line.
Airports are open but delays remain
Weather is expected to continue clear with temperatures rising through New Years Day. Click here for details

Road crews worked much of the night and residents shoveled by day to clear their walkways after more than a foot of snow blanketed Philipstown Sunday and early Monday, Dec. 26-27. Winds whipping through the Hudson Valley complicated but did not stop the clean-up, while residents of part of Cold Spring waited out the chill after electricity failed.

On Main Street in Cold Spring, many shops remained closed in mid-afternoon, as did the Village Hall, although Monday was a scheduled, post-Christmas holiday anyway. But Deputy Mayor Bruce Campbell spent part of the day catching up on paperwork in the office after being out checking on the situation around the village until late Sunday night, resuming in early morning.

Philipstown Highway Superintendent Roger Chirico reported “we’re still here” early afternoon Monday, following a hectic night. He said his crews, using about 20 trucks altogether, handled the plowing and clearing, starting about 3 p.m. on Sunday., They worked until around 1 a.m., when the gusts and blinding snowfall made it too difficult to continue in the dark. “That was a tough storm. It got to the point where you couldn’t see and we all had to stop. Trees were falling. You couldn’t see where you were going.” They resumed a few hours later, he said. A tree limb hit a truck, which can be repaired, and a few other vehicles sustained minor damage, Chirico said. “I’d say it was a job well done,” he said of his crews. 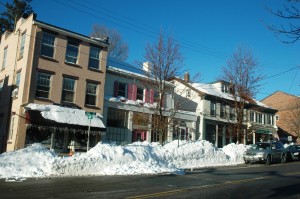 Snow piles high along the curb

“You work 16 hours straight driving a truck. And it’s not easy; there’s no doubt about it,” Town Supervisor Richard Shea said in praising the road crews. On East Mountain Road, where Shea lives, and similar roads, “you can plow all day and then the wind comes - and stirs the snow up once more. Reached by phone at home around 1 p.m., he reported that “everything is open” for traffic in the town. Chirico worked alongside his crews and brought in private truckers to help the Highway Department keep up, Shea said.

Cold Spring Highway Department crews also worked much of the night, Campbell said. A trustee as well as the deputy mayor, he supervised the activity in the absence of Mayor Seth Gallagher, who was in Washington. “I was out much of the evening,” until 10:30 or 11 p.m. on Sunday and back at it around 7 a.m., he said. He said that the street crews put in even longer hours, working overnight until visibility failed and then returning in early morning. Conditions became so bad overnight that even on the familiar streets of Cold Spring it was difficult for drivers to tell where they were, he 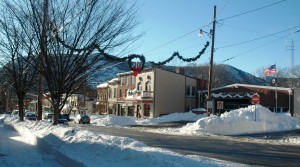 Little traffic ventures forth on a bright afternoon

said. “It was interesting because there was so much snow coming down so fast. They had a hard time keeping up with it.” He noted that homes on Parrott Street lost power. The storm forced Police Officer Bill Bujarski, who serves as the village building inspector, to work a double shift on Sunday and Monday because his relief could not get to the office, Campbell said. Overnight 11 drivers who had parked on the street got tickets and a few motorists who tried to drive and got stuck, called the police department for assistance, he said, adding that he tried to help Bujarski handle the load. “Everything went really smooth overall,” He confessed that he did not mind being out in the snow. “I kind of enjoy it, myself.”

Locals and visitors out in the snow
So does Westchester resident Laura Reber, who purposely came to Cold Spring with a friend on Sunday afternoon. “I’d always wanted to be here for the snow. We came up about 3 p.m. - on Sunday and checked in at the Pig Hill Inn, on Main Street. In the morning, her friend left around 11 a.m. but Reber, a teacher in Cortlandt, explored the village. “I went down to the river to take a picture. It was very windy. I’ve never seen it frozen like this. It was very windy,” as well, she said, as she finished a snack at The Depot 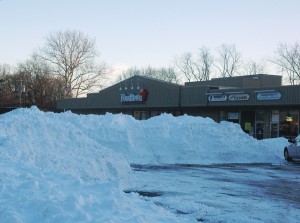 Restaurant in early afternoon. Despite the wind and cold, “it was perfect,” outdoors and streets and sidewalks were clear, too, she said. “Cold Spring cleans right up.” The staff at The Depot said the restaurant had opened at 11:30 a.m. as usual and, by 3 p.m., had served 24 customers. A 25th arrived a few moments later.

Up the street, Kevin Semple manned the counter at Hudson Valley Outfitters. Semple, who lives off Lake Surprise, said “it wasn’t bad, actually,” in North Highlands. “They were plowing all night,” he said, of the town highway crews. The store opened at 11, the normal time, and quite a few customers had arrived by mid-afternoon, he said. In such weather, “we do a lot of hats, gloves, sox, things like that,” he said.

Near the traffic light on Main Street, the lawn at St. Mary’s Episcopal Church attracted swarms of children and parents, sledding and playing.

At Grey Printing, on Chestnut Street, Ruth Eisenhower said she got to work at 9 a.m., walking in the street from her home on Northern Avenue. 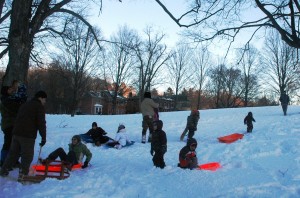 She, too, reported that the streets were clear, attesting to the diligence of the village crews. Business at Grey’s was sporadic all day, though “we’ve had a lot of visitors,” she said in late afternoon. Foodtown, a few shops away, and the post office, also drew patrons, and cars filled much of the parking lot, which was bordered by mounds of snow. At home, Eisenhower said, “the wind blew off my rabbit shed” in the yard. The bunnies stay in a separate hutch, however. “Their hutch was full of snow but they love it,” she said. “They’re angoras.”
Photos by Liz Schevtchuk Armstrong

One thought on “Philipstown Digs Out after Snow Storm”