I think the year was 1967. This guess is based on what I remember as a certain interplay between the emerging counter-culture and the dustier mid-20th century types; echoes of Franklin and Eleanor were still noticeable in the bearing of the older folks.

This was a day-trip for us, across the state line of our predictable suburban Connecticut homeland and into New York’s mildly exotic Hudson River Valley. More explicitly exotic was our specific destination of Tivoli. Not the town in Ulster County, exactly, but a scenic farm on the banks of the Hudson that took its name from the nearest village. A Catholic Worker community had settled on the farm to raise chickens, grow vegetables and, more significantly, follow the Social Gospel example of Catholic Worker founder Dorothy Day by harboring refugees from the Bowery.

It was stunning, at age 7, to cross the threshold into the farm’s communal dining hall and be forced to take cover as a disturbed and irrational woman decided to even some score by weaponizing a nearby cylindrical flatware caddy. Since I wasn’t conditioned to react to paranoid delusion, I initially took her threat to be an elaborate attempt at the kind of broad humor I sometimes saw on the Red Skelton show. But when she released her cocked arm to let all those countless forks fly, the effect was like that of an improvised, home-scale daisy cutter with the potential for permanent disfigurement of anyone who was slow on the duck-and-cover. She was invited to Tivoli by the  Catholic Worker community, not so much  with an unreal expectation that she’d  contribute productively to the  farm chores, but more, simply, to heal the wounds of her likely schizophrenia and alcoholism.

Later, I wandered onto the porch of a house situated on the southern end of the grounds and fell into a conversation with a man who functioned at a nominally higher level than some of the others. This distinction came with benefits, one of which was the informal title of farm caretaker. And of that came the subsequent benefit of being the exclusive resident of the house which I came close to entering unwittingly. There were other privileges exercised by this caretaker, like showing off his cigarette-rolling skills, inviting others to marvel at his pot belly as if it were the prize watermelon at a country fair, and making what, in hindsight, I’ve come to recognize as categorically lewd and horrifying overtures to 7-year-olds. 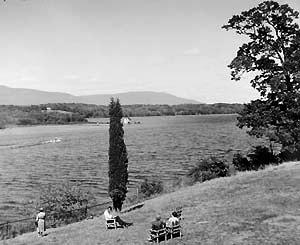 Tivoli (Photo courtesy of the author)

In spite of being shaken by my exposure to these tragicomic Bowery refugees, I was experiencing a corresponding tranquility. I was far too young to have had the capacity to meditate thoughtfully on the damaged humans staying at Tivoli that summer. Still, as horrifying as they were to my young eyes, there was a consolation. Looking just beyond the expansive, sloping lawn, I was mesmerized by my first-ever sighting of the elegant and majestic Hudson River. It was a view that captivated me like nothing else in my childhood and marked the beginning of my applying meaning to things of beauty.  At 7, I was a work in progress at best, but I must’ve become nominally aware during our visit to Tivoli of Peter Maurin, the spiritual father of the Catholic Worker movement, who, even in 1967, had been long deceased. He didn’t live long enough to see Tivoli, yet that farm was in so many ways the embodiment of the inspiration he provided to the Catholic Worker community that ran the place. Among Peter’s many contributions was the Friday evening tradition of holding a roundtable for the purposes of discussion and reflection, which he called“Clarification of Thought.” I couldn’t, and didn’t even try, to get my head around the concept at the time. I only remember references to the term clarification of thought and the enjoyment I felt over the pacifying quality of those words. Roaming around on Tivoli’s lawn that day under a peerless blue sky, I began to quietly cobble together a formulation that I’d only be able to articulate years later as an adult; the Hudson River looked like “clarification of thought sounded.”

Forty-some odd years later, I’m back in the Hudson Valley, not for a day trip this time, but finally, after a lifelong love affair with the area, to live. Having spent the past two decades in San Francisco, my wife and I wanted to once again be close to our aging relatives, our beloved New York City, and of course, have access for the first time in decades to edible bagels. I’ve come to learn that picking up the pieces of your life and relocating from one side of the continent to the other comes with an industrial dose of stress. And my body offered a resounding Amen shout-out in the form of a heart attack, suffered in late winter of this year, just months before the planned move.  Upon first arriving here at the height of July’s triple-digit temperatures, I took an evening to myself, away, for the first time in weeks, from my wife, my son, and his best friend who had joined us for the cross-country trip. I was also away, for the first time in weeks, from my dog; my Toyota; the freeway fast-food with its familiar to-go aftertaste; the sight of the billboards throughout the Midwest, which, ironically alternate their sex-shop ads with right-to-life messages; the anxious thoughts about my newfound joblessness and the cigarette jones I’d had since the heart attack forced me to quit. In this rare and tranquil moment, I wandered down to the Cold Spring waterfront just in time for sunset and there it was, reflected on the water like the orange and purple hues of the late day sun: clarification of thought.

I haven’t yet been welcomed in Cold Spring by the detonation of an improvised daisy-cutter or the offering of a lewd overture. Unfortunate, but hey, I’ll always have my emotional scars. Still, this town does offer a powerfully strong sense of place. I felt it immediately. Maybe there’s something about the sound of a train or the sight of a waterfront streetlamp in the shape of a shepherd’s crook which brings that on. Or maybe it’s that I sense a part of my own spirit here. Some piece of me that was left to the river at age 7 and is still traveling to the ebb and flow of the esturial tides. A return to the river. It’s nice to be home.

2 thoughts on “Home to the Hudson”