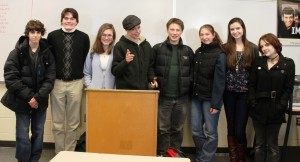 When Haldane English teacher Dr. Richter found out about the national Poetry Out Loud Contest, a competition in which students must memorize and recite famous poetry, he immediately decided to get his students involved. He suggested the idea to the Haldane Literary Magazine staff, and members unanimously agreed that Haldane should definitely participate. The primary focus of the Literary Magazine staff so far this school year has been organizing and preparing for the Poetry Out Loud Contest. And finally, on Monday, Jan. 7, their work paid off.
Each school participating in the contest must hold its own competition in which they choose a few students to move on to the Regional competition. Eight Haldane students took part in the school competition, which occurred on Jan. 7 after school in Dr. Richter’s classroom. The Literary Magazine staff, among other students, made up the audience, and Superintendent Villanti was also attended. The judges of the competition were social worker Mr. Many, English teacher Ms. McAvoy, and Principal Mr. Alm. Each judge scored the students on criteria including physical presence, understanding of the poem, voice and articulation. Dr. Richter served as the prompter and had the job of giving participants clues if they needed help remembering parts of their poems.
The ice breaker in Haldane’s competition was junior Conor Austin, who recited Thomas Hardy’s “The Man He Killed.” If he was nervous, he did not appear so. Audience members like myself felt nervous for our peers at first, but after Conor’s impressive performance, nerves subsided. The classroom had an intimate, laid back atmosphere from then on. Malachy Cleary, a senior, gripped the audience with his recitation of William Butler Yeats’s “The Second Coming.” Up next was sophomore Nicklas Clemente, who recited Robert Frost’s “Fire and Ice.” He summed up what this contest was all about: as he made his way to the podium, he said “I’m going to do this to have fun.”
Next up was senior Tess Dul, who recited Sylvia Plath’s “Blackberrying.” Mina Elwell, a freshman, followed with Percy Shelley’s sonnet “Ozymandias.” Senior Chrissy Glorius then recited Elizabeth Bishop’s “One Art.” When asked how her participation in this competition changed her feelings about poetry, Chrissy responded, “I learned that poetry really packs a lot of emotion into itself. And the human element in poetry is heartwarming.” Sophomore Lindy Labriola and junior Jack Quigley stole the show with their recitations of Henry Wadsworth Longfellow’s “A Song of Life” and William Blake’s “The Tyger,” respectively. They each demonstrated superior understanding articulation of their poems.
The judges chose Lindy, Jack, and Malachy as the three winners from Haldane. They will move on to the Regional competition, which will take place in Albany some time in February. All participating students performed brilliantly. Dr. Richter felt proud that his students learned to appreciate poetry from this event. He made sure to say, “This is Haldane’s first annual Poetry Out Loud Contest, and I hope this will become a regular event for our school.”

Virginia Califano is a senior at Haldane.

Sidebar: What is the “Poetry Out Loud” Program?

Taking note of the popularity of poetry slams, rap, and other new ways of vocalizing the written world of poetry, the National Endowment for the Arts and the Poetry Foundation have come up with the Poetry Out Loud program, which is a national effort, begun in 2006, to invigorate the study of poetry and turn high schoolers on to it as a palpable and of the moment art form.
Building from local to regional to state to national competitions, Poetry Out Loud begins in the classroom, with a comprehensive list of over 650 poems to choose from, guides for teachers to use and audio-visual tapes and discs which eloquently convey the myriad of approaches to the recitation of poetry, from quiet introspection to full-on emotive flourish.  Last year nearly 325,000 students competed.  This year’s finals take place in Washington, D.C. at the end of April.
The goals of the Poetry Out Loud program including helping students “master public speaking skills, build self-confidence and learn about their literary heritage. Students are encouraged to:

“¢           Listen to poems being recited, and to the commentaries of the performers.
“¢           Find passages in poems which they find striking or memorable.
“¢           Imagine situations in which those passages may be put to use, whether to console, encourage, taunt, flatter, or otherwise make an impact on a listener.

On the Poetry Out Loud CD, poet and former Chairman of the National Endowment for the Arts, Dana Gioia, spells out “four practical advantages to be found in studying and reciting poetry:

“¢           Poetry offers mastery of language, and stocks the mind with images and ideas in unforgettable words and phrases.
“¢           Poetry trains and develops our emotional intelligence.
“¢           Poetry reminds us that language is holistic—that how something is said is part of what is being said, with the literal meaning of words only part of their whole meaning, which is also carried by tone of voice, inflection, rhythm.
“¢           Poetry lets us see the world through other eyes, and equips us imaginatively and spiritually to face the joys and challenges of our lives.

For more information on the Poetry Out Loud program, including the full listing of poems, guides for teachers, and a feature on “Poet of the Day,” visit .

Click this link,  to view a feature on CBS News Sunday Morning show on the 2009 competition, featuring many of the impressive performances.