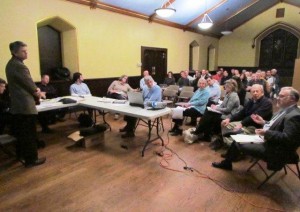 The public information meeting held on Feb. 15 to take a near-final look at the draft Village of Cold Spring Comprehensive Plan yielded very little in the way of substantive comment from residents. Approximately 25 people attended the meeting along with the Village Board and the village attorney. Some members of the Special Board that had drafted the original Comprehensive Plan document were also in attendance. The plan submitted by the Special Board late last year has been reviewed line by line by the Village Board, which made a number of revisions. As required by state law, a formal public hearing on the Comprehensive Plan is scheduled for Tuesday, March 1, 2011, at 7:30 p.m. at the Episcopal Church of St. Mary-in-the-Highlands.
After Mayor Seth Gallagher presented a quick power-point review of the plan’s highlights, comments from the floor centered on the Cold Spring Boat Club and how it is dealt with in the plan — along with procedural questions and comments regarding further opportunities for public comment on the plan.
Mark Patinella, a member of the boat club, encouraged the Village Board to look across the Hudson River to Plum Point in the Cornwall-New Windsor area to a multi-use building established on the waterfront there. He said such a project on Cold Spring’s riverfront could achieve much of what the plan seeks to accomplish. Patinella said the building has created a real sense of community, serves as a senior citizen center and is rented out to community groups. He described it as a “win-win” project that generates revenue for the municipality. “We’d love to have Dockside back — a majority of us at least — but we realize that’s not going to happen,” he said.
Dave Deveco, also a boat club member, questioned a recommendation in the plan that suggests that if the boat club building is torn down during the clean up of coal tar on the property that the village should “rethink the uses of the entire property from the river to Market Street.”  Deveco said,”We have been good stewards. We’ve put a lot of money into it. There was no bulkhead there until we put in. Everyone is welcome there.”
Comments have been made during the planning process suggesting that the boat club has not always been welcoming to outsiders and the issue of improved community access is addressed in the plan. Gallagher said that some of the language used in recommendations regarding the boat club is “kind of fuzzy and needs to be clarified.” Mike Armstrong, who chairs the Special Board, said that the plan calls for the village to “work with” the boat club to determine its future and that dictating to or ignoring the club’s wishes “is not in the picture”¦It’s a large property. Don’t be blind to that.  It just makes sense to look at the whole property” he said.
Another boat club member, Charles Merando, listed ways he feels the club has contributed to the community since it was established in 1955 – including money spent in stores and restaurants by 4,000 visitors who use its docks each year. He described as “not user friendly” the plan’s recommendation that public restrooms be established at the club along with a user fee.  He also said that the site cannot handle uninvited guests. “We don’t have room and don’t want anyone who is not a member using our facilities.”
Gordon Robertson, a former village trustee and a member of the boat club, questioned when the Special Board had cut off public comment on the draft plan before sending it on to the village board. Armstrong said that public comment ended at the public hearing in late on October of last year but after that “a petition and a couple of letters” were received. “It was probably sloppiness to accept them”¦I regret doing so.” He said that the “overwhelming intention was to hear from the public” but he admitted that “It may look nefarious.”
That set off a testy exchange between Gallagher and Jan Thacher who has served on the Special Board in the past and has videoed many of the public meetings as a volunteer. “I have a major problem with that,” Thatcher said. “At the October meeting I requested that the public hearing remain open to give the public more time to comment.”


“I don’t want to go over history,” Gallagher replied.

“I don’t care!” Thacher shot back. “If we had known letters would still be accepted we would have commented. Some input was accepted and some was not.”

Robertson expressed concern that he couldn’t compare the latest draft of the plan with the older version. After an exchange with the mayor in which Gallagher said that the drafts were readily available at the village office Robertson suggested that a “red line” version be produced to clearly show where revisions have been made. The fact that the draft Comprehensive Plan was recommended by the Special Board by a vote of 5 to 4 was also a cause for discussion. Resident Peter Henderson suggested that the vote was an indication of only “marginal support” and that a broader consensus was desirable.
Trustee Ralph Falloon said that when he first learned of the 5-4 vote, “ I wanted nothing to do with it (the plan).” But he said, “We moved ahead with the process instead of getting in the middle of a lot of dissension. The public hearing is the time to get it out. Now is the time to seriously look at everyone’s comments. All comments are now to us (the village board) not to the Special Board. It’s now completely ours. It will be easy to integrate (comments). Let’s leave the dissension behind.” Catherine Square, a member of the Special Board, bristled at Falloon’s use of the word dissension. “I take exception to that. There was no dissension. There was a difference of opinion.”
Michele Gregg, a consultant with the firm Green Plan ,which has assisted the village with the late stages of the plan said that “by law the village must proceed with the public hearing at this point.” Gallagher said that “once we get past the 90-day requirement we’re not constrained.” The state requires that the public hearing be held within 90 days once the Village Board has acknowleged receipt of the recommended plan from the Special Board.
Photo by M. Turton