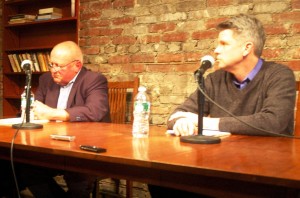 Cold Spring’s once and current mayors clashed Wednesday night over who should be hold the title in the future, arguing about finances,  access to village dams, and use of the waterfront. The debate between former Mayor Anthony Phillips and incumbent Mayor Seth Gallagher, both natives of Cold Spring, came at a forum sponsored by Philipstown.info, with publisher Gordon Stewart as moderator.


Elected in 1993 and ousted by Gallagher in 2009, Phillips seeks to regain his former office for, as he put it, “the same reason” he originally ran: “I didn’t like what was going on and I knew I could do better. This time I’ve watched the residents be put on the back burner. The special-interest groups, along with administration decisions to overlook residents’ opinions, began to be common. Issues are being rushed through without proper communication to the residents.”  As an example of lax communication, he cited posting of the agenda the evening before a Village Board meeting.
Gallagher responded that under Phillips, “no agendas at all were posted for the meetings, especially for workshop meetings where most of the work happened.” A trustee from 2006 to 2009, he said he got involved in politics because “I saw the way things were being run. There was no transparency.” During his tenure as mayor, “I think we’ve achieved a lot,” he added. He praised the village employees but said he had “been a leader on a number of issues where I have made a huge difference for the village. One of the big ones was the financial situation that had three straight years of deficits under the former mayor.” According to Gallagher, “when I took over there was a $95,000 deficit. In two years that turned around to a $124,000 surplus. That allows us to do things we couldn’t normally do. It also allows us to keep our tax increase down.”
Phillips contested Gallagher’s account. “I’ve got to take exception to the fact that he took a deficit of $95,000 over,” Phillips said. “Over a period of three years we had large deficits in our budget,” he said. “By May 2009, the deficit was $473 which was still outstanding considering what we had been through the previous three years. As mayor I can accept responsibility for everything that transpired during my administration of 16 years. But by no means does responsibility stop with me. Keep in mind there are five elected representatives.” He observed that Gallagher served as a trustee for three years “on my watch” and that for all of his 16 years as mayor, plus his predecessor’s four years, the same unnamed office-holder oversaw village fiscal affairs. “There was no finer man to be budget officer. He knew the numbers. He was a trustee,” Phillips said. He claimed that when he and Gallagher were both on the Village Board, both received the same updates on finances. “So for him to be surprised by some of these things, that’s good play. It’s not the truth.”
Gallagher read an e-mail he had written in spring 2008, part of what he termed ongoing attempts to get information about the financial situation, and also cited a 2009 New York State Comptroller’s report that criticized village management. According to the comptroller’s report, “the village incurred operating deficits totaling $197,677; $123,159; and $32,457 in the general fund for the fiscal years 2005-06, 2006-07, and 2007-08. As a result,” the report added, “the village ended fiscal years 2005-06, 2006-07, and 2007-08 with unreserved general fund balance deficits of about $37,276;  $127,286 and $95,895,” respectively. Transfers from the water and sewer funds helped offset some of the shortfall. “The village’s deteriorating financial condition was mainly caused by over-expended budget appropriations, inaccurate accounting records, and unrealistic budget estimates,” the comptroller’s report added.
Gallagher contended that under Phillips, “there was huge spending without any attempt to control it. His numbers are totally off. He continues to deny the facts.” Gallagher said his administration had handled budgets better and found new says to generate money, from small sources such as rental of the village bandstand for weddings, to fees paid by businesses in lieu of providing parking places, to some $18,000 in the recycling program. “The goal right now is to reduce the reliance on property taxes through other revenues,” he said.

Dams and infrastructure
During the past two years, “we’ve also started working on urgent infrastructure problems that had been forgotten for years,” including dams that had overall “had basically no maintenance for decades,” Gallagher said. He said that about three years ago the village received a letter from the state Department of Environmental Conservation with “warnings for the [Upper] Dam,” part of the village water supply system. The trustees did not learn of the letter; meanwhile the DEC notified the village insurer and Cold Spring lost its insurance, Gallagher said. “We had to switch insurance companies because of that and we still don’t have umbrella insurance coverage,” he said. “Since then we’ve had an engineering report on the dam and they say the Upper Dam is unsound and requires urgent work. One of the things I really pushed to do was negotiate an easement to the landlocked Upper Dam; that’s been a problem for years. So now we have access to it. We can actually get in and do the repairs.”
Again, Phillips took issue. “There was access to the upper bridge [dam] with the agreement with the developer” of nearby land, he said. He also criticized Gallagher’s relationships with Putnam County Legislator Vincent Tamagna as “strained.” By comparison, under his own tenure the county helped the village acquire its trolleys and began assisting with weekend trash collection, he said. Better relations “is one of the issues I would address immediately,” Phillips said. Gallagher pointed to new inter-municipal agreements for sharing equipment and services with not only Putnam County but the Town of Philipstown. “It’s a great benefit. We’ve saved a lot of money that way,” he said.

Village uniqueness and the waterfront
In a rare sign of unanimity, they both emphasized the importance of retaining the village’s unique character. Phillips spoke of the need to balance tourism with the concerns of residents, who “have to be protected. Weekends are very difficult for the residents.”
“I think we have to take things slowly,” said Gallagher, who recommended programs and events that can appeal to both visitors and villagers. They parted company again over the waterfront. “I would get residents much more informed about what we’re trying to do at the river rather than try to slip something through and put a boat down there eight months a year and having everybody riled up about what we’re doing down at the waterfront. We don’t want it that way,” Phillips said. He apparently referred to a request by the owner of a former Coast Guard vessel to give tours from the Cold Spring dock, using it as a base seasonally. “I can tell you the majority of the people are definitely against having a boat docked down there eight months.”
Under Gallagher, the Village Board has been considering a change in the law to allow commercial vessels, such as small tour boats, to use the village dock by permit. Having the ex-Coast Guard boat for long stays is a separate question, he said. “That would have to be decided at a future date. It seemed to make sense. We want to entertain it.”

The Philipstown.info Candidates Forum was divided into two parts, with the mayoral candidates appearing first. A separate article about the trustee candidates will be published at a later date.

One thought on “Mayoral Candidates Spar at Philipstown.info Forum”