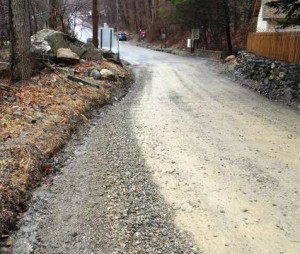 The southern end of Old Albany Post Road is often a problem after storms.

Aside from the damage they did to Philipstown’s system of dirt roads, the heavy early March rains threatened to puncture the town’s budget while still only in the first quarter of the fiscal year.  The rains also resurrected the contentious question of whether maintaining the dirt roads with expensive materials that erode quickly instead of paving them with asphalt is the best course for the future.
Most dirt roads in Garrison are repaired and open with two exceptions.  Indian Brook Road East, just beyond the last Philipstown residence, will remain closed for the foreseeable future because about 1,000 feet of it completely washed away.  Opening the infrequently used thoroughfare, which leads through woodlands to Dennytown Road in Putnam Valley, is not a priority, according to Town Supervisor Richard Shea.  None of the Town Council members attending a March 16 workshop meeting appeared to disagree. All nodded grimly as Town Highway Superintendent Roger Chirico informed them that material costs alone to reopen Indian Brook Road East are estimated at $77,500 without including labor and possible extra machinery.  Chirico said his budget did not anticipate this expense and Shea responded that the town would have to float a bond if and when it decided to reopen the road.
Chirico said it was likely his staff could complete the repair of Indian Brook Road but that the time involved combined with time already spent doing road repair and dealing with the high amount of snow this past winter would threaten other road work scheduled for later in the year unless additional funds were forthcoming.  Philipse Brook Road also remains closed at one section near Frazier Road with residents at number 98 still unable to use their driveway for access to their home. Chirico hasn’t yet estimated the cost for these repairs but he has said that materials costs for the other area dirt roads have already exceeded $16,000.  Even factoring in labor costs, the damage numbers are not yet near the several hundreds of thousands of dollars Shea thought when he first surveyed the roads. Still, the problem is not insignificant at a time when governments at all levels are reining in costs and spring rains have yet to begin. 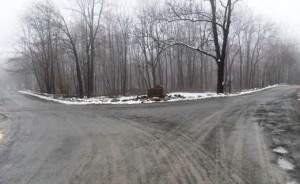 Because Indian Brook Road East is not critical to Philipstown residents, town officials can afford to postpone consideration of the cost of maintaining dirt roads that often require repair when storms hit the area, which, as Shea has pointed out, are occurring with greater frequency and severity.  However, it is easy to imagine the Town Board in crisis-mode if the next storm necessitates an expensive repair or prolonged closing of a more widely used road such as Old Albany Post Road. Shea has said previously he intends to assemble a special group to discuss the town’s approach to the dirt roads going forward with an eye toward ending the cycle of extensive damage and repair. He said the group would include members of the Old Road Society of Philipstown (ORS) and other like-minded residents who in the past have generally resisted efforts to pave roads they consider both historically significant and critical to preserving a rural character for the Garrison area.
The ORS was founded in 1984 with the primary goal of protecting the Old Albany Post Road, which received a listing in the National Register of Historic Places in 1982 along with Indian Brook Road.  From the ORS perspective, the approximately six miles of unpaved Old Albany Post Road are all that remains of the original road system that can be traced back to the 17th century when the Dutch connected New Amsterdam (New York) with Albany with a road carved from old Indian trails.  Later, George Washington and Continental Army troops used this particular section of the road as a critical transport link in the Revolutionary War. A citation for historical significance doesn’t mean a road cannot be paved.  According to spokesperson for the N.Y. State Office of Parks, Recreation and Historic Preservation, the state — and, by extension, the federal government — would generally not be involved in a local paving issue unless funds from one or both of those entities were involved in the project.
“The Old Road Society has always been interested in developing a comprehensive approach to maintaining the dirt roads,” said Noel Kropf, vice president of the organization when asked about Shea’s initiative.  Kropf readily acknowledged that recent storms had done significant damage and that there are particular sections of the dirt roads that are serious problem areas, such as the southern end of Old Albany Post Road, and therefore require discussion to arrive at a more permanent solution.
For Chirico, a blunt-speaking veteran of road building and maintenance, the appropriate response to the ongoing problem is crystal clear. Paved roads hold up to storms, drain water efficiently, can be plowed more easily, are easier to drive on and cost taxpayers far less to maintain than dirt roads whatever their historic significance.  “No money comes with being on the National Historic Register,” said Chirico.  “It costs the town approximately $75 a mile to maintain paved roads and $704 a mile to sustain dirt roads, including man-hours and materials.  We are throwing good money after bad,” he said. Kropf observed that a discussion of costs should include an amortization of the initial cost of paving a road along with maintenance.  He said a study done for the town 15 years ago indicated there wasn’t such a great cost disparity when this formula was used and factored over a 15-to-20-year period. 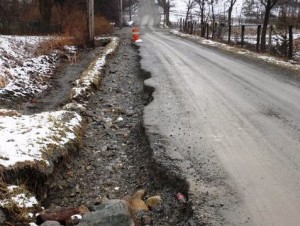 Dirt road is really a misnomer.  Maintaining and repairing such roads (also known as gravel roads) involves a blend of road materials ranging from large stones called tailings, crushed stones and Item Four, a mixture of crushed stone and stone filings. The work also includes frequently repairing or replacing pipes and catch basins to facilitate drainage. “Since I have been here I’ve put 6,000 feet of storm drain and 250 catch basins in the ground on dirt roads, said Chirico, an elected official serving in his 12th year. He explained the sides of these roads can never get hard enough to hold and guide water to drains and eventually they collapse from water running off the road and backing up from debris-clogged pipes and basins.
By contrast, Chirico said hard-surface roads do not wash out. Catch basins can be farther apart because water stays on the surface of the road and then is eventually directed to basins by the grade or a curb.  “To get water efficiently to a pipe you need a consistently hard surface,” he said. Kropf was reluctant to respond directly to Chirico’s assertions, not wanting to make the issue personal.  “I would just say that highway officials in general want to make roads as fast and smooth as possible and dirt roads are bumpy and slow.”
In the aftermath of the recent storms, Supervisor Shea referenced the paving of East Mountain Road North 10 years ago as a success story given the absence of damage to the road.  Chirico, an independently elected official who chafes at the Town Board making decisions on roadwork by his department through the budget process, was bemused at hearing Shea cite East Mountain.  He recalled the paving project went ahead only after a court battle due to strong resistance by local residents, the ORS and Richard Shea, among other officials. Chirico, who at 78 intends to seek re-election this year, said he anticipates a vigorous political battle over the dirt roads but he is comfortable in his certainty. “If paving those roads wasn’t the right way to go, Route 9 would still be dirt, the Thruway would still be dirt,” he said.
Photos by K. Foley

2 thoughts on “Clash of Rural Character and Taxpayer Costs”